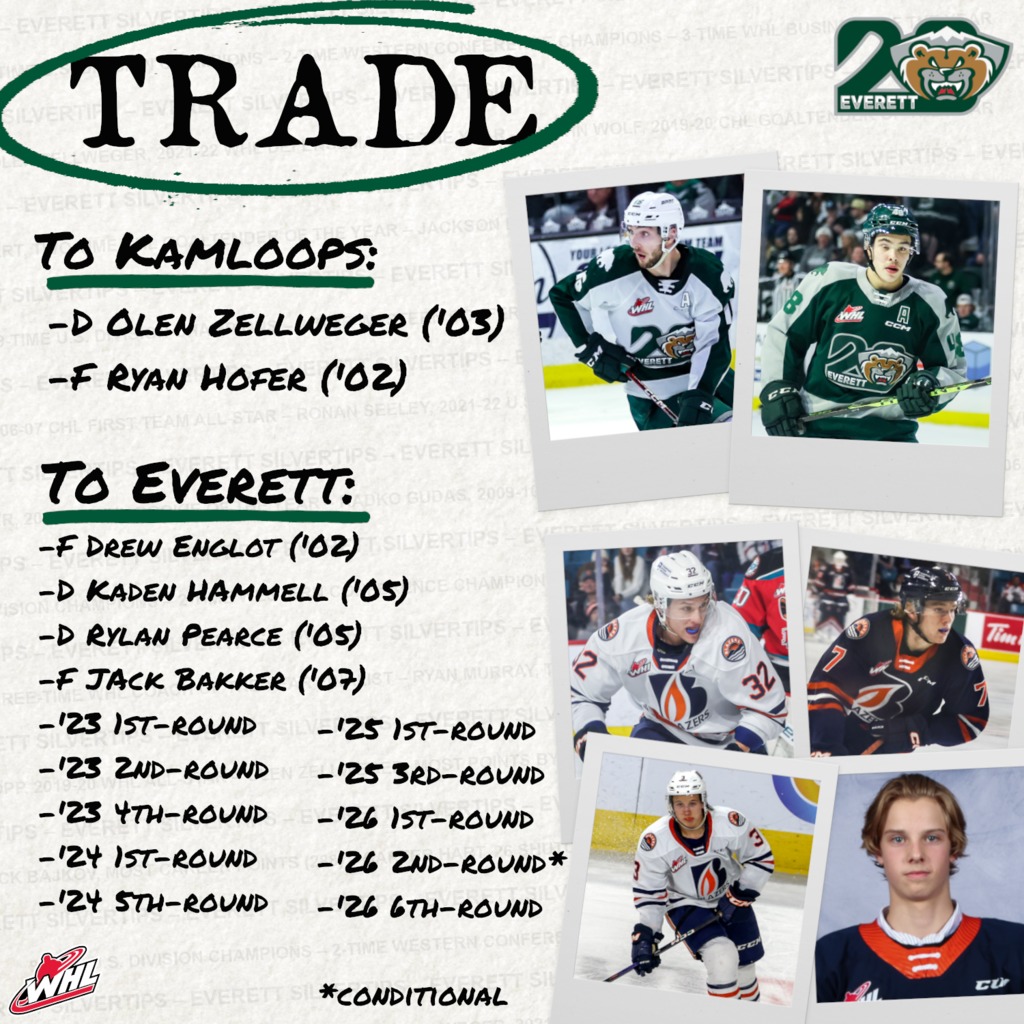 “It was a very tough decision to part with Olen and Ryan as players who we’ve coached and developed from day one here in Everett,” commented Silvertips general manager/head coach Dennis Williams. “At the end of the day, we’re able to bring in players with valuable experience and good battle level in Drew [Englot] and Kaden [Hammell] while putting us in a good position to grow and compete as an organization for the next few years.”

Zellweger, an ’03-born defenseman, has recorded 10 goals and 18 assists this season in 23 games played. The Anaheim Ducks prospect is fresh off winning a gold medal with Hockey Canada at the 2023 World Junior Championship, his second consecutive gold medal and third representing Canada on the international stage. Originally selected by the Silvertips in the second round of the 2018 Draft, he finishes his Silvertips tenure with 28 goals and 103 assists in 148 games played, plus a WHL Defenseman of the Year award from the 2021-22 season.

“Olen is one of the hardest-working players I’ve ever had the pleasure of coaching,” Williams noted. “He’s been a tremendous performer for us on the ice and an even better teammate off it. He’s shown incredible commitment over the years, with an elite skillset and just great character.”

Hofer, an ’02-born forward and Washington Capitals prospect, has 23 goals and 13 assists through 34 games played in his final season of junior eligibility. He earned the Most Improved Player honors at the Silvertips Team Awards last season, growing into one of the most dynamic power forwards in the league. After joining the Silvertips as an undrafted signee in 2020, he completes his time with the Silvertips with 54 goals and 49 assists in 125 games played.

“Ryan is as honest a hockey player as they come,” praised Williams. “He’s got an incredible work ethic, he’s hard on pucks, and he’s truly emerged as a respected leader in our room. The growth that he’s shown in his time here is remarkable, he’s become a real force on both sides of the puck.”

“We know they have tremendous pro hockey careers ahead of them,” he continued. “We’re proud to have called them Silvertips for the majority of their junior careers and wish them nothing but the best as they progress to their next chapter.”

Englot, an ’02-born Candiac, SK native, is in his fourth WHL season. He comes to the Silvertips with three goals and 11 assists in 34 games played this season. Last season, he finished with 38 points in 66 games played, with an additional nine points in 17 playoff games in the Blazers’ run to the WHL Western Conference Finals. The 20-year-old will occupy Hofer’s vacated overager slot on the roster.

Hammell, an ’05-born Langley, B.C. native, is in his third WHL season on the blueline. He has registered six goals and four assists in 36 games played this season, giving him 24 career points in 100 appearances.

Pearce, an ’05-born Martensville, SK native, made his WHL debut in September this season. He recorded two assists in eight appearances before being assigned to the Flin Flon Bombers of the Saskatchewan Junior Hockey League, where he has skated in four games this season. Pearce was originally drafted 85th-overall in the fourth round of the 2020 WHL Draft by Kamloops out of the Martensville Marauders program.

Bakker, an ’07-born White Rock, B.C. native, was selected 57th overall in the third round of the ’22 WHL Draft. The 15-year-old has 11 goals and four assists in 13 games played with Delta Hockey Academy’s U18 Prep squad. He was named a John Reid Bantam All-Star in 2021-22, and will represent Team British Columbia at the 2023 Canada Winter Games.