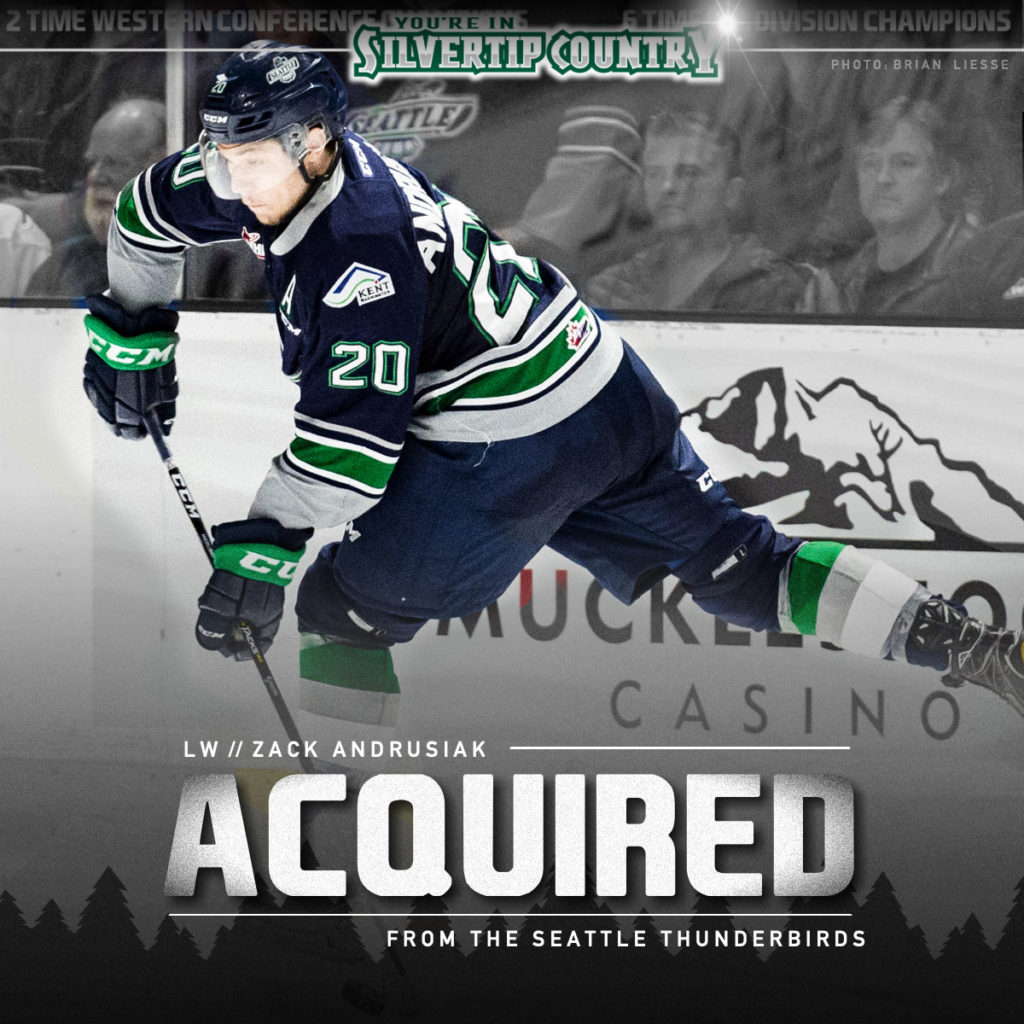 Andrusiak, 20, ranks fourth in the WHL with 27 goals in 34 games and joins the Silvertips roster previously as the Thunderbirds leader in points (39), also competing in 18 games in the 2017 WHL Playoffs, en route to the Thunderbirds capturing the WHL title and a berth in the Memorial Cup.

“We set a goal leading up to the trade deadline to make a significant offensive upgrade for our club and Zack Andrusiak was a player we’ve targeted for a while who meets our needs,” said Davidson. “He’s a finisher and respected as a proven goal scorer in the Western Hockey League. His capabilities to produce against familiar competition within our division and experience two years ago on a team that won a WHL championship are valuable elements we’re excited to add to a group we’re already very proud of. We look forward to warmly welcoming Zack to the Silvertips family and adding him to the roster in time for our next game on Friday against Tri-City.”

“Acquiring a player with Zack’s abilities was too good of an opportunity to pass up. We recognize those opportunities come with a difficult decision with regards to our roster. For two-plus seasons, Sean Richards was a player for us who wore his heart on his sleeve, wore the Silvertips colors with pride, and contributed to our run last season to the WHL Championship Series. We’re grateful for that and thank Sean for everything he gave during that time. We wish him all the best and he will always be a part of our family.”

The 5-foot-11, 178 pound forward shattered career highs last season as he led the Thunderbirds in goals (36), and was third in points (74) in all 72 games. He has five career hat tricks and 12 career multi goal games, had a goal and pair of assists in 18 postseason games in the 2017 WHL Playoffs, and additionally suited up in three Memorial Cup games. Originally a listed prospect of the Tri-City Americans, he has 124 points and 69 goals in 173 career WHL games with Tri-City, Prince Albert, and Seattle, along with three goals and a pair of assists in 23 career postseason games.

Against opponents of the U.S. Division, Andrusiak currently has 20 points in 19 games this season.

Richards, 20, had ten goals and 18 assists, 46 penalty minutes and a +16 rating in 27 games this season with the Silvertips and last year captured career-highs in goals (20) and points (49) in 64 games, additionally notching four goals and eight assists in 22 playoff games as the Silvertips captured the Western Conference title. He was originally acquired from the Regina Pats on July 22, 2016 along with a fourth round selection in the 2017 Draft and conditional selections in exchange for left wing Dawson Leedahl and the rights to forward Tyson Jost. He has 108 points, 243 penalty minutes and a +24 rating in 212 career WHL games with the Silvertips and Pats.

The Silvertips next face the Tri-City Americans on Friday, a 7:05 p.m. (KRKO / Tips App / WHL Live) road game at Toyota Center and return home this Saturday against the Americans at 7:05 p.m. in downtown Everett. Tickets for Saturday’s game, along with a 4:05 p.m. Sunday home game against the Kamloops Blazers are available at www.everettsilvertisp.com/tickets.

Tickets are available at www.everettsilvertips.com/tickets.