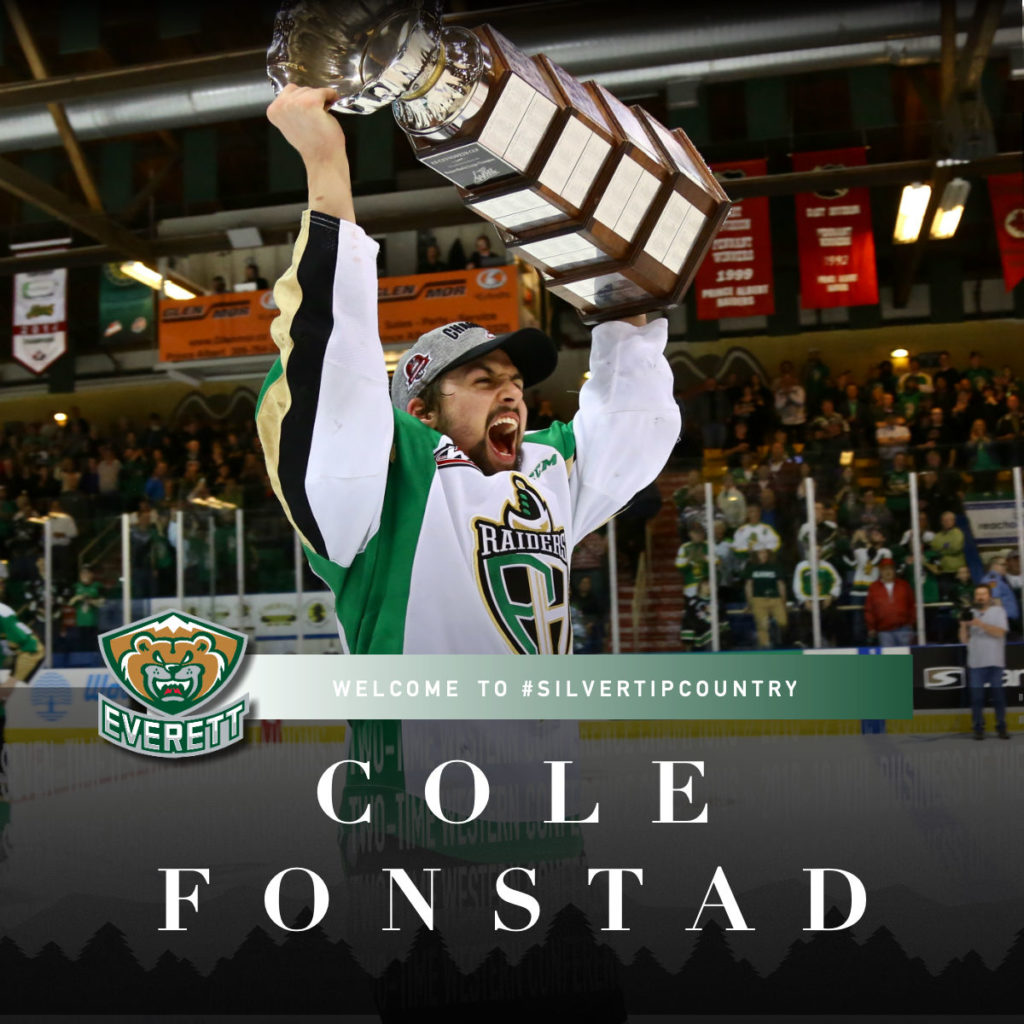 EVERETT, Wash. – The Everett Silvertips (@WHLSilvertips), seven-time U.S. Division champion and two-time Western Conference champion of the Western Hockey League, have acquired center Cole Fonstad from the Prince Albert Raiders in exchange for center Reece Vitelli, a second round and fourth round selection in the 2021 WHL Draft, and a conditional third round selection in the 2022 WHL Draft, Silvertips general manager Garry Davidson announced today.

Fonstad joins the Silvertips lineup after helping Prince Albert capture the WHL title last season and a berth in the Memorial Cup and was selected by the Montreal Canadiens in the fifth round (128th overall) of the 2018 NHL Draft. He will be available to suit up for the Silvertips starting Wednesday, when a five-game homestand continues against the Brandon Wheat Kings, 7:05 p.m. at Angel of the Winds Arena in downtown Everett.

“Cole Fonstad is a proven talent who has the tools to make a positive impact with us and fill our immediate needs offensively,” said Davidson. “He’s a shifty, prolific forward with a high level of skill and his track record of experience with a WHL title, World Junior Summer Showcase invite and status as a Montreal Canadiens drafted prospect sets an example for a core of our younger players looking to elevate their game. We’re looking forward to Cole’s arrival and welcoming him as a part of the Silvertips family.”

“Making a transaction involving individuals like Reece Vitelli is never easy. For two plus seasons, he delivered a tireless work ethic and a dependable presence in our lineup, and was an integral part of our run to the Western Conference championship in 2017-18. He’ll always be considered a part of us. We thank him endlessly for the impact he made as an Everett Silvertip, and we wish him well in the next step of his career.”

Fonstad, a 2000-born forward currently in his fourth full WHL season, will arrive in Everett with nine points (2g-7a) in nine games this season and last year helped guide the Raiders to the league championship, ranking third on the program with 73 points (29g-44a), third in assists (44), second in power play assists (14), and fourth in power play points (19) in 67 games. His 73 points matched his career high previously set in 2017-18 with the Raiders when he also led the club with 52 assists, appearing in all 72 games.

En route to the WHL title, the native of Estevan, Saskatchewan earned six points (2g-4a) in 21 postseason games, had a goal and an assist in the WHL Championship Series against Vancouver, and earned a goal and a pair of assists in three Memorial Cup games. He has 11 points (6g-5a) in 28 career WHL Playoff games and earned an invite by Team Canada to the 2019 World Junior Summer Showcase, a step in the roster selection process for upcoming IIHF World Junior Championship.

Vitelli, a 2001-born forward, leaves the Silvertips after posting 40 points (13g-27a) in 144 career WHL games and four goals with three assists in 32 career WHL Playoff games. He set career highs last season in points (27), goals (11) and assists (16) in 66 games and helped guide the Silvertips to a Western Conference title in 2017-18. He has three assists in eight games this season.