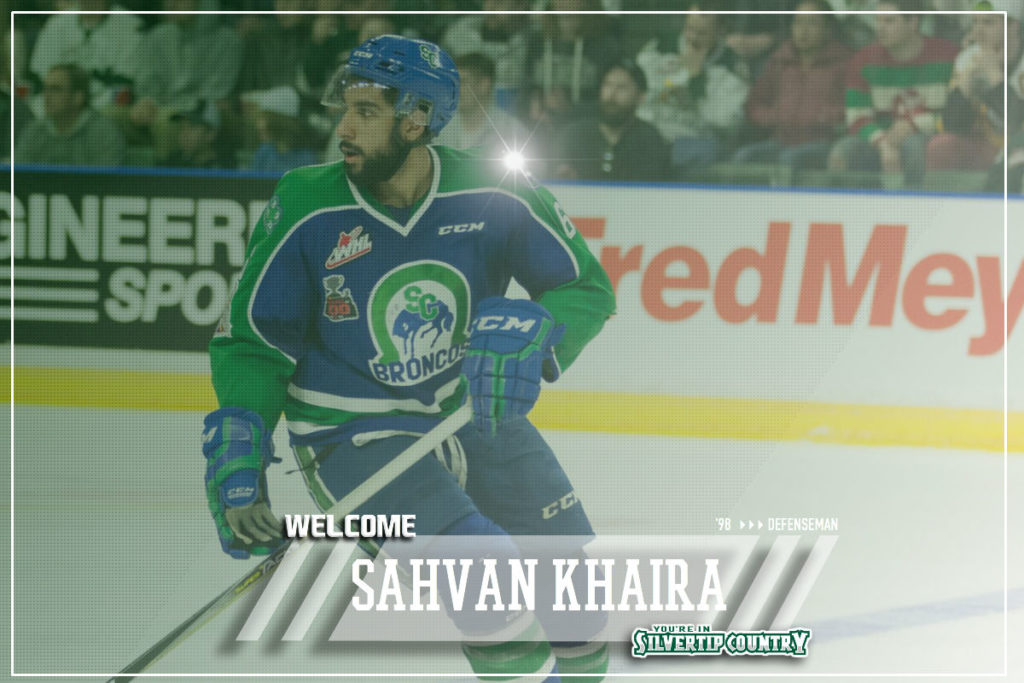 “Sahvan Khaira is a welcomed and exciting addition to our blueline,” said Davidson. “His size and experience are valuable assets to our developing group, and he made a lasting impression during Swift Current’s postseason which also caught our attention in the WHL Championship Series. He plays the game hard, simple, and honest. We’re looking forward to his contributions.”

Khaira, entering his overage season, helped the Broncos hoist the Ed Chynoweth Cup and earn a berth in the MasterCard Memorial Cup last season with a career high 26 points (6g-20a) and +16 rating in 65 games as an alternate captain, additionally racking up seven points (2g-5a) in all 26 WHL postseason games. He also earned an assist in a pair of Memorial Cup games. The Langley, British Columbia native skated in all six Rogers WHL Championship Series games against the Silvertips and collected an assist.

The 6-foot-4, 220-pound blueliner has 57 points (9g-48a) in 245 career WHL games with the Broncos and Seattle Thunderbirds and nine points in 40 career playoff games. He was originally a ninth round selection by Seattle in the 2013 WHL Draft and has participated in rookie and development camps with the Edmonton Oilers and Vancouver Canucks, respectively.

Sahvan’s brother, Jujhar, is currently skating with the Oilers as one of three players of Punjabi descent in history to reach the NHL, is one of 18 Silvertips who have advanced to suit up in the NHL, and skated with the Silvertips in 2013-14 while collecting 43 points in 59 games.

The Silvertips will announce their training camp schedule for the 2018-19 season soon.

2018-19 SCHEDULE, TICKET INFORMATION
The Silvertips open the 2018-19 pre-season schedule with the Delta Hotels Preseason Classic in downtown Everett, starting Friday, Aug. 31 in a 7:00 p.m. game against the Tri-City Americans. Ticket packages and tickets for all nine games of the Delta Hotels Preseason Classic, starting each day with an 11:30am game, will be on sale soon. The 16th season of Silvertips hockey opens Sept. 21 in Vancouver at 7:35 p.m., and the Tips return home the next night for their 7:05 p.m. home opener against the Giants at Angel of the Winds Arena. Deposits for $50 will secure a seat for the 2018-19 regular season, available at www.everettsilvertips.com/season or by calling (425) 252-5100.