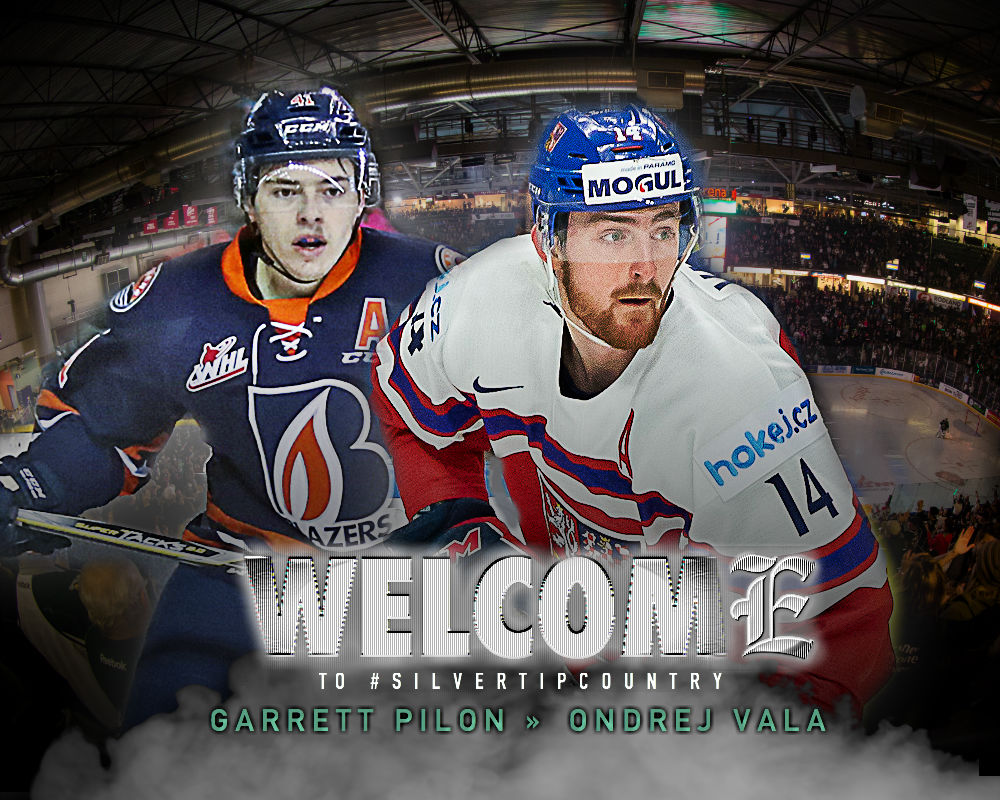 EVERETT, Wash. – The Everett Silvertips (@WHLSilvertips) and general manager Garry Davidson announced today that the team has acquired defenseman Ondrej Vala (AWN-drey, VALL-ah) and center Garrett Pilon (PEE-lawn) from the Kamloops Blazers in exchange for forward Orrin Centazzo, defenseman Montana Onyebuchi, a first round and a fourth round selection in the 2019 WHL Draft, and the rights to prospect forwards Nate Hinds and Kalen Ukrainetz.

“Today we addressed needs on our blueline and for our scoring depth which welcome individuals to the Silvertips family who carry elite abilities and outstanding credentials,” said Davidson. “Ondrej has leadership experience on an international level and combines his size with a very physical approach as a left shot on the back end. Garrett has evolved into a dependable and versatile 200-foot forward who is a threatening offensive presence, makes plays on a consistent basis, and plays the game with energy.”

“Facing the opportunity to acquire these two talented players demands us to make an extremely tough decision with regards to our roster. Montana and Orrin wore the Silvertips colors with pride and have a bright future in the game. They’ll always be a part of us and we wish them well in the next step of their careers.”

Vala, 19, is in his third WHL season with 66 points in 163 career games with Kamloops, along with 171 penalty minutes and a +15 rating. Additionally, the 6-foot-4, 210 pound defenseman has 12 games of experience with the Czech Republic national team at the U20 World Junior Championships, earning one assist while serving as the program’s alternate captain in the 2018 tourney at Buffalo. He also served his country by suiting up in four games in 2015-16 at the Ivan Hlinka Memorial Tournament.

The native of Pardubice, Czech Republic fills a vacant import slot on the Tips roster and was originally selected by Kamloops, 11th overall in the 2015 Canadian Hockey League Import Draft. Currently a prospect of the Dallas Stars, he was signed by the Stars as a free agent to a three-year, entry level contract on Sept. 29, 2016. Vala completed the 2016-17 season in the American Hockey League with the Texas Stars, earning an assist and +2 rating in three games after he posted career highs in goals (10) and points (25) in 60 games with the Blazers.

Pilon, a dual citizen of the United States and Canada, was selected by the Washington Capitals in the third round (87th overall) in the 2016 National Hockey League Entry Draft. The 6-foot, 188-pound forward made his pro debut by suiting up at the end of last season in one Calder Cup Playoff game with the Hershey Bears (AHL).

His father, Rich, skated for 14 seasons as a defenseman in the NHL with the New York Islanders, Rangers, and St. Louis Blues, earning 77 points and 1,745 penalty minutes in 631 career regular season games and adding 50 penalty minutes and a +5 rating in 15 career Stanley Cup Playoff games. All of his 139 career WHL games were spent with the Prince Albert Raiders, where he had 72 points (17g-55a) from 1985-88. Garrett’s nephew, Ryan, had 116 points in 193 career WHL games as a defenseman with Brandon and Lethbridge.

Getting a puck from Vala Ondrej? Yeah, that face says it all! 😍 pic.twitter.com/TOn9u9w3LC

I’d like to thank @blazerhockey for all the opportunities they have given me since the start of my WHL career. Great organization and I wish them and my teammates nothing but the best moving forward. I’m excited to getting things started with @WHLsilvertips

Forever a part of us.

Both Hinds (third round) and Ukrainetz (ninth round) were selected by the Silvertips in the 2017 WHL Draft.

The Tips end three games in three days in downtown Everett’s Angel of the Winds Arena on Sunday, 4:05 p.m. (Fox Sports 1380 / FM 95.3) against the Victoria Royals. Doors open at 3pm with the first 1,500 fans receiving a commemorative 15th Anniversary Pennant. Tickets are on sale at www.everettsilvertips.com/tickets.