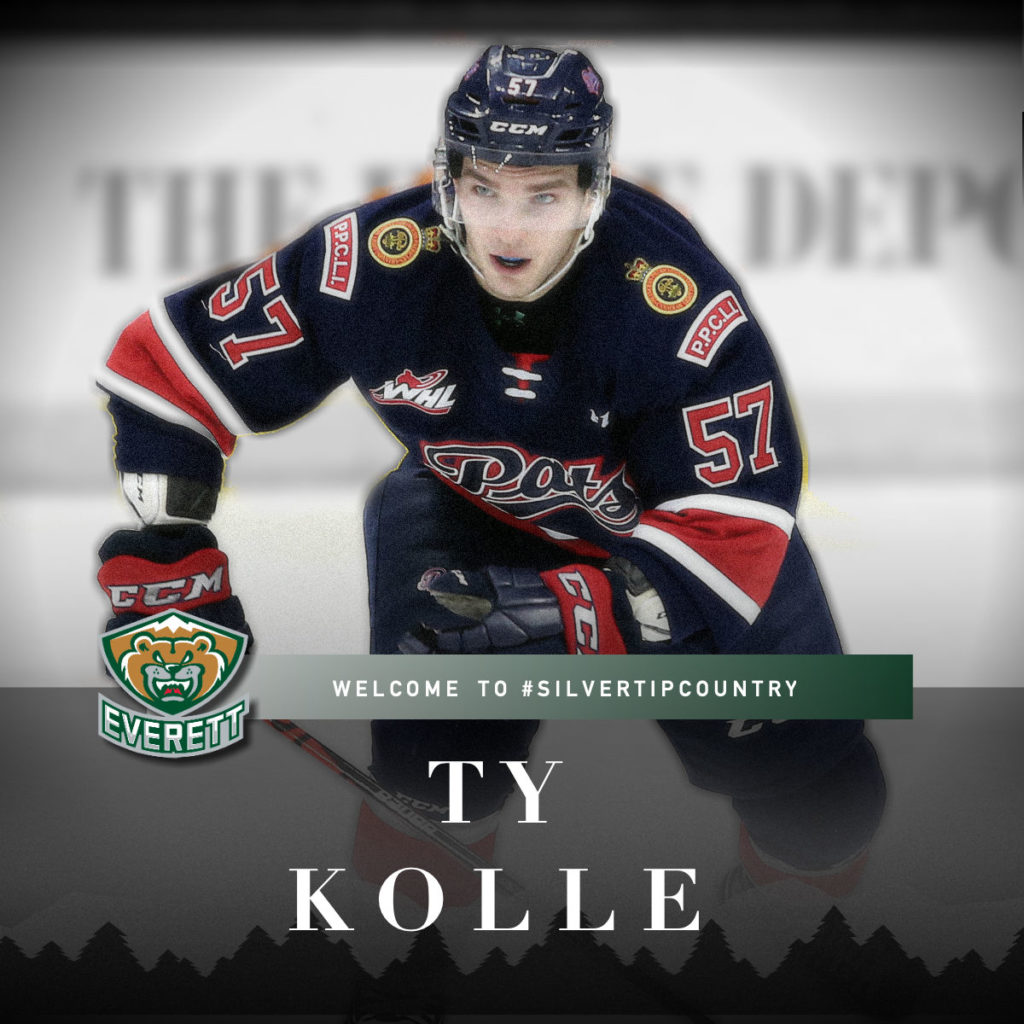 EVERETT, Wash. – The Everett Silvertips, two-time Western Conference champions and seven-time U.S. Division champions of the Western Hockey League, have acquired forward Ty Kolle from the Regina Pats in exchange for a fourth round selection in the 2020 WHL Draft, a fifth round selection in the 2021 WHL Draft and the rights to prospect forward Ean Somoza, Silvertips general manager Garry Davidson announced today.

“Ty is a skilled forward who has a proven ability to finish and brings experience competing in the U.S. Division,” said Davidson. “As a 19 year old forward with an opportunity to play in a significant role with us moving forward, we like how his abilities complement the group we have at the halfway point of the season. We look forward to welcoming Ty to the Silvertips family.”

Kolle, 19, was second on Regina this season in goals (14) and power play goals (5) while logging 23 points (14g-9a) in 35 games, along with a pair of game winning goals and two shootout goals. The native of Kamloops, British Columbia logged a career high 28 points (16g-12a) and 16 goals in 64 games last season between the Pats, Lethbridge Hurricanes and Portland Winterhawks.

Originally selected by the Portland Winterhawks in the fourth round of the 2015 WHL Draft, Kolle has picked up 37 goals and 68 points in 172 career WHL games, along with a pair of assists in seven WHL Playoff games.

This season, he tied a career high mark of three points (2g-1a) against Moose Jaw on Sept. 20 and has 15 multi point games in his career.

TRADE: The @WHLsilvertips have added to their forward depth w/ the acquisition of @tykolle7 from @WHLPats!

Somoza, selected originally in the 13th round of the 2018 WHL Draft by the Silvertips, is currently skating for the Los Angeles Jr. Kings (T1EHL U16) with 29 points in 16 games.

UP NEXT: The Tips face a rematch tonight with the host Prince George Cougars at CN Centre, opening at 7:05 p.m. (KRKO / Tips App / WHL Live) and return home Sunday, Jan. 12 against the Regina Pats at 4:05 p.m. Tickets are on sale for the Jan. 12 home game, the next Siegen Family Fun Zone event. The first several hundred fans in attendance will take away a Tips beanie presented by BECU.