Trio of Silvertips to Skate in NHL Camps 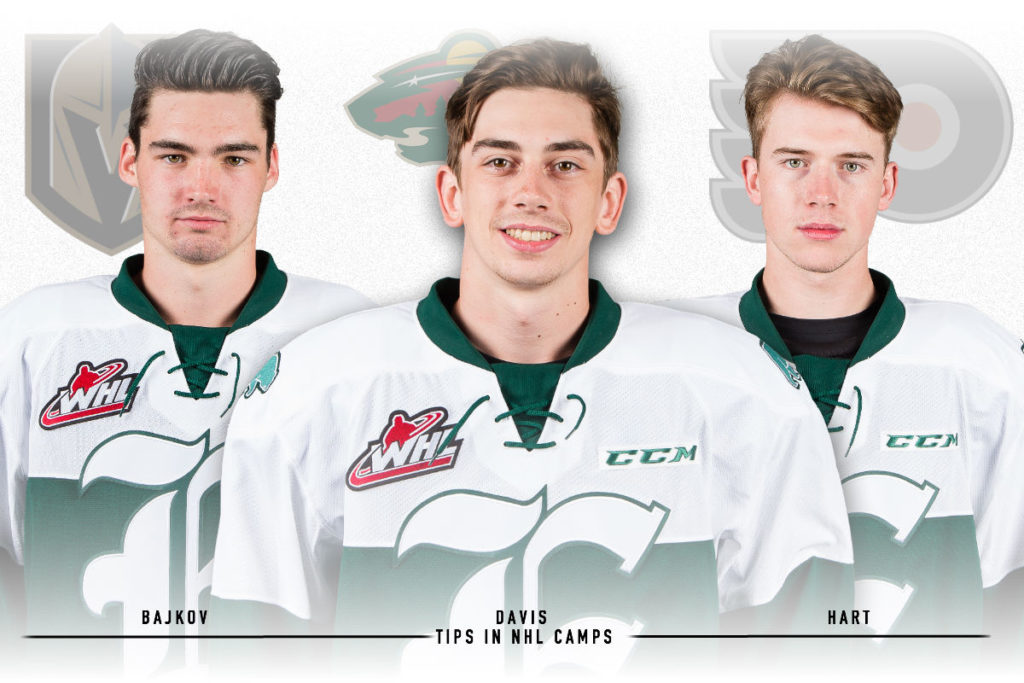 The trio of Silvertips players will skate in camps with the following teams:

Bajkov, entering his overage season, led the Silvertips in 2016-17 in points (78), goals (29), and was second in assists (49) – all career highs – while skating in 71 games. The 6-foot, 185-pound forward was second in playoff scoring for the Tips last season with 11 points in 10 games and has 188 points in 270 career WHL and Tips games. He currently ranks fifth on the Tips all-time points list, is tied for fifth in goals (79) with Carson Stadnyk and Kohl Bauml, and skated with the Golden Knights at development camp in June.

He will skate with the Golden Knights at City National Arena starting Thursday. Vegas will face the Los Angeles Kings in a pair of rookie games, Sept. 12-13 at Toyota Sports Center in El Segundo, Calif.

Davis, entering his overage season, was last season’s runner up for the Brad Hornung Trophy as the WHL’s Most Sportsmanlike Player. The 6-foot, 185-pound defenseman had just 14 penalty minutes while never missing a game last season, additionally ranking third on the Silvertips in scoring and tied for eighth among WHL defensemen with 59 points (9g-50a). His 29 power play assists were tied for the lead and 37 points were second among league defensemen.

The 6-foot, 180 pound defenseman was named recipient last season of the Silvertips Most Improved Player and the Tips Iron Man awards. He has 109 points in 276 career WHL games – all in a Tips sweater – and ranks sixth on the Tips all-time games played list.

Davis, who skated with the Wild in development camp, will participate Sept. 8-12 with the Wild at the NHL Prospect Tournament in Traverse City, Mich. Games will be streamed live on the FOX Sports GO app and www.wild.com.

Hart, 19, reigning back-to-back WHL Goaltender of the Year, comes off a season where he led the league in shutouts (9), goals-against-average (1.99), was tied for the league lead in save percentage (.927) and went 32-11-6-2 in 54 games. The 6-foot-2, 185-pound goaltender is second on the Silvertips all-time shutout list (19), trailing Leland Irving by two and seven away from the league record. He earned the Canadian Hockey League Goaltender of the Year award in 2016 and was named Silvertips Most Valuable Player in back-to-back seasons as well.

Hart was the first goaltender selected in the 2016 NHL Entry Draft, drafted by the Philadelphia Flyers in the second round (48th overall). In 149 games of his Silvertips and WHL career in net, he has a record of 85-40-9-9, goals against average of 2.13, and a save percentage of .921.

Hart and the Flyers open rookie camp on Sept. 11 and will compete in a rookie game on Sept. 13 against the New York Islanders at Wells Fargo Center in Philadelphia.

The Silvertips skate next in the Vancouver Giants pre-season tournament on Saturday and take on the Prince George Cougars at Langley Events Centre at 2:00 p.m.