Grey Over Green, Blue With Steam 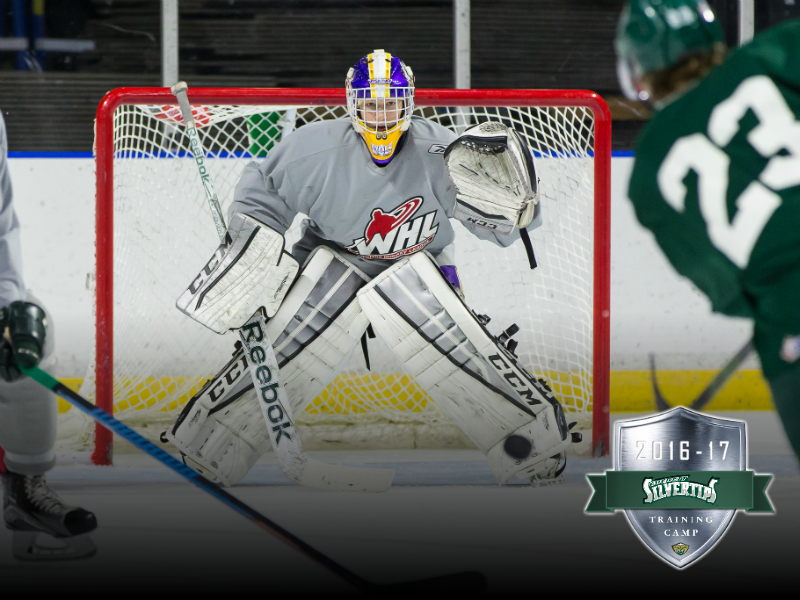 Wolf delivered two key saves for Team Grey in the opening minutes and Browne, walking out along the boards, opened the scoresheet with a backhander from the left goal line that deflected of Mario Petit and put Grey ahead, 1-0 with 15:27 remaining.

The Snohomish County native Wylie answered with a laser from the right circle, a wrister to knot the game, 1-1 just 42 seconds later for Team Green.

Wolf then flashed the blocker to deny Matt Fonteyne’s quick redirection with 9:27 left in the period, preserving the tie.

Richards, acquired in the offseason in a trade from Regina, stripped Team Green’s defense on a low-to-high pass and cashed in with a breakaway goal, slithering a backhand deke past Petit’s glove for a 2-1 lead with 7:18 left.

Hart replaced Wolf and Lasse Peterson (acquired during the summer from Spokane) replaced Petit with 10:06 remaining in the second period, and the score remained intact.

Hart continued to see significant activity in the third period, but helped preserve the lead while Team Grey closed out the game successfully in their own zone, after a face-off to Hart’s left and a six-on-four opportunity for Team Green.

Green’s goaltenders, Petit and Petersen, stopped 18 of 20 shots. Green outshot Grey, 43-20. Doug Sinclair and Tyler Maxwell served as coaches for Team Grey, while Turner Stevenson and Jag Bal were behind the bench for Team Green.

Approaching the finish line of phase one of training camp, Team Blue, led by coaches Rod Egan and Matt Beck behind the bench, carried a 1-0 lead until scoring two goals late to pull away.

Forward Brandon Gremaud (2001-born) opened the scoring for Blue with a wrister from the left circle, off the rush with 16:22 remaining in the first. Following a goaltending switch, Blue maintained their one goal lead late into the second half, despite two close chances at both ends to threaten the score.

Red goaltender Nathan Reay turned away a bid by Cole Nisse between the circles with 11:20 remaining, and Blue netminder Tanner Marshall closed the post on Tips prospect Dylan Holloway’s sharp angled bid from the base of the right circle with 9:33 to go.

With 6:27 left in regulation, Robinson and Curtis Ireland connected with a feed to Michael Horon, stationed at the left circle. Horon’s bid found the back of the net for a 2-0 lead, and Robinson found Malik Kaddoura for an empty netter in the closing seconds to seal the victory.

The Silvertips open the 2016-17 preseason schedule this Friday in the Holiday Inn Preseason Classic, hosting the Seattle Thunderbirds, 7:00 p.m. at XFINITY Arena.