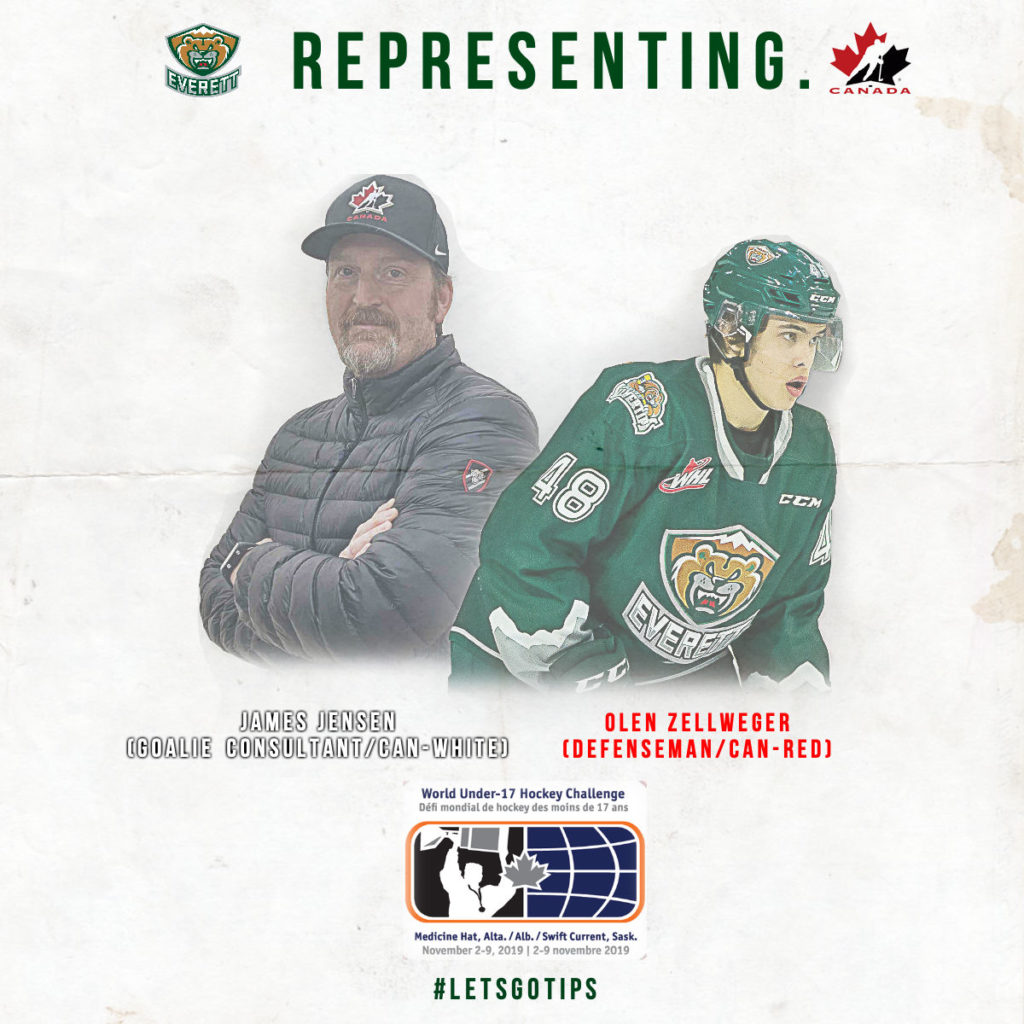 EVERETT, Wash. – As the level of major junior hockey functions as a significant step ladder in budding careers, putting on a home country’s jersey or stepping behind their bench is anything but insignificant.

Two figures will be missing from the Silvertips daily routine starting this week, and for exceptional reason.

Olen Zellweger (Zell-WAY-gher) secured a roster spot on Team Canada for the upcoming World U17 Hockey Challenge; hosting 66 of the top young players in the country, to take place Saturday, November 2nd to Sunday 9th 2019 in Medicine Hat, Alta. and Swift Current, Sask.  Zellweger will skate as a defenseman for Team Red.

“I’m wanting to go in there with an open mind,” said Zellweger. “(I’m) just wanting to win: I want to be focused, be prepared, and work hard. It’s an international event so I’m excited to play against different countries.”

The last time he played in something this big? Zellweger had to think through an extended pause.

“Selects tournaments. That’s about it.”

Zellweger was selected in the second round (42nd overall) of the 2018 WHL Draft from the OHA Edmonton Bantam Prep (CSSBHL).  He was second amongst all defensemen with 27 points (8G, 19A) in 35 games with the program.

He also led the squad’s blueliners with 19 assists and tied for the lead among defensemen with four points (1G, 3A) in five postseason games.  In his first full season with the Tips, the Fort Saskatchewan native has 1 assist and a +/- 7 rating in 11 games.

The defenseman skated in the Alberta Cup (Team Edmonton Blue) earning two points (1G, 1A) in five games in 2017-18.  He represented Alberta again in the 2019 Canada Winter Games in Red Deer, Alberta where he tallied a goal and an assist in 5 games to reach a bronze medal.

“A humble opportunity for me – it wouldn’t be available if I wasn’t coaching in Everett,” Jensen said. “The Tips have always had success with goaltenders. I hope I continued that expectation.”

Jensen is proud to be at a point in his career to represent his home country in the tournament.

“The goal is for any of the three Canadian teams to medal,” said Jensen. “It is my expectation to give my goaltenders as much information as possible to set them up for success and for me to be a safety net if necessary.”

Jensen wants to work as a friend and mentor during this process: he will be leading goaltenders Tyler Brennen of the Prince George Cougars (WHL) and William Rousseau from the Trois-Rivières Estacades (QMAAA).

The Silvertips were represented in the series last year by defenseman Ronan Seeley and coach Dennis Williams.

The semifinal in Medicine Hat will take place on Friday, November 8th and will be broadcast by TSN and RDS, official broadcast partners of Hockey Canada.  The Bronze and Gold medal games will occur on Saturday, November 9th.