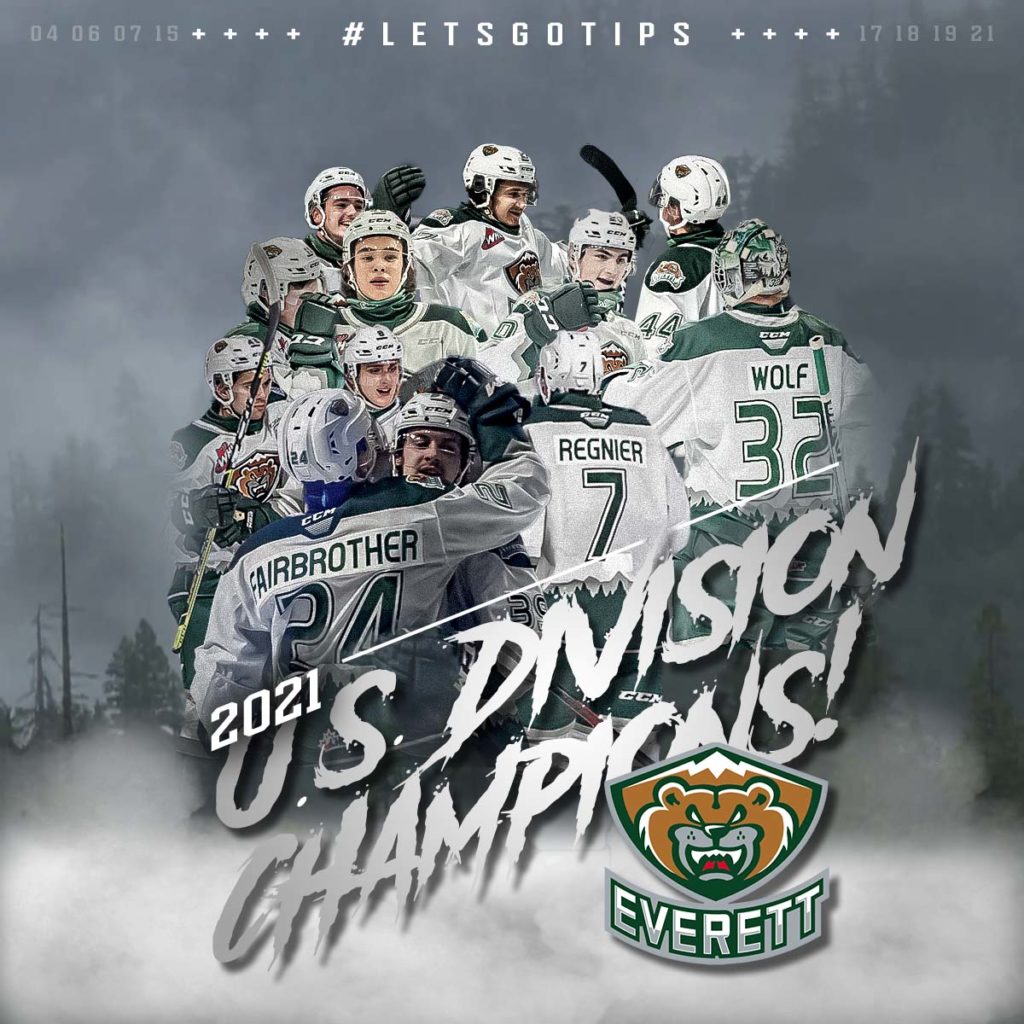 EVERETT, Wash. – The Everett Silvertips have clinched the U.S. Division title of the Western Hockey League, their eighth overall in 18 seasons, competing through the 23-game WHL schedule with a current record of 15-4 (30 points) and a .789 points percentage.

With the Silvertips idle on Saturday, they clinched the division title after the Tri-City Americans defeated the second place Portland Winterhawks, 3-2 at Veterans Memorial Coliseum. The Silvertips have gone 7-3-0-0 in the last ten games, facing a schedule this season against opponents exclusively from the U.S. Division after return-to-play guidelines allowed the Silvertips and the division to open a pandemic-shortened season on Oct. 20. To conclude the season, primary criteria for the U.S. Division title was awarded by highest points percentage.

Silvertips general manager Garry Davidson, overseeing the franchise’s fifth division title since his arrival, is joined by fourth year head coach Dennis Williams as recipient of multiple titles, who earns his third in four years. Assistant coach Louis Mass has his second title in his third season behind the Silvertips bench, since joining in 2018-19.

Co-captain Gianni Fairbrother, a drafted and signed prospect of the Montreal Canadiens, is tied for 14th in league scoring among WHL defensemen with 15 points (1g-14a) in 19 games while co-captain Cole Fonstad, a 2000-born forward currently a National Hockey League free agent, is tied for tenth in league points (29) and eighth in goals (13) in 19 games.

A division title with the same feeling.

It's a great day to be a Silvertip.

Silvertips goaltender Dustin Wolf, a drafted and signed prospect of the Calgary Flames, is second in league wins (14), third in goals-against-average (1.88), tied for the lead in shutouts (4), and the league leader in save percentage (.939) with a 14-3 record in 18 games. On special teams, the Silvertips rank seventh in the league at 26.2 percent, and lead the league on the penalty kill at 91.2 percent (52-of-57).

Not easy. And everyone bought in. #LetsGoTips

The Silvertips own a record of 8-1 at home, and 7-3 on the road, and have four games left in the regular season, concluding their home schedule on Friday, May 7 against Spokane and wrapping up the season the next night on the road against the Seattle Thunderbirds.

UP NEXT: The Tips visit Spokane on Sunday, 5:10 p.m. (KRKO/WHL Live) for their next game, their final visit of the season to Spokane Arena. Viewing packages remain on sale at watch.chl.ca. Play-by-play “Voice of the Tips” Mike Benton will have pre-game coverage beginning 30 minutes before puck drop.