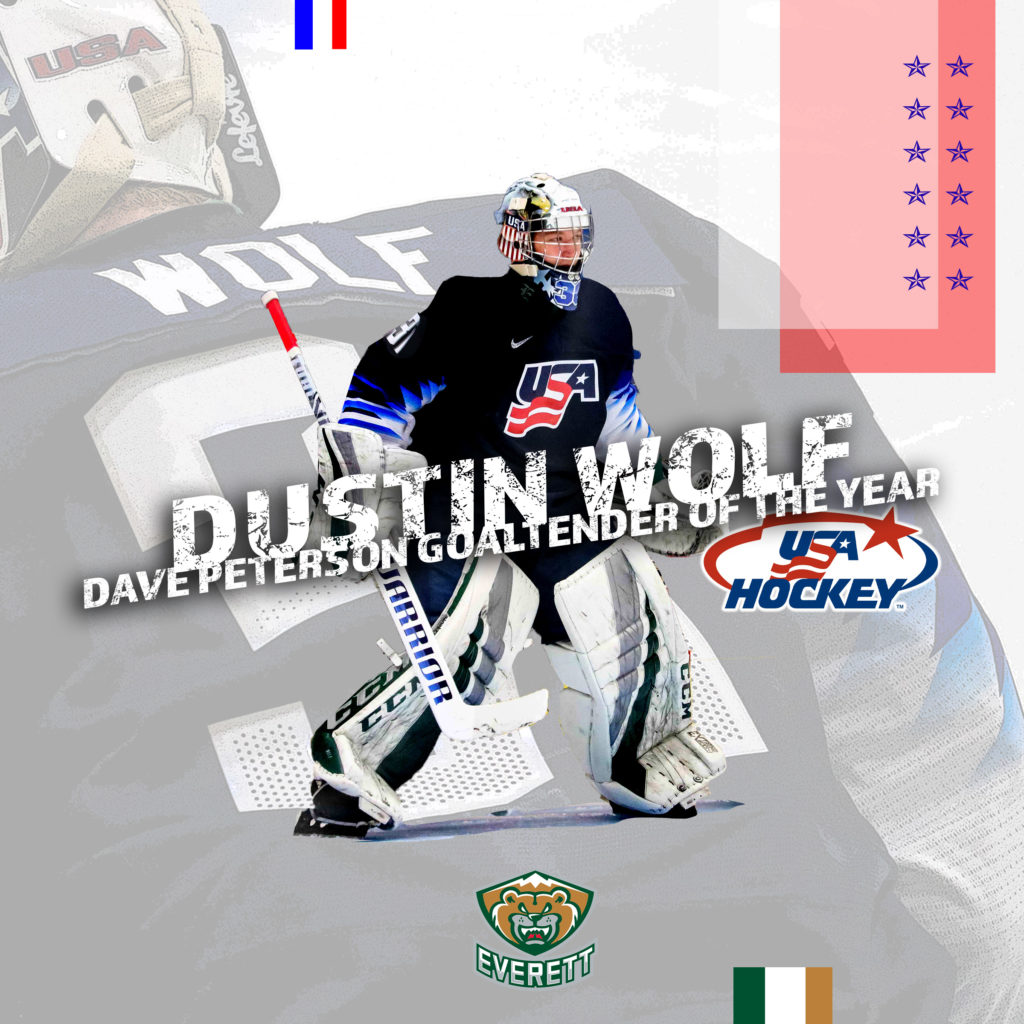 EVERETT, WA – The Everett Silvertips, proud seven time U.S. Division champion and two time Western Conference champion of the Western Hockey League, announced today in conjunction with USA Hockey that goaltender Dustin Wolf has been named by USA Hockey as recipient of the Dave Peterson Goaltender of the Year award, presented annually to the top junior level goaltender in the United States. Wolf is the first goaltender originally from California to receive the award in USA Hockey history.

The recipient of the Dave Peterson Goaltender of the Year Award is chosen from the pool of American-born goaltenders who play at the junior level each year. The award, presented by Bauer Hockey, is named in honor of the late Dave Peterson, a passionate leader in goaltender development who twice coached the U.S. Olympic Men’s Ice Hockey Team.

“As the payoff for a remarkable season fueled by work ethic continues to grow, Dustin Wolf is very deserving of the Dave Peterson Goaltender of the Year award,” said Silvertips general manager Garry Davidson. “As recognition for the top USA Hockey goaltender among the junior levels this season, one of Dustin’s goals established before the 2019-20 season was to make an impact large enough to represent his country at the World Junior Championships, never an easy task. His mission was communicated from the outset, and his numbers backed up his determination all season long. We as a Silvertip family are extremely proud of him.”

“There are many people I owe a world of gratitude for this honor to receive the Dave Peterson Goaltender of the Year award,” said Wolf. “Being the first goaltender from California to receive this award makes it even more special as my parents, Mike and Michelle, supported me every step of the way during our time in Gilroy and Tustin. I thank my teammates, Silvertips coaches Dennis Williams, Louis Mass, Mike Lysyj, and James Jensen, and performance coach Walter Aguilar for helping create a structure for success. The Calgary Flames, including goaltending coaches Jordan Sigalet and Thomas Speer provided endless support all season. Finally, my thank you to the entire staff of USA Hockey for believing in my abilities and providing an opportunity to wear red, white, and blue at World Junior Championships. It’s a huge honor to represent your country and drives me every day to do my best.”

Wolf was named WHL Goaltender of the Year as recipient of the Del Wilson Memorial Trophy for the 2019-20 season, the first time as award recipient for his career and the fourth Silvertip goaltender in the last five years. He represented USA Hockey at the 2020 IIHF World Junior Championships, earning a victory in his sole appearance and represented the U.S. on the international stage in 2018, finishing 2-1-0-0 with one shutout in the Hlinka Gretzky Cup.

Wolf, 19, led or tied for the lead for the WHL in four goaltending categories: wins, shutouts, save percentage, and goals-against-average while, was named Silvertips co-Most Valuable Player and twice was named WHL Vaughn Goaltender of the Month this season. With Wolf in net, the Silvertips reached the top of the WHL’s U.S. Division and Western Conference with a 44-12-3-1 record through 60 games, good for 92 points and finishing the season with victories in 13 of their final 14 games, a 46-13-3-1 record, 96 points – second most in the U.S. Division and entire league.

He is the WHL nominee for the Canadian Hockey League Goaltender of the Year award for the 2019-20 season.