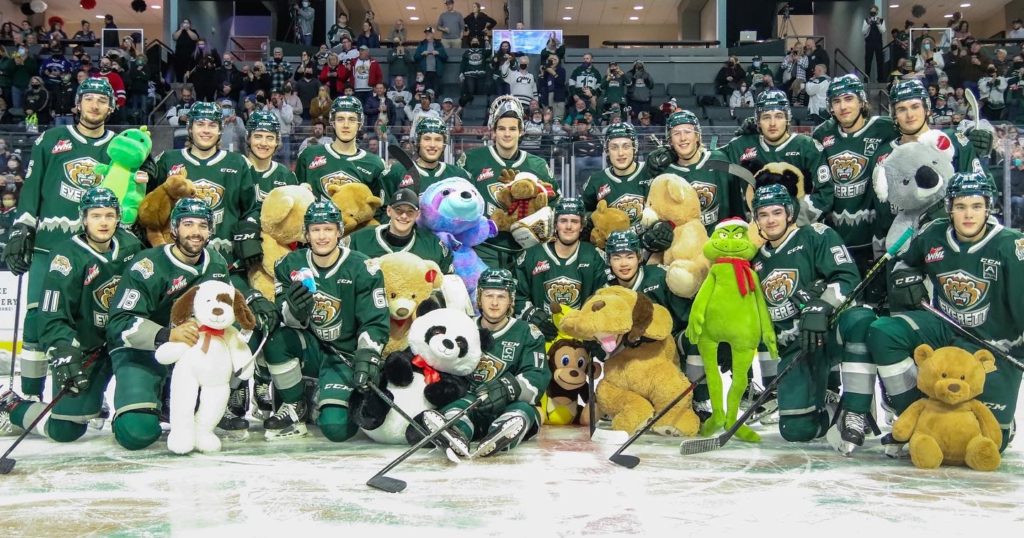 EVERETT, Wash. — It only took one minute and fifty-four seconds.

Matthew Ng made quick work of the Everett Silvertips’ Teddy Bear Toss, netting his fifth goal of the season against the Vancouver Giants and ushering in a cascade of stuffed animals raining down onto the Angel of the Winds Arena ice.

Ng’s goal is the first Teddy Bear Toss goal scored by the Silvertips since Dec. 14, 2019 when Bryce Kindopp scored at 1:52 in the first period. Everett native Hunter Campbell and Michal Gut assisted on Ng’s tally. The Silvertips welcomed 5,983 fans into the arena for the promotional night. A grand total of 11,096 stuffed animals were collected, donated to Christmas House for under-privileged families and, with the help of dwell Mortgage, to Everett Fire Department and Volunteers of America. The number of animals donated sets a franchise record, previously set in 2019 at 10,236.

In addition, the Silvertips raised $1,575 for the Ace Foundation, benefitting local hospitals including Seattle Children’s.

The Everett Silvertips would like to thank their friends at dwell Mortgage and Ace Hardware – Lake Stevens, Evergreen Way & Stanwood for their assistance and support of Teddy Bear Toss Night.

Despite the festivities, the Silvertips fell 6-5 in regulation to the Vancouver Giants on Saturday night. A pair of third-period goals by Zack Ostapchuk led the Giants to a comeback victory. Jackson Berezowski finished with a pair of goals in the loss. The Silvertips also lost to the Portland Winterhawks on Sunday, their first regulation loss to a U.S. Division opponent in 19 games this campaign.

Everett is now 18-3-2 on the season, sitting atop the Western Conference with 38 points.

Silvertip Country, you came through in a BIG way. By our count, we collected 11,096 stuffed animals for Christmas House, EFD and Volunteers of America on Teddy Bear Toss Night.