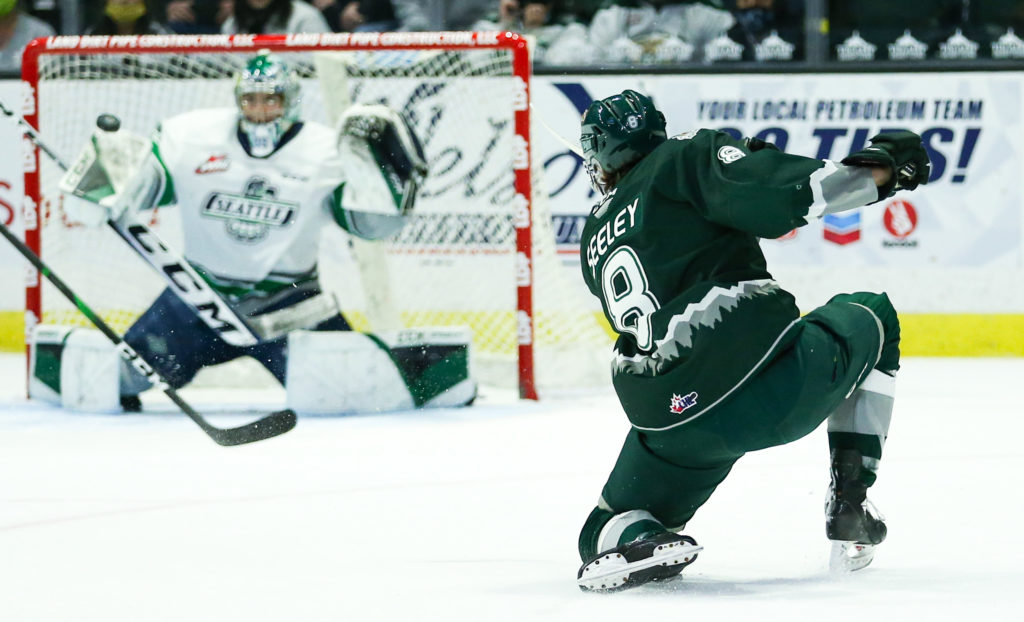 EVERETT, Wash. — The Everett Silvertips point streak has reached 12 games with a pair of home wins Friday and Saturday night. A 6-0 trouncing of the Tri-City Americans and a 3-2 victory over the Seattle Thunderbirds have rocketed the Tips to sole possession of first place in the U.S. Division with an 11-0-1 record.

Niko Huuhtanen opened the scoring Friday night against Tri-City, potting the first of his WHL career with a slick backhander. Minutes later in the first period, Huuhtanen set up Ben Hemmerling in the high slot for a wrist shot, putting the Silvertips up 2-0.

Jackson Berezowski netted his seventh of the season in the second period, fielding a backhand pass from Alex Swetlikoff at the near post for a point-blank one-timer. Swetlikoff potted a goal of his own later in the second period, set up by Michal Gut at the left circle. Ronan Seeley would tack on a powerplay goal before period’s end to put the Silvertips up 5-0 after two.

Everett’s terrific shot suppression would carry over into the first period of Saturday’s rivalry match against the Seattle Thunderbirds, as the Tips outshot the T-Birds 12-3 in a scoreless opening frame. In a more tightly contested second period, a terrific show of skating from Ronan Seeley cutting from the blueline to the net generated a scoring chance in front, capitalized on by Ryan Hofer.

Austin Roest would give the Silvertips a 2-0 lead, lifting a wrist shot past Seattle netminder Thomas Milic. Just over two minutes later, Alex Swetlikoff and Jacob Wright tag-teamed Seattle’s Matt Rempe on the forecheck, generating a turnover and dishing to a wide open Berezowski in front for a 3-0 lead.

Seattle would rally back in the third period, netting an early goal courtesy of Henrik Rybinski. Jared Davidson would contribute a powerplay goal with 5:57 remaining in regulation to bring the game to within one. Everett goaltender Braden Holt and the Tips’ defense would hold firm in the waning moments, however, securing a nail-biting 3-2 win.

Holt saved 24 on 26 shots in his fifth win of the season. Michal Gut finished the weekend with four assists. Ronan Seeley collected three points in the two games, while also skating in his 150th career WHL game on Saturday.