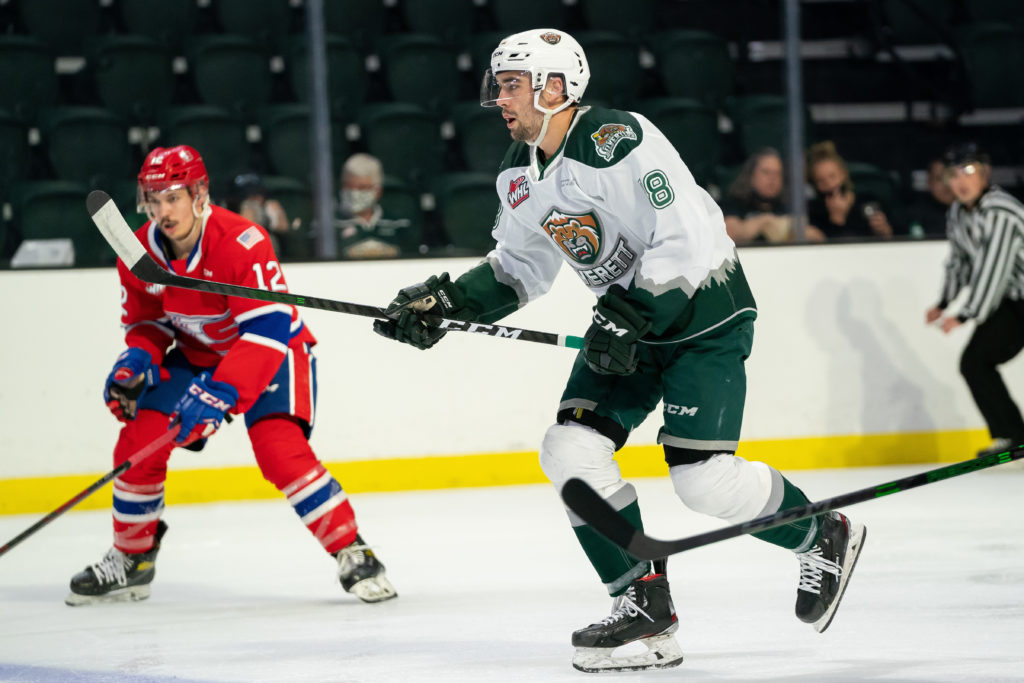 SPOKANE, Wash. — The Everett Silvertips set another franchise record this past weekend, sweeping the Spokane Chiefs in a pair of one-goal games and improving to 9-0-1 on the year.

The 10-game point streak is the longest run without a regulation loss to start a season since the 2014-15 Silvertips began their campaign 6-0-3.

Spokane tallied the first goal of Friday’s game six minutes into the opening period, but Jackson Berezowski would bring the game back to even with a penalty shot goal.

Everett erupted in the second period, netting four unanswered goals in the frame. Hunter Campbell opened the onslaught, fielding a Matthew Ng pass in the slot and wiring a wrist shot past Spokane goaltender Mason Beaupit. Just 90 seconds later, Jonny Lambos scored his second of the season with a shot through traffic to put the Silvertips up 3-1. Ng would then pot his first of the season a mere 25 seconds after Lambos’ goal for a 4-1 lead. Before period’s end, Alex Swetlikoff would bury his sixth of the season to put Everett up by four heading into the second intermission.

As the Chiefs subbed out Beaupit for backup netminder Manny Panghli, they regrouped and began chipping away at the deficit. Jack Finley tallied a shorthanded goal. Later in the period, Blake Swetlikoff notched a powerplay goal. Finley would cap off his first WHL hat trick with just less than five minutes remaining in regulation, slashing the lead down to one goal.

The Tips would fend off the last-minute fervor, sealing a 5-4 win. Koen MacInnes finished with 20 saves on 24 shots for his fifth win of the season. Matthew Ng collected his first multi-point performance of his WHL career.

Highlights from Game 1 of the weekend, a 5-4 win over Spokane! #LetsGoTips pic.twitter.com/VvcdvvUsfq

Saturday’s contest saw a much lower scoring output. Once more Spokane would jump out to a first-period lead, with Yannick Proske receiving a cross-ice pass from Copeland Fricker and lifting it past Everett goaltender Braden Holt.

A scoreless second period sent the Silvertips into the locker room trailing after two periods for the first time all season. They responded in a hurry, as Olen Zellweger muscled a slapshot from the blueline past Beaupit for a game-tying powerplay goal.

Though the Silvertips outshot the Chiefs 14-0 in the third period, the game would remain deadlocked at one forcing overtime. Hunter Campbell capped off a fantastic weekend by firing the game-winner from above the hashmarks, finishing off a 2-1 comeback victory.

Campbell, an Everett native, finished with two goals and two assists on the weekend. Braden Holt turned aside 12 of 13 shots for his fourth win.