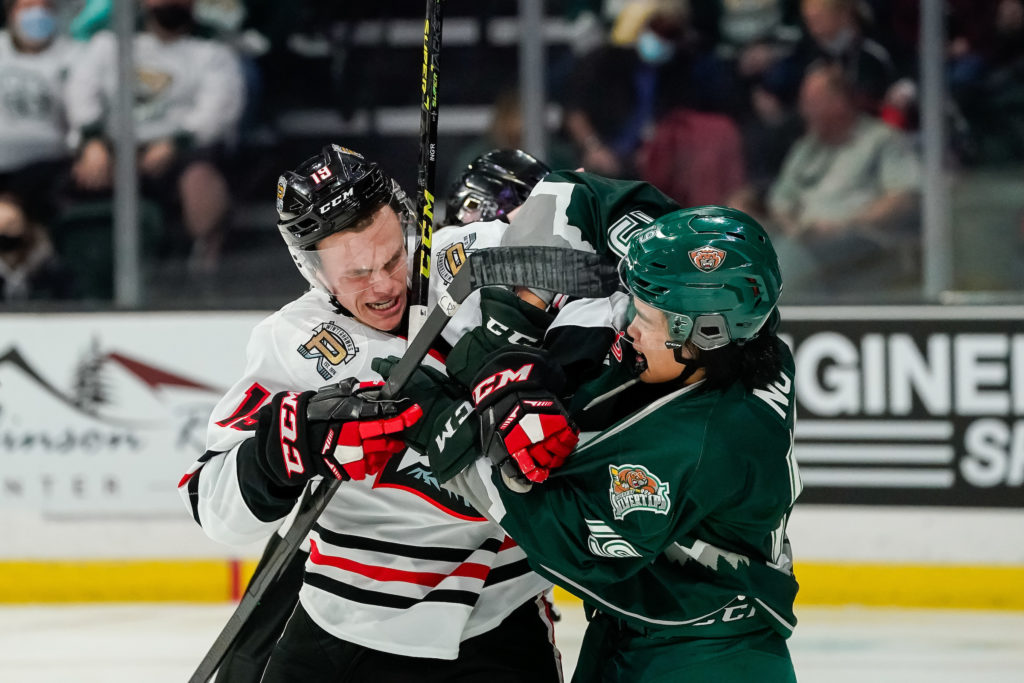 EVERETT, Wash. — The Everett Silvertips rebounded after a tough shootout loss with a commanding victory Saturday night to earn three of a possible four points on the weekend.

After falling 4-3 in the shootout on home ice to the Portland Winterhawks, the Tips routed the Spokane Chiefs 4-1 in Spokane to improve to 7-0-1 on the year. They now have 15 points in the standings, tied with the Seattle Thunderbirds with two games in hand.

Everett erupted out of the gate Friday night, netting three goals in the first period and outshooting the Winterhawks 15-1 in the process. Ronan Seeley and Dylan Anderson each contributed a powerplay goal in the opening frame. Penalty trouble would come back to haunt the Silvertips, as the Hawks chipped away with two powerplay goals of their own and finally evened the score in the final two minutes of regulation with the net empty.

The Silvertips outshot Portland 7-0 in overtime, hitting three posts in the process, yet still couldn’t find the game-winner. Hawks forward Cross Hanas scored the only goal of the three-round shootout, securing a 4-3 comeback victory for Portland.

Everett’s defense clamped down on Spokane Saturday night, earning an early lead and not looking back. Ryan Hofer stuffed in his second goal of the season 3:44 into the first, with Austin Roest and Michal Gut finding the back of the net in the second. Gut capped off the evening with his second of the night in the final frame, insuring a 4-1 victory at Spokane Arena.

Koen MacInnes stopped 13 of 14 shots on goal in his team-leading fourth win of the season.

Gut led the weekend with three points over the two games. Hunter Campbell registered a goal and an assist, while Jackson Berezowski collected a pair of assists.