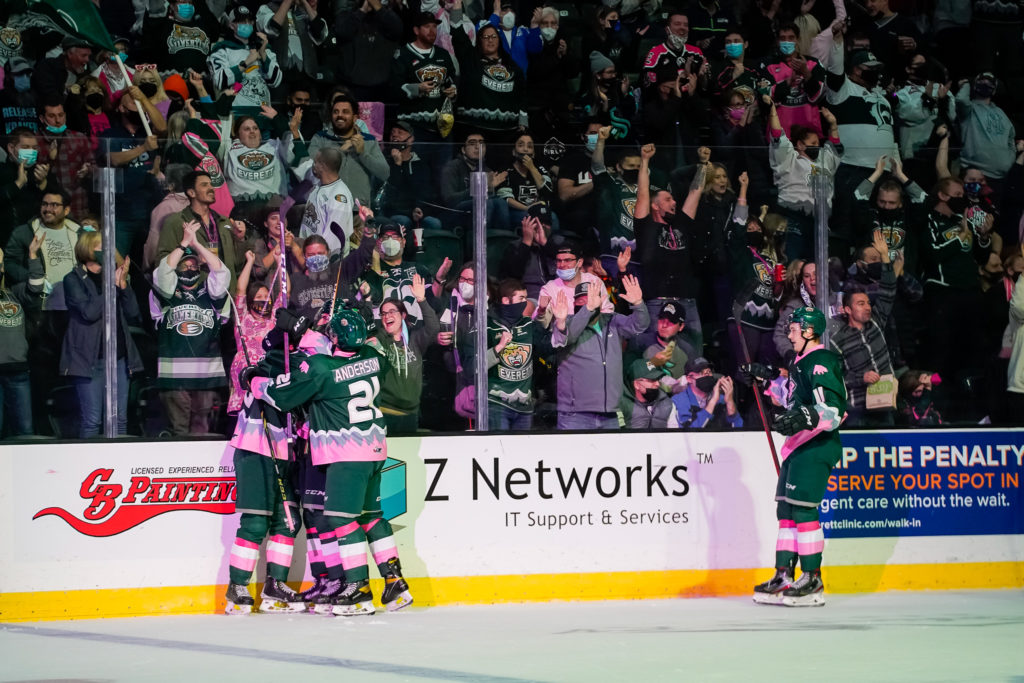 EVERETT, Wash.– It took months for the Battle for Seattle to return to the ice after a lengthy offseason.

The wait was well worth it.

The Everett Silvertips earned four points in a fierce home-and-home weekend against the Seattle Thunderbirds. Ben Hemmerling’s four-point night ended with a flourish Friday night, as the 17-year-old capped off a breakout performance with an overtime winner at Accesso ShoWare Center in Kent. Jackson Berezowski potted a pair and Koen MacInnes locked things down in net the following evening to earn a 3-0 shutout in front of 6,397 fans on Pink the Rink Night at Angel of the Winds Arena in downtown Everett.

Seattle jumped out of the gate with fervor Friday night, grabbing an early lead thanks to a Jordan Gustafson goal midway through the first period. The Silvertips knotted the score late in the frame, as a rolling puck popped out to an empty netfront with Seattle goaltender Thomas Milic anticipating the play behind the end line. Hemmerling capitalized on the vacated crease for his first of the season.

Just 1:51 later, Jackson Berezowski would find Hunter Campbell on a 2-on-1 rush, shouldering off a Thunderbirds defender to give the Tips a 2-1 lead.

The Thunderbirds answered back in the second with goals from Conner Roulette and Reid Schaefer, Schaefer’s coming shorthanded. Late in the second period, Seattle’s Lucas Ciona barreled into Tips goaltender Braden Holt, earning him a game misconduct and subsequent two-game suspension. Austin Roest wired a long wrist shot past Milic on the ensuing major powerplay to once more even the score headed into the third period.

Leon Okonkwo Prada netted a go-ahead goal for the Thunderbirds early in the final frame, but late-period heroics would once more save the day for Everett as a Ben Hemmerling takeaway set up an Alex Swetlikoff equalizer with 5:50 remaining in regulation.

At 2:11 in overtime, Olen Zellweger’s low shot landed perfectly on Hemmerling’s stick, earning the Silvertips a 5-4 win. Hemmerling finished with two goals and two assists, while Braden Holt stopped 26 of 30 shots in the win. Seattle and Everett combined for 64 shots on goal and 39 penalty minutes in the contest.

The Silvertips took home ice Saturday night donning special green-and-pink jerseys for breast cancer awareness. Though the Thunderbirds would pepper Tips netminder Koen MacInnes with eight shots on goal in the opening 10 minutes, the Silvertips would regain their footing and seize the lead 17:35 into the first courtesy of Jackson Berezowski.

Berezowski provided all the cushioning the Tips would need in the second period, pounding in a close-range powerplay goal. With Zellweger tacking on a backhand goal in the third, MacInnes would carry the Tips the rest of the way, turning aside all 31 shots for his fourth career WHL shutout.

“It feels pretty awesome,” MacInnes said of his first clean sheet of the season. “There’s really not many other words you can describe it with. It’s exciting…I’m just happy we got the win.”

The Silvertips have not yet surrendered a goal on home ice this season, with Braden Holt stopping 23 shots in the home opener against the Portland Winterhawks on Oct. 8.

Ticket revenue and proceeds from the game-worn jersey auction raised over $65,000 for Providence Comprehensive Breast Center in Everett. The Silvertips have raised more than $780,000 for the fight against breast cancer in the last 11 seasons of Pink the Rink.

“It’s always a fun night,” commented Silvertips head coach Dennis Williams. “It’s a great opportunity for us to give back to the community and to a great cause…If there’s something we can do as an organization to continue to help out in our local area, it’s definitely something we’re very proud of.”

The Everett Silvertips would like to thank Safeway, ProvidenceNW and Albertsons for their support of Pink the Rink Night.

A rivalry series wouldn’t be complete without some fisticuffs, which transpired after the final horn sounded Saturday night. Between Ciona’s suspension, the five lead changes on Friday and the post-game skirmish on Saturday, the stage has been set for a ferocious season series between the two U.S. Division foes.

The Silvertips hit the road this weekend for a set of games with the Portland Winterhawks. Puck drop is scheduled for 7:00 p.m. PDT on Friday and 6:00 p.m. PDT on Saturday. Everett returns home Friday, Oct. 29 for a special Hockey Happy Hour event. Tickets are available by clicking here.