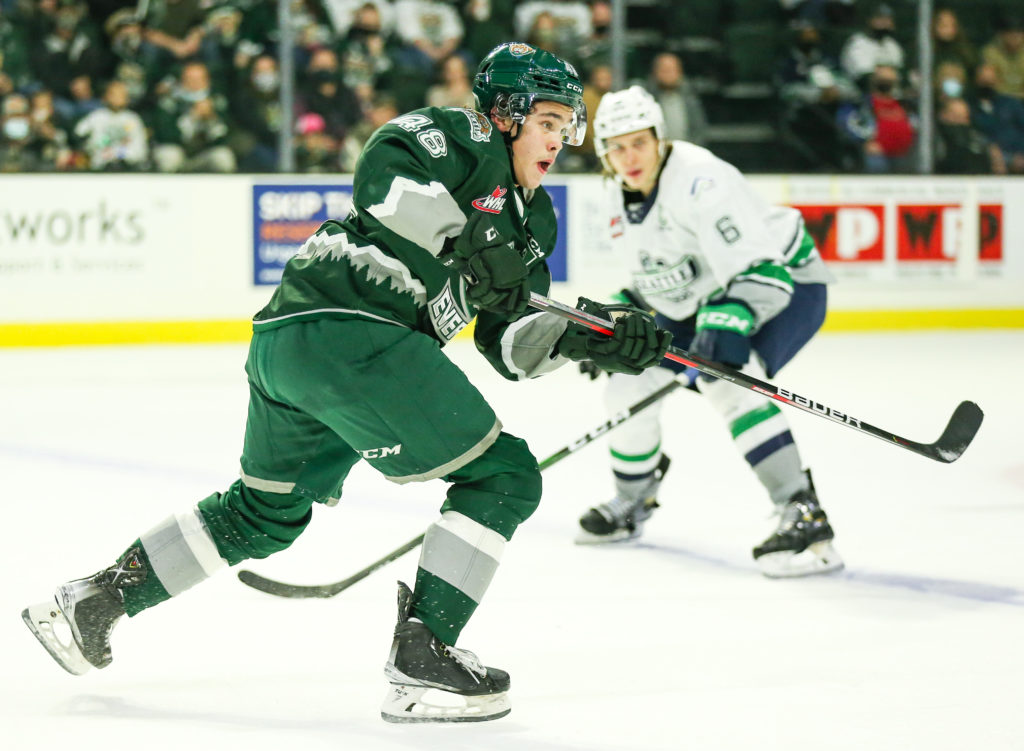 EVERETT, Wash. — The Everett Silvertips’ historic point streak has tied a franchise record after a three-game sweep over the weekend.

By dispatching the Vancouver Giants, Spokane Chiefs and Seattle Thunderbirds in rapid succession, the first-place Silvertips are now 15-0-1 with a chance to break the team record Wednesday night on home ice against the Tri-City Americans.

Co-captain Ronan Seeley led the way with a goal, four assists and a +5 rating on the weekend, while fellow blueliner Olen Zellweger netted a goal in all three games with an assist and a +5 rating to boot.

Friday was a return to Canada for the first time in 630 for the Everett Silvertips as they downed the Vancouver Giants 4-1 at Langley Events Centre. In front of Canadian friends and family, many of whom had not seen the Tips play in nearly two years, the Silvertips got five points from their British Columbian players.

Aidan Sutter opened the scoring midway through the first period with a rising wrist shot from the blueline. Matthew Ng would add to the lead in the second, fielding a pass in front of the net from rookie Roan Woodward for Woodward’s first WHL point.

Let’s take a look back with @CaseyBryant51 and KRKO.

Though Vancouver would strike in the second with an Adam Hall goal, a Zellweger slapshot late in the third period would put the game out of reach. Assisting on the insurance goal was Langley’s own Dylan Anderson. Austin Roest would add an empty-netter with one second remaining on the clock.

Burnaby, BC native Koen MacInnes stopped 18 of 19 in the win.

Everett returned to the friendly confines of Angel of the Winds Arena Saturday night in front of 4,577 fans to take on the Spokane Chiefs. A Jonny Lambos shot from the blueline 6:55 into the first period ricocheted off the end-boards onto the stick of Jacob Wright, who tucked the loose puck into the net on a wraparound for an early 1-0 Everett lead. Later in the first, an Olen Zellweger one-timer blistered its way past Chiefs netminder Mason Beaupit for a powerplay goal. Jackson Berezowski would contribute a powerplay goal of his own just two minutes later to give the Silvertips a 3-0 lead after one.

The O in @OlenZellweger stands for offense with the goals he’s scoring 🔥#LetsGoTips X @engineeredptpic.twitter.com/bCA3giUJ3D

Midway through the second period, Austin Roest generated a turnover behind the Chiefs’ net as Beaupit mishandled a loose puck in the trapezoid. With the net vacated, Roest set up a streaking Michal Gut for the game’s fourth goal.

Braden Holt would cruise to a 22-save 4-1 win, his seventh of the season. Ronan Seeley collected three assists in the game, with Gut finishing with a goal and two assists.

Both teams playing a three-in-three set the stage for a contentious, exhausting Sunday night game between the Silvertips and Seattle Thunderbirds. Olen Zellweger extended his goal-scoring streak to three games with a wrist shot through traffic five minutes into play to give the Tips the lead. Ronan Seeley potted a powerplay goal, his fifth tally of the season, for a 2-0 lead.

Seattle would answer in the first period, as defenseman Jeremy Hanzel tapped in a bouncing puck in the crease. The T-Birds goal would mark the first time the Silvertips have been scored on in the first period of a home game this season, snapping a six-game streak.

In the opening 30 seconds of the second period with play at four-on-four, Jackson Berezowski fielded a two-line pass in stride, took a low shot on goal that generated a rebound which he promptly buried on a second attempt for his team-leading 10th goal of the season.

Animosity boiled over late in the second period, as Thunderbirds forward Matt Rempe boarded Everett’s Matthew Ng, setting off a full-on skirmish in which Zellweger and Leon Okonkwo Prada dropped the gloves. Rempe was hit with a five-minute major penalty and a game misconduct.

Seattle’s Conner Roulette would sneak a powerplay goal past Koen MacInnes to cut the game to 3-2 at 8:08 in the third period. With the Thunderbirds applying pressure in a physical third period, Alex Swetlikoff would finally provide some breathing room with an empty-net goal with 52 seconds remaining. Austin Roest would contribute another empty-netter for a 5-2 win.

There are few better things in this world better than beating the Seattle Thunderbirds, especially at home.

Let's admire it one more time, shall we?

Koen MacInnes saved 31 of 33 on the evening to improve to 8-0-0 on the year. With a goal, assist and fight, Olen Zellweger earned the team’s first Gordie Howe Hat Trick of the season.

Ronan Seeley was awarded WHL Player of the Week for his outstanding play.