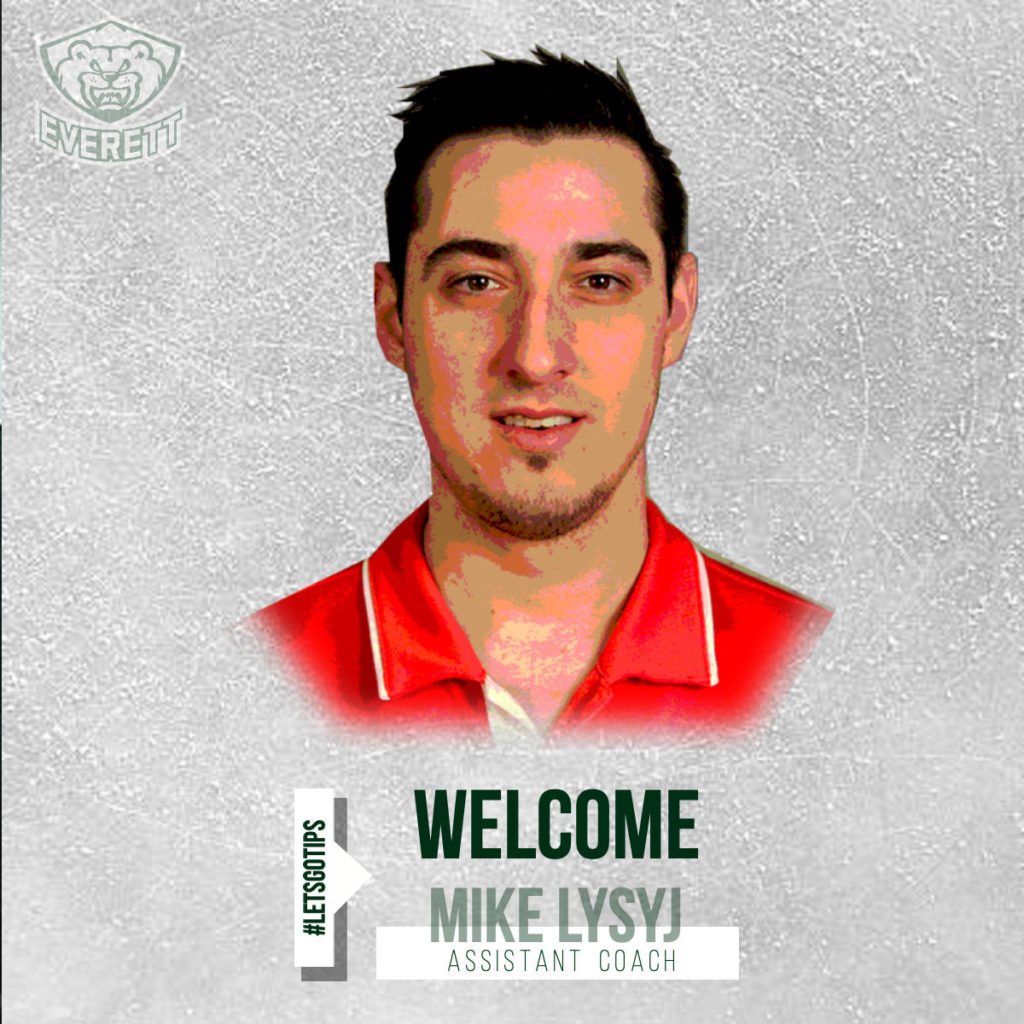 Lysyj, 30 (11/30/1988), spent last season on the bench as assistant coach for Rensselaer Polytechnic Institute (NCAA), serving with skill development on and off the ice under head coach Dave Smith, and assistant coaches Dan Jewell and Chuck Weber. The native of Hillsborough, N.J. helped guide the program to a victory over No. 9-ranked Cornell. The Engineers last season elevated goaltender Owen Savory to a spot on the ECAC All-Rookie Team as a Finalist for Rookie of the Year, while Hobey Baker nominee Jacob Hayhurst (23 points), Pittsburgh Penguins prospect Will Reilly (18 points), and Ottawa Senators prospect Todd Burgess (16 points) each secured offensive career highs.

“Mike is an individual with outstanding qualities and for that we’re excited to welcome him to the Silvertips family,” said Davidson. “We’re adding a young, dynamic, and promising figure who carries excellent abilities to develop our players and support in reaching our goals as a program. During our coaching search he came highly recommended, and we’re confident his personality will be a tremendous fit.”

“It’s a tremendous honor to be joining The Everett Silvertips organization,” said Lysyj. “To be a part of one of the finest development leagues in hockey is really exciting. Developing hockey players and helping them reach lifelong dreams is why I began coaching, and the WHL is the best platform for that. I’m grateful for the opportunity to work with such an accomplished staff and I look forward to contributing to the organization on the ice and in the community.”

“We’re thrilled to welcome Mike to our coaching staff and pursue avenues that will elevate our group with his skill set,” said Williams. “He brings character that fits our core values and a valuable handle on skill development that operates as a key supplement to the growth of our players. His experience as a player and coach deliver instant credibility, making him an exciting addition to our staff.”

Previously, Lysyj spent four years as assistant coach at SUNY Fredonia (NCAA), where he responsible for recruiting and scouting across the United States and Canada, and assisted with film breakdown, on-ice skill development, and hockey operations administration. In 2017-18, he helped guide the Blue Devils to a 9-3-3 mark on home ice and an appearance in the SUNYAC title game for the first time in seven years, upsetting national powers Plattsburgh State and Oswego in the conference tournament.

Carrying additional experience as an instructor with USA Hockey’s New England District, a USA Hockey Festival Evaluator (Atlantic & Southeast District), and with Pro Ambitions Inc. in Dedham, Mass., the former forward made his pro debut with an assist in six games with the Orlando Solar Bears (ECHL) in 2012-13 and recorded 29 games split between Peoria and Mississippi (SPHL) in 2013-14. Lysyj spent all four seasons of his collegiate career with SUNY Cortland, registering 77 points (39g-38a) in 96 games and led the Red Dragons with 33 points (18g-15a) in 25 games as a 2012-13 senior.

At SUNY Cortland, Lysyj graduated with his B.A. degree in Kinesiology (coaching concentration) in 2013 and earned his M.S. degree in Sports Management & Exercise Science in 2017. He will reside in North Everett during the season.