Welcome Back Fans: Opening Night in Downtown Everett is Oct. 8 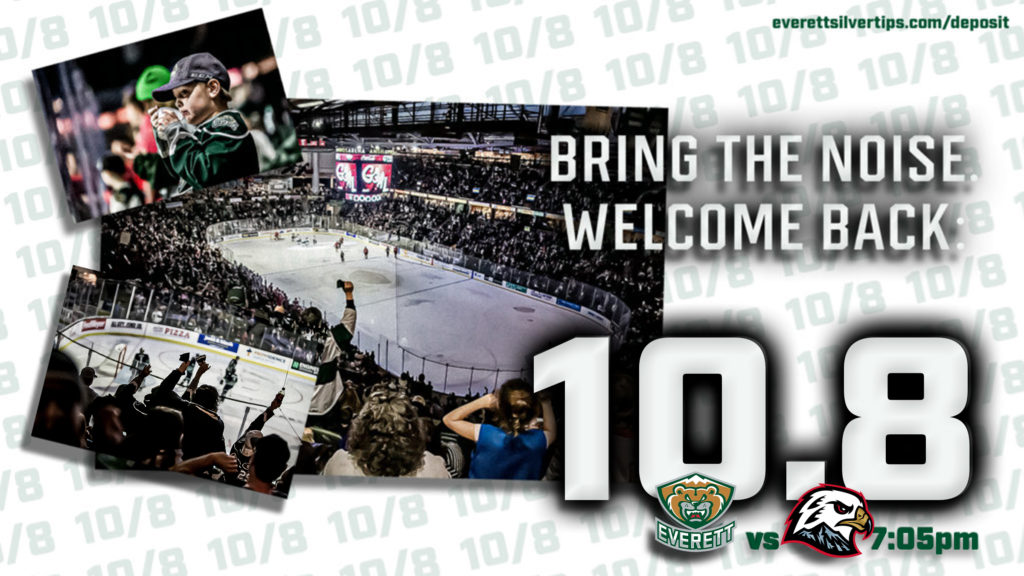 Silvertips to Open Doors to Hockey Fans Once Again for Home Opener on Friday, Oct. 8 against Portland at 7:05 p.m.

EVERETT, Wash. – The Everett Silvertips (@WHLSilvertips), two-time Western Conference champions and eight time U.S. Division champions of the Western Hockey League, announced today their 19th season of home games will open on Friday, Oct. 8 against the Portland Winterhawks, projecting to open their doors to fans and unveil their eighth U.S. Division championship banner at Angel of the Winds Arena before puck drop at 7:05 p.m.

Priority seating and guaranteed home opener tickets are available now by placing a $50 deposit for Silvertips Season Ticket or Mini-Plan Packages (available in full season, 22-game, of 14-game plans) at www.everettsilvertips.com/season or by calling (425) 252-5100 (extension 1). Ticket accounts in progress of renewal from the 2019-20 season have a deadline of Sunday, June 20 at 11:59pm PT where afterward, seat change requests will begin to be honored.

The Silvertips home opener has been released in conjunction with the Western Hockey League announcing a full restoration of a 68-game regular season schedule, opening for select teams on Oct. 1 with the goal of lifted restrictions and 100 percent fan capacity available (subject to change and with approval from each region’s local health officials). 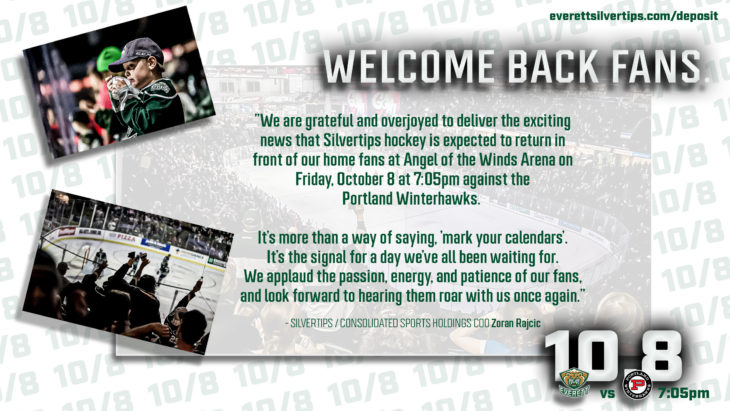 “We are grateful and overjoyed to deliver the exciting news that Silvertips hockey is expected to return in front of our home fans at Angel of the Winds Arena on Friday, October 8 at 7:05pm against the Portland Winterhawks,” said Consolidated Sports Holdings chief operating officer Zoran Rajcic. “It’s more than a way of saying, ‘mark your calendars’. It’s the signal for a day we’ve all been waiting for. We applaud the passion, energy, and patience of our fans, and look forward to hearing them roar with us once again.”

Rajcic continued, “Angel of the Winds Arena on game night is an environment built by our fans as one of the most intimidating and energetic in all of hockey, and we want to see everyone back safely. As we are still vigorously following state and local health guidelines to meet the goal of 100 percent capacity, we encourage our fans to do so as well, and will be announcing further details soon.”

To celebrate the home launch of Silvertips hockey for the 2021-22 season, “Select-A-Seat” returns on Tuesday, July 6, hosted in a virtual format. Phone call appointments will be scheduled starting June 21 to renewed accounts interested in new seating arrangements, and new season ticket and mini plan accounts will begin arrangements from July 6-9. Fans will have one-on-one attention with a Silvertips ticket sales representative, and first right of refusal for account options for the 2021-22 season.

The Silvertips have gone 6-4-1-1 in home openers, dating back for the last 12 seasons. Last season, the Silvertips went 10-1 on home ice in the shortened 23-game schedule, en route to their eighth U.S. Division title, and were tied for the league lead (10) in home wins with Brandon and Kamloops.

Related Links
Get ahead of the line for tickets: $50 deposit (Select-A-Seat is 7/6)
More News