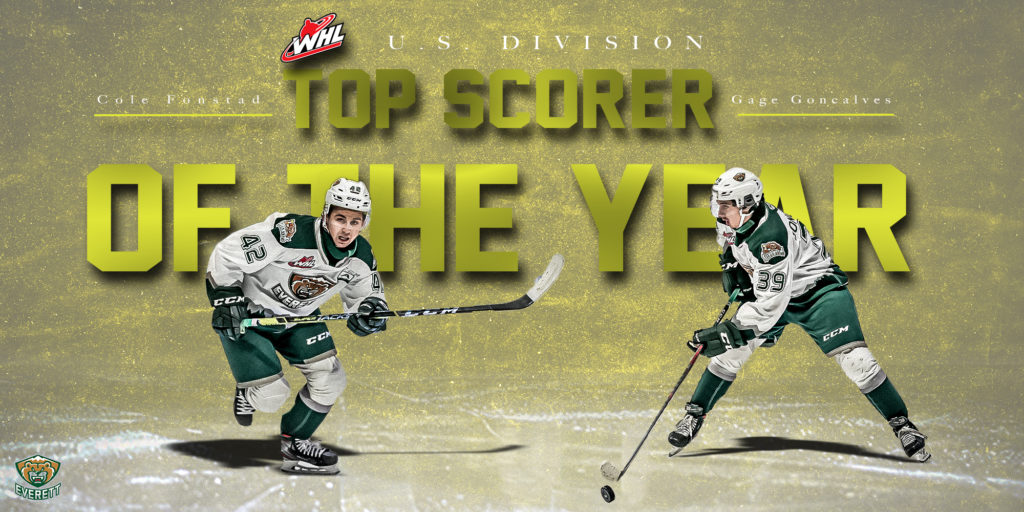 EVERETT, Wash. – The Everett Silvertips, eight-time U.S. Division champions and two-time Western Conference champions of the Western Hockey League, announced in conjunction with the league that Silvertips forwards Cole Fonstad and Gage Goncalves have been named co-recipient of the WHL U.S. Division Top Scorer award, presented this season to the player generating the most points in the U.S. Division for the 2021 WHL season.

Fonstad and Goncalves, sharing the Silvertips Top Scorer Awards and U.S. Division scoring lead with 34 points in 23 games, earned the award as they also finished as the top two point producers in the Western Conference.

“Cole Fonstad and Gage Goncalves embraced the role each as go-to point producers, every shift and every night,” said Silvertips head coach interim general manager Dennis Williams. “They were focused on making a difference, and in the end it not only led to well-deserved, standout recognition in our group, but across the league. We’re proud of their accomplishment, their passion for being their best, and their testimony to the results that come from dedication.”

“I am extremely grateful and thankful to accept, along with Cole Fonstad, the WHL U.S. Division Top Scorer award,” said Goncalves. “Head coach Dennis Williams, assistant coach Louis Mass, ‘Fonny,’ and my teammates were instrumental in our success this season and it helped make me a better player. It’s played a big part in developing my confidence with the puck at a higher level, and give vision for what it takes to succeed in the pros.”

“Along with Gage Goncalves, I’m excited and grateful to accept the WHL U.S. Division Top Scorer Award,” said Fonstad. “To just have a season for us to develop was terrific. To have an opportunity in Everett and win a division title, play with terrific teammates and for terrific coaches, and reach a day like this is even more special. I owe a lot of gratitude for their help and closing a memorable chapter in my life as a WHL player.”

He was held scoreless for only two games, and four times earned three points in a game or more including Apr. 6 when his one goal, three assist effort (all on the final three goals of the game) produced a season high four point night 6-4 comeback win over Portland in downtown Everett.

The 5-foot-10, 183 pound forward finished his WHL career with 281 points (92g-189a) in 293 games with the Silvertips and Prince Albert Raiders and helped guide Prince Albert to a WHL championship and appearance in the Memorial Cup in 2018-19 when he registered 73 points (29g-44a) in 67 games along with six points (2g-4a) in 21 playoff games. He made his pro debut on an amateur tryout offer (ATO) with the Cleveland Monsters, earning an assist in his debut and suited up in a pair of games.

Named Silvertips co-Most Valuable Player last season, Fonstad was originally acquired on Oct. 13, 2019 from the Prince Albert Raiders and posted 65 points (13g-52a) in 51 games with the Silvertips after the transaction. He was originally selected by the Montreal Canadiens in the fifth round of the 2018 NHL Draft.

🚨 We have a 3-3 game in Everett!!🚨 @TBLightning prospect @GageGoncalves with a snipe for the @WHLSilvertips! pic.twitter.com/BKSEdGRef7

Goncalves, 20, was selected by the Tampa Bay Lightning in the second round (62nd overall) of the 2020 NHL Draft and made his pro debut with the Syracuse Crunch, earning an assist in two games, shortly before being returned to the Silvertips for the regular season. The Mission, British Columbia native proceeded to tie Fonstad for the club lead in scoring and paced the Silvertips with 22 assists, adding a +17 rating, a pair of game winning goals and a Tips leading 10 power play points.

Goncalves earned three points in a game or more on five occasions including a season high four points twice and turned in his first career hat trick on Mar. 28 against Tri-City in downtown Everett. He finished the season with 12 points in seven games and concluded his season with three assists at Seattle on May 8.