SELECT-A-SEAT MONTH IS HERE | CLICK HERE FOR DETAILS & LOCK IN THOSE SEATS YOU HAVE ALWAYS BEEN LOOKING FOR!
June 1, 2022 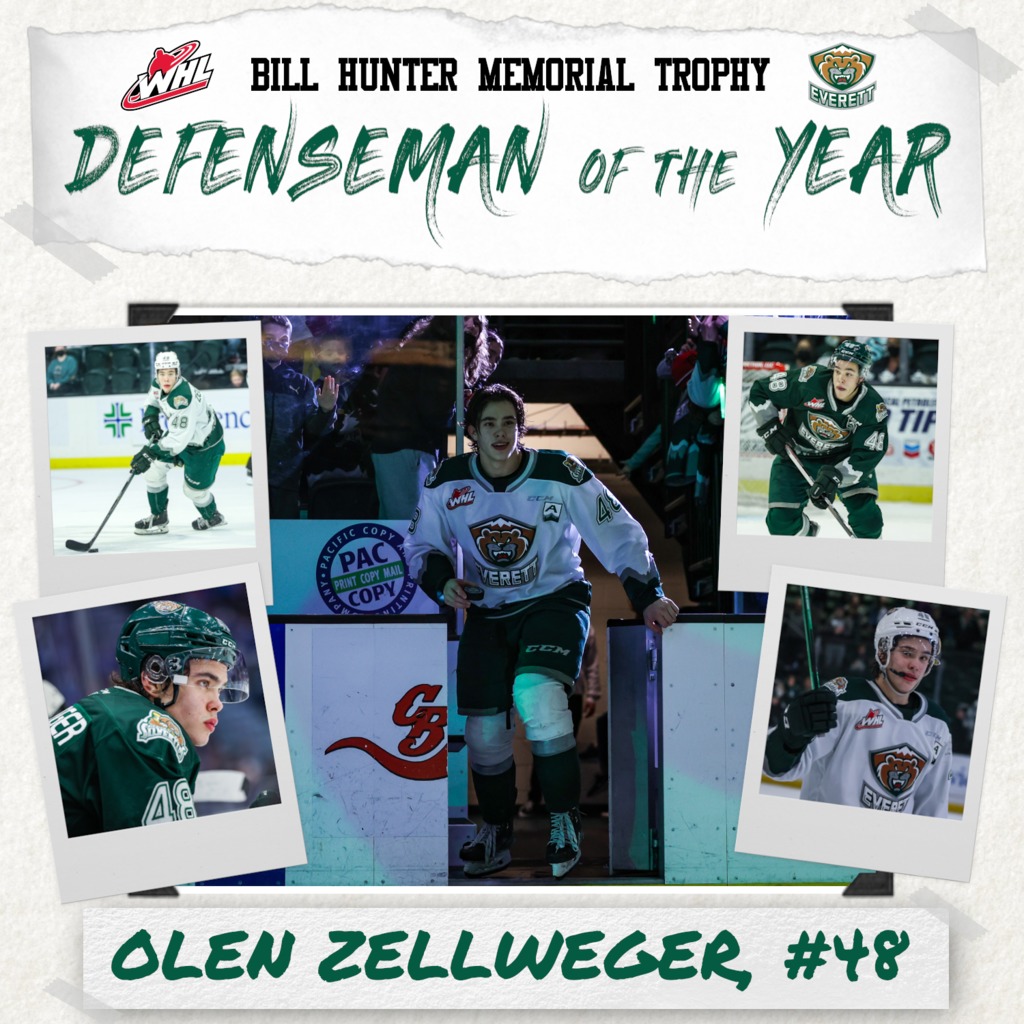 “I’m very honored,” commented Zellweger in his acceptance speech. “I couldn’t have gotten here without my teammates, my coaching staff and everyone involved in Everett. I’d also like to thank my parents and my billet family. It was a great season and I’m very honored to have played with our team there.”

"I'm very honored to take this award. I couldn't have gotten here without my teammates, coaching staff and everyone involved in Everett."

“Olen did an unbelievable job for us this season,” commented Silvertips head coach/general manager Dennis Williams. “He’s worked incredibly hard to get to where he is. His attention to detail, his hockey IQ, his compete, it’s what separates him as a player. We’re very proud of all that he’s been able to accomplish.”

A second-round pick by the Anaheim Ducks in the 2021 NHL Draft, Zellweger led all Canadian Hockey League defensemen in scoring (78 points), points-per-game (1.42) and assists (64) in 55 games played. His 64 assists were second-most amongst all WHL skaters behind only Arshdeep Bains of the Red Deer Rebels, and were also just three less than the Silvertips’ franchise record of 67 set by Patrick Bajkov in 2017-18. His 1.42 points-per-game average is the best by any 18-year-old WHL defenseman in 32 years, the previous high being set by Scott Niedermayer’s 1.44 average in 1990-91 with the Kamloops Blazers.

About the Bill Hunter Memorial Trophy

The Bill Hunter Memorial Trophy recognizes a WHL defenseman who has demonstrated the best all-around ability at his position during the WHL Regular Season.

Born in Saskatoon, Sask., Hunter is honored for his role in the establishment and sustained success of the WHL. Dedicated and enthusiastic to growing Major Junior hockey, Hunter served as the Owner, General Manager, and Coach of the Edmonton Oil Kings in addition to being a co-founder of the league.

Along with long-time friend, the late Scotty Munro, the pair helped to lead the league’s growth through its formative years.

* Denotes CHL Defenseman of the Year