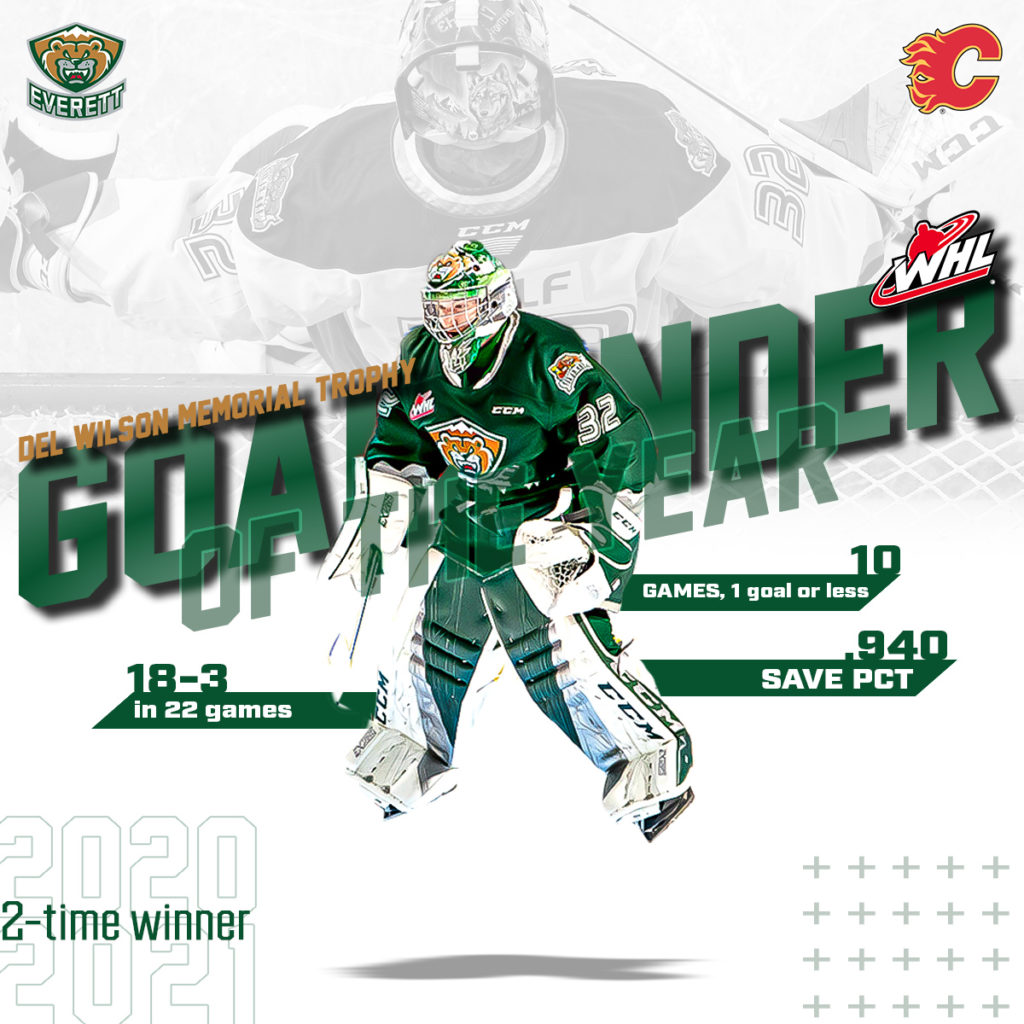 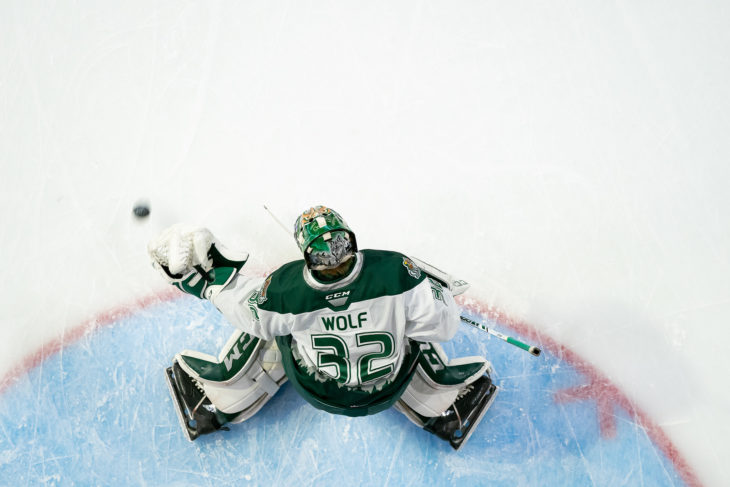 EVERETT, Wash. – The Everett Silvertips, eight-time U.S. Division champions and two-time Western Conference champions of the Western Hockey League, announced in conjunction with the league that for the second consecutive year, Silvertips goaltender Dustin Wolf has been named recipient of the Del Wilson Memorial Trophy for WHL Goaltender of the Year.

Wolf becomes the fifth Silvertips goaltender in six seasons to earn the Del Wilson Trophy, joining Carter Hart who was the recipient three years in a row, 2016-18.

“A player like Dustin who competes every day and never lets up on his approach tends to discover incredible rewards for his effort, and it’s well deserved to see him earn the Del Wilson Memorial Trophy for the second consecutive year as WHL Goaltender of the Year,” said Silvertips head coach and interim general manager Dennis Williams. “Dustin is simply focused and driven on being the best – every practice and every game.”

“Milestones like these are what you set out to accomplish each and every year and it’s my job to be the best out there, every game and every year,” said Wolf. “With that mentality in mind, it’s an honor to accept the Del Wilson Memorial Trophy for the second straight year. Over my four-year span in Everett, I’ve been fortunate for the time early on to work along a former teammate like Carter Hart and use that to my advantage when the workload increased. He’s had success in the NHL and it’s my mission to follow in those footsteps. Some games are easier and harder than others – and I wouldn’t be receiving this without the hard work of my teammates and coaching staff. I am incredibly grateful for them.”

The Gilroy, Calif. native was named WHL U.S. Division Player of the Year, Goaltender of the Year, and member of the U.S. Division All-Star Team after returning from the pause of the coronavirus pandemic to record shutouts in his first three games and set a new Silvertips record for longest shutout streak, dating back to the end of 2019-20, at 216:27. He finished 18-3-0-0 in 22 games with a 1.80 goals-against average, .940 save percentage, and four shutouts as the Silvertips claimed their fourth U.S. Division title in five seasons.

The 6-foot-0, 168-pound goaltender led the league in wins, finished tied for first in shutouts, and was second in goals against average and save percentage.

Wolf allowed only one goal or less in ten appearances. He was twice named WHL Goaltender of the Week and ended the U.S. Division championship campaign with wins in his final four games, earning a .934 save percentage with 100 saves on 107 shots.

Wolf, 20, was selected in the seventh round by the Calgary Flames in the 2019 National Hockey League Entry Draft and is 106-34-4-2 in 149 games for his career, all in a Silvertips jersey. His 24 career shutouts are second all-time in franchise history and third in WHL history, trailing Tyson Sexsmith (Vancouver) and former teammate Carter Hart with 26. Before this season, he earned a gold medal with USA Hockey at the 2021 World Junior championships, was 2-1-0-0 in his pro debut with the Stockton Heat (AHL), and last season was named WHL and CHL Goaltender of the Year. Last season, Wolf was named USA Hockey’s winner of the Dave Peterson Goaltender of the Year award, honoring the top junior level goaltender in the United States.