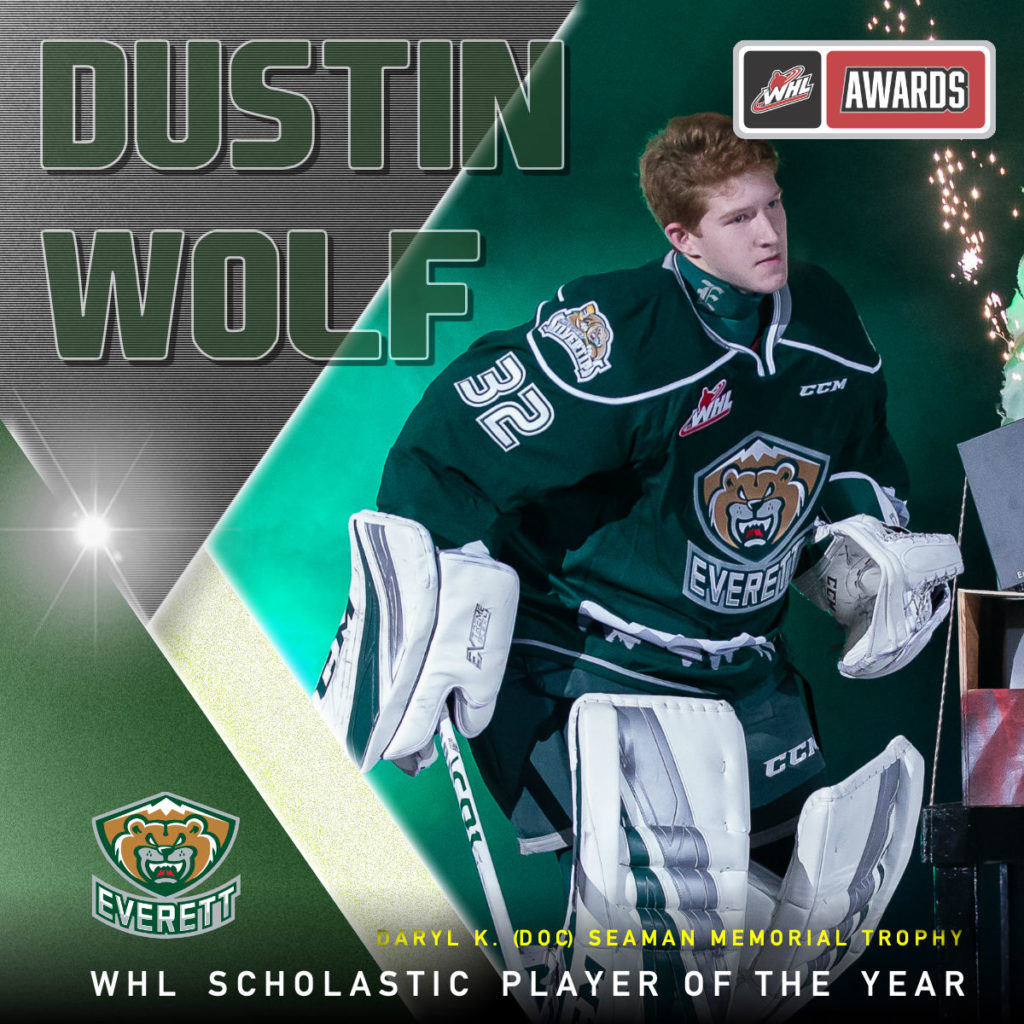 EVERETT, Wash. – The Everett Silvertips (@WHLSilvertips), proud member of the Western Hockey League, announced in conjunction with The WHL today that goaltender Dustin Wolf of the Silvertips has been named recipient of the Daryl K. (Doc) Seaman Memorial Trophy as WHL Scholastic Player of the Year.

Wolf, 18, was recognized for maintaining a 100 percent average on his current academic year, as well as an overall average of 98.8 percent for his high school years. Wolf achieved perfect grades in English 12, Statistics, Economics, and American Government courses for grade 12.

“Winning an award like this isn’t easy to accomplish and wouldn’t be possible without the help of great people like Education Coordinator Darren Parsons, the Silvertips organization, and without question my parents,” said Wolf. “When you go through a routine of working on your game at the rink every day, then going home to study late into the night and also on road trips, a day like this is something to really take pride in. It’s a very exciting honor and I’m very grateful for the recognition.”

“Getting to know Dustin the last two seasons, it’s clearly evident he has maturity years beyond his age and dedication that is elite level,” said Parsons. “Well-deserved congratulations goes to Dustin for this achievement. He’s constantly stayed on top of his education and surpassed the rigorous combination of an education and hockey schedule. He provides invaluable leadership to other individuals going through his similar channels.”

This season, his first for NHL Draft eligibility, the native of Tustin, Calif. reached final rankings status (12th overall, North American goaltenders) by NHL Central Scouting while completing his regular season as the WHL leader in wins (41), save percentage (.936), goals-against-average (1.69), minutes (3,615), was second in shutouts (7), and fourth in saves (1,493), while setting a new Silvertips single season record in wins, posting the second highest save percentage in the franchise’s single season history, the second lowest goals-against-average in franchise history – and fourth lowest in WHL history.

Wolf, named WHL Western Conference first team All-Star and Western Conference Goaltender of the Year this season, is 54-21-2-2 over 81 regular season games in his WHL career with the Silvertips, along with a .934 save percentage, 1.83 goals-against-average, and 11 shutouts.

It is the second time for a Silvertip player in three years to have claimed the WHL Scholastic Player of the Year award. Forward Brian King (2015-17) earned the award in 2016-17.