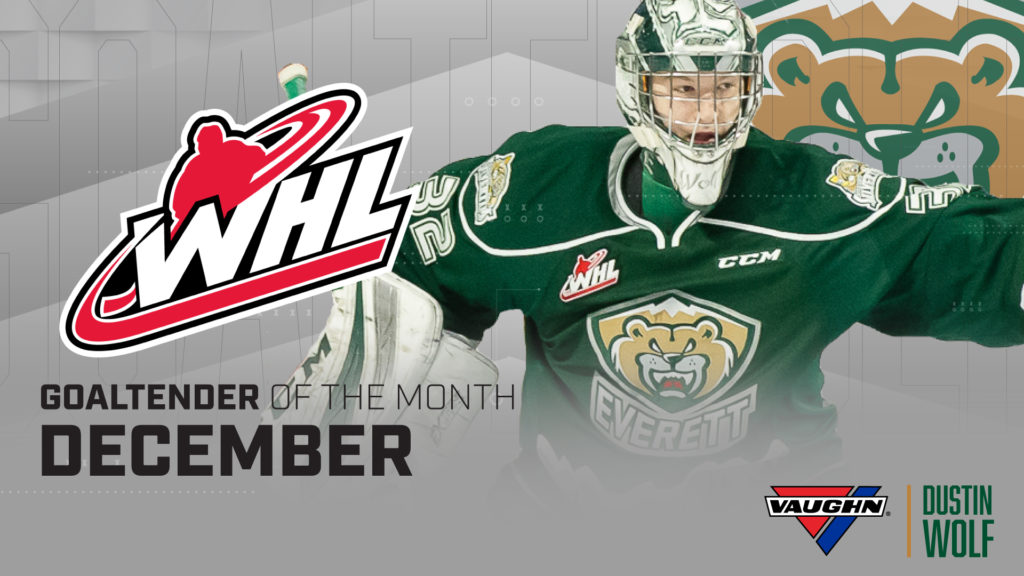 EVERETT, Wash. – The Everett Silvertips (@WHLSilvertips), defending Western Conference champion and six-time U.S. Division champion of the Western Hockey League, announced in conjunction with the WHL that Silvertips goaltender Dustin Wolf has been named WHL Vaughn Goaltender of the Month for December. It is the first monthly honor of Wolf’s career and the fifth Silvertip honoree in the last two seasons.

Wolf posted a 6-0-0-1 record, 1.27 goals-against-average, stopped 193 of 202 shots for a 0.955 save percentage, and recorded one shutout as the Silvertips went 8-0-1-0 in the month of December, keeping the Silvertips at the top of the U.S. Division and the WHL’s Western Conference.

The native of Tustin, Calif. helped the Silvertips extend their undefeated in regulation streak to 16 games with a 14-0-1-1 record. Wolf hasn’t lost in regulation to a divisional opponent since Friday, November 16, 2018 against the Portland Winterhawks.

Originally selected in the fifth round, 104th overall, of the 2016 WHL Bantam Draft, Wolf was named the WHL Eli Wilson Goaltending Goaltender of the Week and Vaughn CHL Goaltender of the Week for the week ending Sunday, December 9. Wolf closed out that week with a 21-save shutout against the Spokane Chiefs, his third of the season and the seventh of his WHL career. The 5-foot-11, 160-pound goaltender was earned first, second, and third star honors of a game once each throughout the month, also earning third star of the night honors once for the entire league.

Through 35 games this season, Wolf has compiled a 26-7-1-0 record, 1.79 goals-against-average, 0.930 save percentage, and three shutouts. Those figures have Wolf leading the league in wins, second in shutouts, second in GAA, and third in SV%.

Wolf has appeared in 55 WHL regular season games, posting a 39-13-1-0 record, 1.95 GAA, 0.929 SV%, and seven shutouts (fifth on the Silvertips all-time list). NHL Central Scouting identified Wolf as a prospect eligible for selection at the 2019 NHL Draft with a ‘C’ rating on their most recent ‘Players to Watch’ List, released in November 2018.

The Silvertips next face the Tri-City Americans on Friday, a 7:05 p.m. (KRKO / Tips App / WHL Live) road game at Toyota Center and return home this Saturday against the Americans at 7:05 p.m. in downtown Everett. Tickets for Saturday’s game, along with a 4:05 p.m. Sunday home game against the Kamloops Blazers are available at http://www.everettsilvertips.com/tickets.