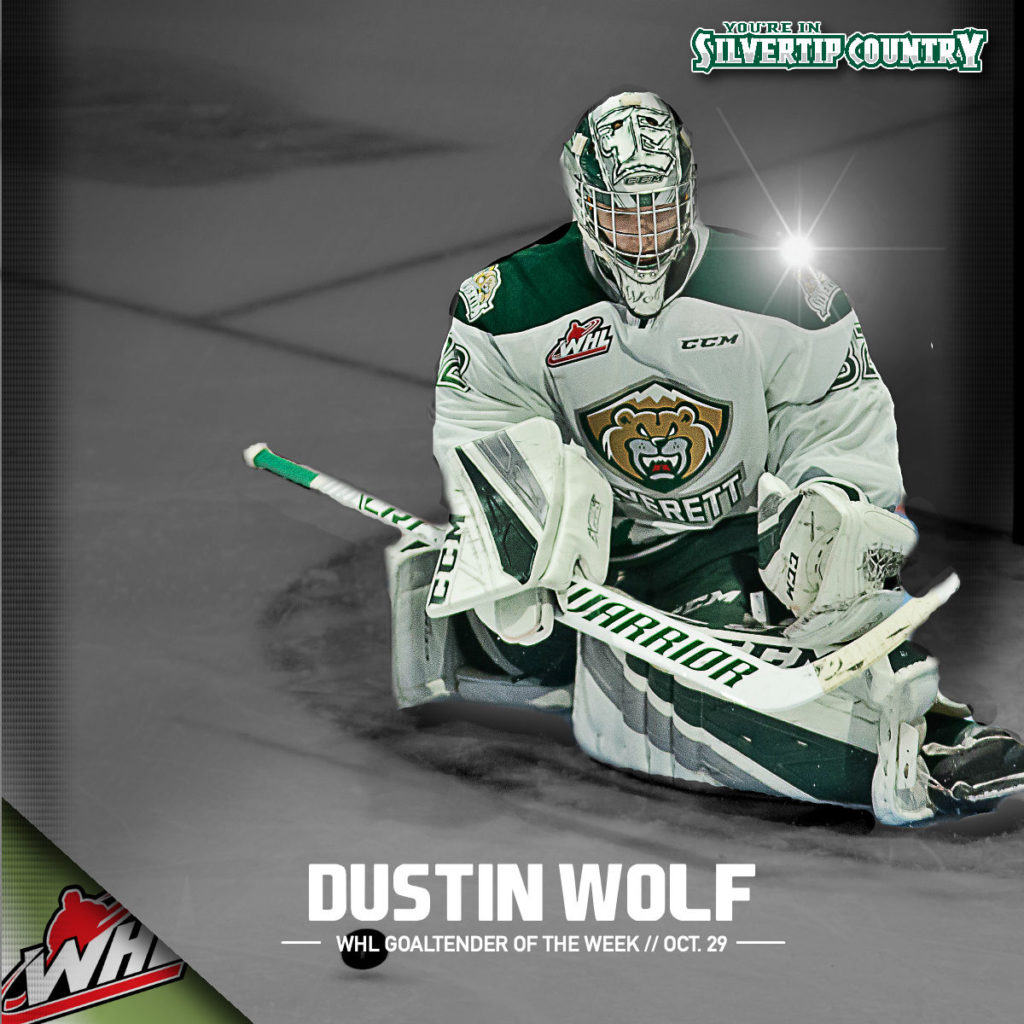 It’s the second WHL weekly honor in Wolf’s career, also named nominee for CHL Goaltender of the Week. Wolf earned his first WHL and CHL weekly award last season after earning victories in his first two starts of his career at Kamloops and Portland.

Wolf, a 2001-born goaltender eligible for the 2019 NHL Draft in Vancouver, led the Tips to a 3-1-0-0 run on the road last week and helped the Silvertips finish 5-2-0-0 in their season long seven-game road trip and first place in the U.S. Division, playing in every minute between the pipes. He earned a 1.01 goals-against-average, save percentage of .959, one shutout, and stopped 93 of 97 shots in victories over Saskatoon, Moose Jaw, and Swift Current.

The only loss (3-0) that Wolf took was a 27-save effort against the Prince Albert Raiders, who entered the week as the #1 ranked CHL team and were limited to three goals or less for just the fourth time this season. Wolf rebounded the next night with his fifth career shutout at Saskatoon, a 3-0 win with 23 saves and third star honors of the night in the WHL.

The Tustin, Calif. native helped guide the Tips to a 2-1 overtime win at Moose Jaw last Friday in a 21 save effort. He then earned 22 saves in the Tips rematch win at Swift Current (4-1), the first meeting since the 2018 WHL Championship Series. Wolf helped the Tips penalty kill go 16-of-17 during the week, covering four games.

Wolf is 10-5-0-0 in 15 games, third in the WHL for goals-against-average (1.74), second in wins (10), the league leader in minutes (894), and sixth in save percentage (.929). He was selected by the Tips in the fifth round of the 2016 WHL Draft, suited up for Team USA at the 2018 Hlinka Gretzky Cup and participated in the 2018 USA Hockey All-American Prospects Game at Xcel Energy Center in Minnesota, one of 42 top U.S. born players identified as eligible for the upcoming NHL Draft.