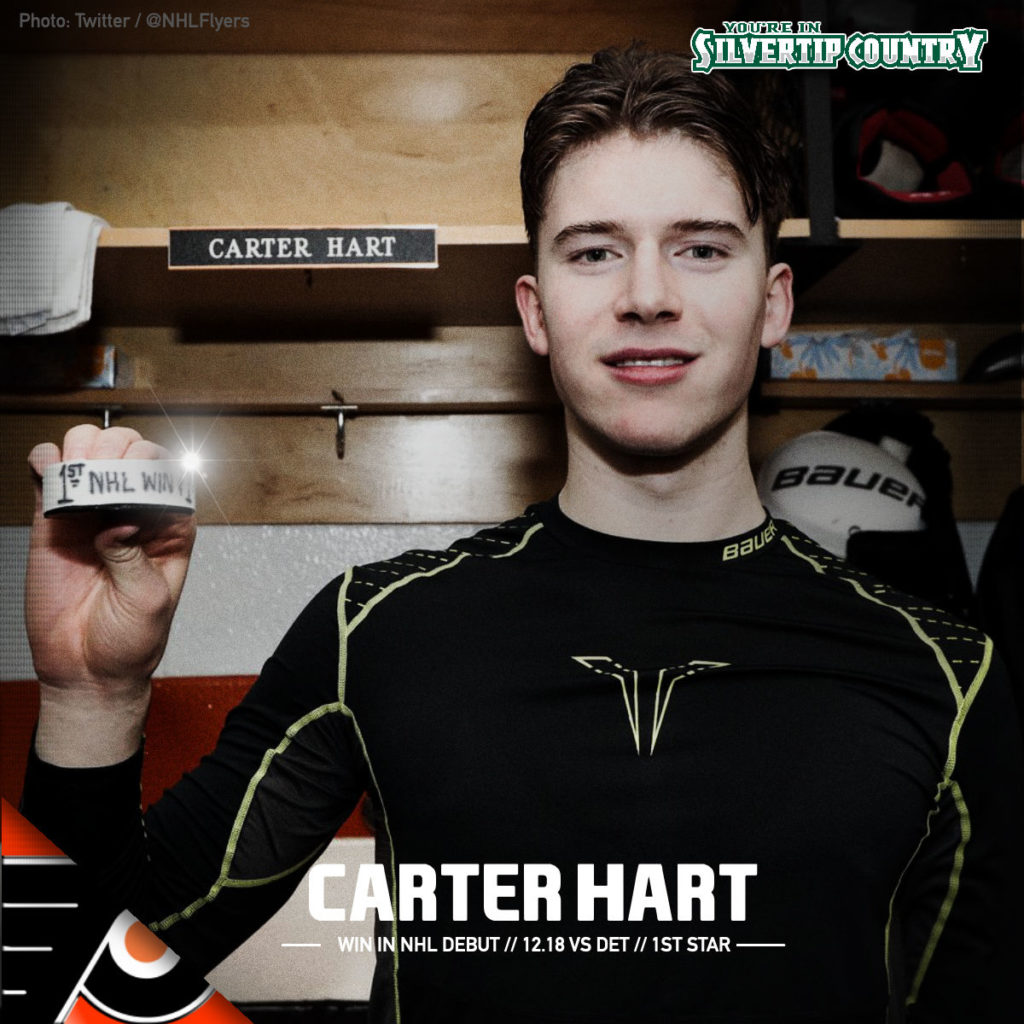 EVERETT, Wash. – Goaltender Carter Hart, last season’s Western Hockey League Player of the Year and back-to-back-to-back Most Valuable Player of the Everett Silvertips, earned a win and first star of the game honors in his NHL debut with the Philadelphia Flyers while becoming the 19th player to suit up and play in the NHL after skating for the Silvertips, as his Flyers defeated the Detroit Red Wings, 3-2, on Tuesday night at Wells Fargo Center in Philadelphia.

She was overwhelmed with emotion watching her son make his NHL debut ❤️ pic.twitter.com/zWoNiFCvSp

This season, Hart had a record of 9-5-2-1 with a .901 save percentage and one shutout with Lehigh Valley (AHL), winning five of his last seven games and has allowed two goals or less in four of his last five starts. His first career pro shutout came on Dec. 7, a 1-0 win over Hershey. At the conclusion of four full WHL seasons (2014-18) in a Silvertips jersey, he finished last season helping guide the club to their second Western Conference title and appearance in the Rogers WHL Championship Series.

Hart was named WHL First Team All-Star and honored as back-to-back-to-back recipient of the Silvertips Most Valuable Player award last season, and his lifetime record stands at 116-46-10-2 with a .927 save percentage, 2.01 goals-against-average and 26 career shutouts in 190 games, all with the Silvertips. He is the franchise goaltending leader in wins (116) and is tied for the WHL all-time lead in shutouts (26).

He helped Canada capture the gold medal at last season’s World Junior Championship tournament and is a second round selection (48th overall) of the Philadelphia Flyers in the 2016 National Hockey League Entry Draft. He had a 13-game winning streak last season and was the first goaltender since Darcy Kuemper (Red Deer) to earn the Four Broncos Memorial Trophy.

After his first CHL Goaltender of the Year award in 2015-16 with the Silvertips, he was the first goaltender selected in the 2016 NHL Draft, in the second round (48th overall) by Philadelphia.

Currently, there are seven active players in the NHL who have skated with the Silvertips: