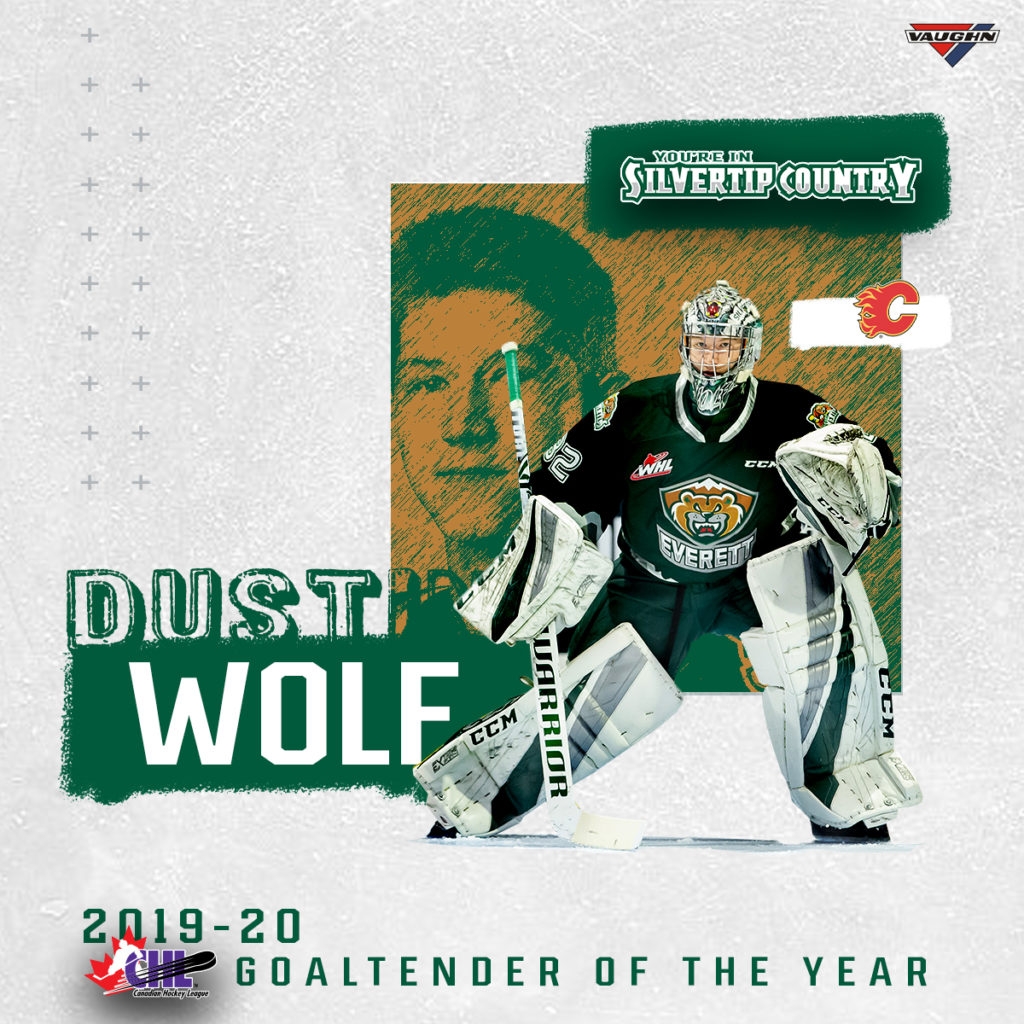 EVERETT, WA – The Everett Silvertips, proud seven-time U.S. Division champion and two time Western Conference champion of the Western Hockey League, announced today in conjunction with the Canadian Hockey League that goaltender Dustin Wolf has been named 2019-20 CHL Goaltender of the Year. The award is the first of Wolf’s career, and the third time in the last five seasons a Silvertips goaltender has captured the award.

The honor comes five days after Wolf was named recipient of the Dave Peterson Goaltender of the Year award by USA Hockey, presented to the top goaltender out of a pool of American-born goaltenders who compete at the junior level each year. Additionally, he was named WHL Goaltender of the Year as recipient of the Del Wilson Memorial Trophy for the 2019-20 season, also the first time as the award recipient for his career and the fourth Silvertip goaltender in the last five years (Carter Hart, 2016-18).

“Dustin Wolf’s incredible run of achievements in the last month has led to a well-deserved honor as Canadian Hockey League Goaltender of the Year and it’s been said over and over, we’re extremely proud of him across this hockey community,” said Silvertips general manager Garry Davidson. “He earned this with discipline, work ethic, and execution by design that was to be unmatched across North America. This great day is also a testimony to his commitment, and a great example of opportunities presented to players who choose to wear Silvertip green, along with the hard work they put in to reach their goals every day. As well, for the winner of this award to come out our program three times in the last five years is very telling of the coaching and staff in place to assist with their goals, an achievement for those in charge of helping elevate the future of this game.”

“It’s an incredible feeling and honor to accept the CHL Goaltender of the Year award, and along with it comes plenty of gratitude,” said Wolf. “I thank my teammates, the coaching staff in Everett including Dennis Williams, Louis Mass, and Mike Lysyj, our goaltending coach James Jensen – a continuous support every day, on and off the ice – the Calgary Flames, and my parents Mike and Michelle. Lastly, I thank the fans for their energy every night during the season, on the way to an unforgettable milestone. It’s a pleasure playing in front of them, and I look forward to seeing them next season.”

Wolf, 19, finished as leader or tied for the WHL lead in four goaltending categories: wins, shutouts, save percentage, and goals-against-average while, was named Silvertips co-Most Valuable Player and twice was named WHL Vaughn Goaltender of the Month this season. With Wolf between the pipes, the Silvertips reached the top of the WHL’s U.S. Division and Western Conference with a 44-12-3-1 record through 60 games, good for 92 points and finishing the season with victories in 13 of their final 14 games, a 46-13-3-1 record, 96 points – second most in the U.S. Division and entire league.

“From day one of training camp, Dustin demonstrated commitment to prove he’s an elite goaltender not just in the WHL, but for his age group across North America,” said Silvertips head coach Dennis Williams. “Today is recognition of that effort and we’re extremely proud to see him named CHL Goaltender of the Year. His mental drive and compete level remained constant from practice, to warmups, to the final horn. It’s had a tremendous impact on his teammates and culture. The amazing part is he’s only begun to scratch the surface of how great he can be. I’m looking forward to what he’ll set his mind to next, and in the meantime, today is a great day to recognize his well-deserved achievement.”

CHL Goaltender of the Year Award, Past Recipients:

He needs seven shutouts to set a new Silvertips and WHL career record, currently shared by Hart and Tyson Sexsmith of Vancouver (26). His international resume has included representing USA Hockey at the 2020 IIHF World Junior Championships, earning a victory in his sole appearance and with the U.S. on the international stage in 2018, finishing 2-1-0-0 with one shutout in the Hlinka Gretzky Cup.

The 6-foot, 161-pound goaltender, who was the fifth consecutive honoree from the Silvertips as Western Conference Goaltender of the Year, was last season named CHL Scholastic Player of the Year and WHL (Western Conference) First Team All-Star while going 41-15-2-2 with a 1.69 goals-against-average and .936 save percentage in 61 games, en route to the Silvertips third straight U.S. Division title.