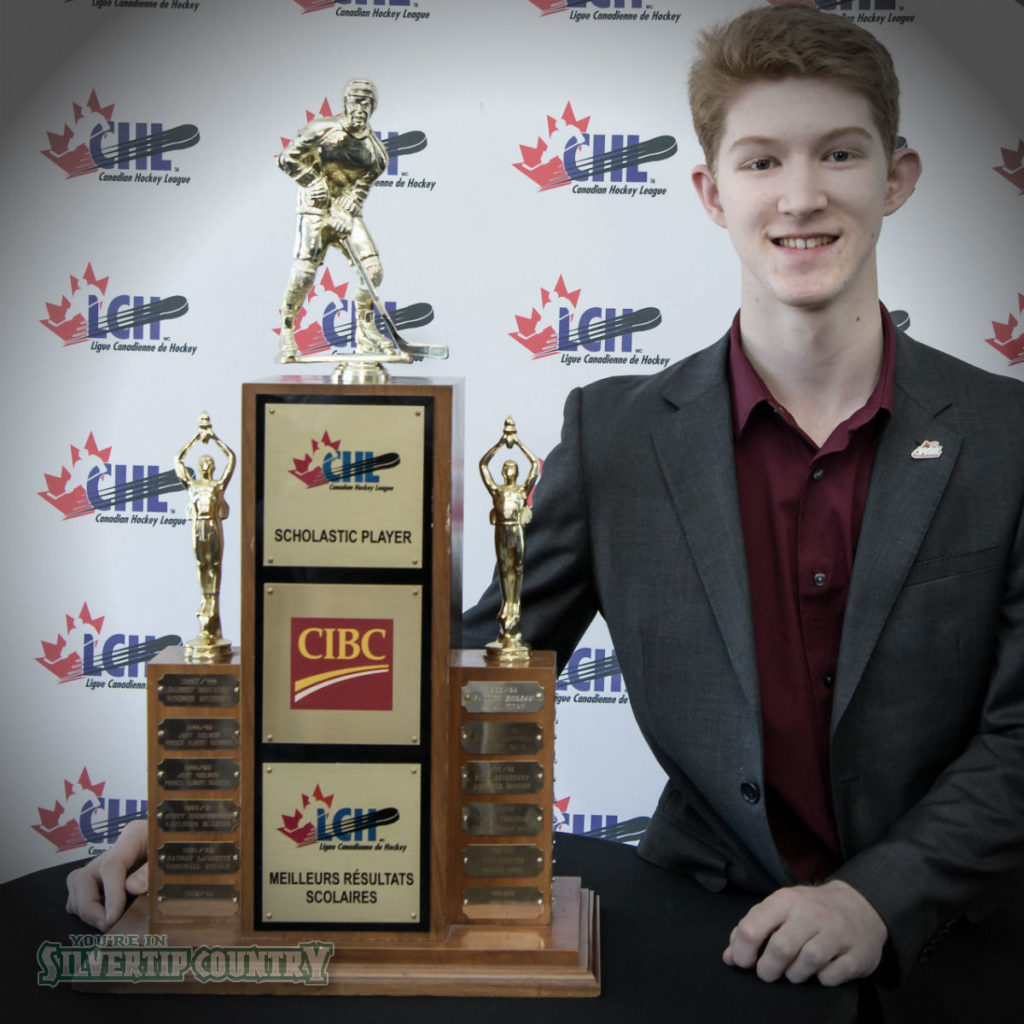 EVERETT, Wash. – The Everett Silvertips (@WHLSilvertips), seven-time U.S. Division champions and the 2018-19 Western Hockey League Business of the Year, announced today in conjunction with the Canadian Hockey League that goaltender Dustin Wolf has been named recipient of the 2018-19 CHL CIBC Scholastic Player of the Year award, presented today at the 2019 Memorial Cup presented by Kia in Halifax, Nova Scotia. This year, Wolf excelled both on the ice and in the classroom, where he maintained a 100% average across a Grade 12 workload covering four courses including English, Statistics, Economics, and American Government.

Overall, Wolf posted a 98.8 percent average over his high school years. This season, while helping backstop the Silvertips to their third U.S. Division title in four seasons, he was also named recipient of the club’s Most Dedicated Player, Community Relations, and Scholastic Player of the Year awards.

“The Everett Silvertips proudly congratulate Dustin Wolf as this season’s CHL CIBC Scholastic Player of the Year,” said Silvertips general manager Garry Davidson. “He is a terrific example of hard work on and off the ice, dedicating himself to excellence on game day and in an educational environment. The routine he embraces sets a great standard for those who compete in our program and for those in the classroom throughout our community.”

“Receiving this award means a lot,” said Wolf. “It goes to show that putting in time and effort makes anything possible. The benefit of our schedule in the WHL gives plenty of playing time, and it challenges you to be on top of time management for success in academics. I wouldn’t be in this position if it wasn’t for our educational provider Darren Parsons and the constant support from my parents, and I thank them tremendously for helping make this moment possible.”

This season, his first for NHL Draft eligibility, the native of Tustin, Calif. was the recipient of the Daryl K. (Doc) Seaman Memorial Trophy (WHL Scholastic Player of the Year) while reaching final rankings status (12th overall, North American goaltenders) by NHL Central Scouting and completing his regular season as the WHL leader in wins (41), save percentage (.936), goals-against-average (1.69), and minutes (3,615). Wolf was also second in shutouts (7), and fourth in saves (1,493), while setting a new Silvertips single season record in wins, posting the second highest save percentage in the franchise’s single season history, the second lowest goals-against-average in franchise history – and fourth lowest in WHL history.

“Dustin’s excellence on and off the ice, combined with his maturity was well rewarded at the WHL Awards, and to be recognized across the entire CHL demonstrates his dedication,” said Parsons. “We’re extremely proud of Dustin, once again. It’s a tremendous cap of season where he dedicated himself to his educational environment and between the pipes, and it’s a fitting testimony to our program. He was relentless on every assignment as he was on his approach to every game day.”

Wolf is the first WHL player to claim the CIBC Scholastic Player of the Year Award since Josh Morrissey (Prince Albert Raiders) in 2013. Finalists this year included Thomas Harley of the Mississauga Steelheads as well as Matthew Welsh of the Charlottetown Islanders.