WOLF // WHL Goaltender of the Month 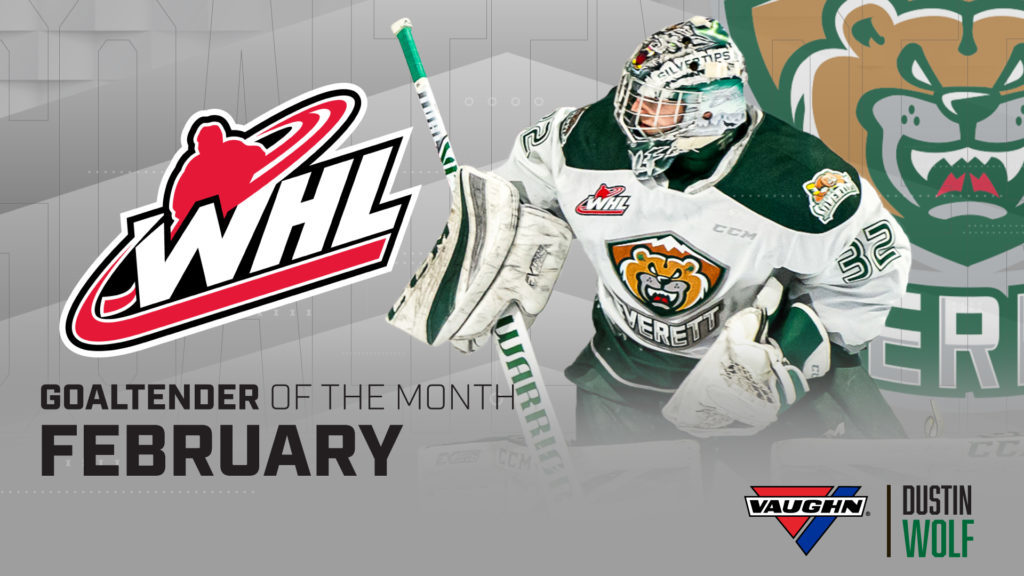 EVERETT, WA-  The Everett Silvertips, in conjunction with the Western Hockey League, announced today that goaltender Dustin Wolf of the Silvertips has been named the WHL Vaughn Goaltender of the Month for February 2020, his second monthly award of the 2019-20 regular season and the seventh Silvertips honoree in the last three seasons.

The native of Tustin, Calif. and the Calgary Flames prospect posted a 9-1-0-0 record, 1.41 goals-against average, stopped 215 of 229 shots for a .939 save percentage, and recorded two shutouts. Thanks in part to Wolf’s strong month, the Silvertips reached the top of the WHL’s U.S. Division and Western Conference with a 44-12-3-1 record through 60 games, good for 92 points and currently on a season high 10-game win streak.

During the calendar month, Wolf recorded shutouts against the Tri-City Americans and Moose Jaw Warriors, also claiming a pair of victories against the Portland Winterhawks, the team the Silvertips were pursuing in the standings, allowing just three goals on 68 shots in those two contests. In addition to the pair of shutouts, Wolf allowed just a single goal in five of the 10 games he appeared in.

This season, the 6-foot-0, 165-pound netminder has compiled a 33-9-2-0 record, 1.83 GAA, .938 save percentage and nine shutouts in 44 games. Wolf currently leads the WHL in all four major statistical goaltending categories. The Flames selected Wolf in the seventh round of the 2019 NHL Entry Draft.

Wolf is currently tied for fifth all-time in WHL history for career shutouts by a goaltender with Dustin Slade and Justin Pogge. His teammate from 2017-18 and Tips alumnus Carter Hart shares the WHL’s all-time record with former Vancouver Giants goaltender Tyson Sexsmith at 26. In 11 WHL playoff games, Wolf has posted a 5-4-1-0 record, 1.99 GAA, .915 save percentage, and one shutout.

At the 2019 WHL Awards, Wolf was named the recipient of the Daryl K. (Doc) Seaman Trophy as the WHL Scholastic Player of the Year.