Wolf // WHL Goaltender of the Week 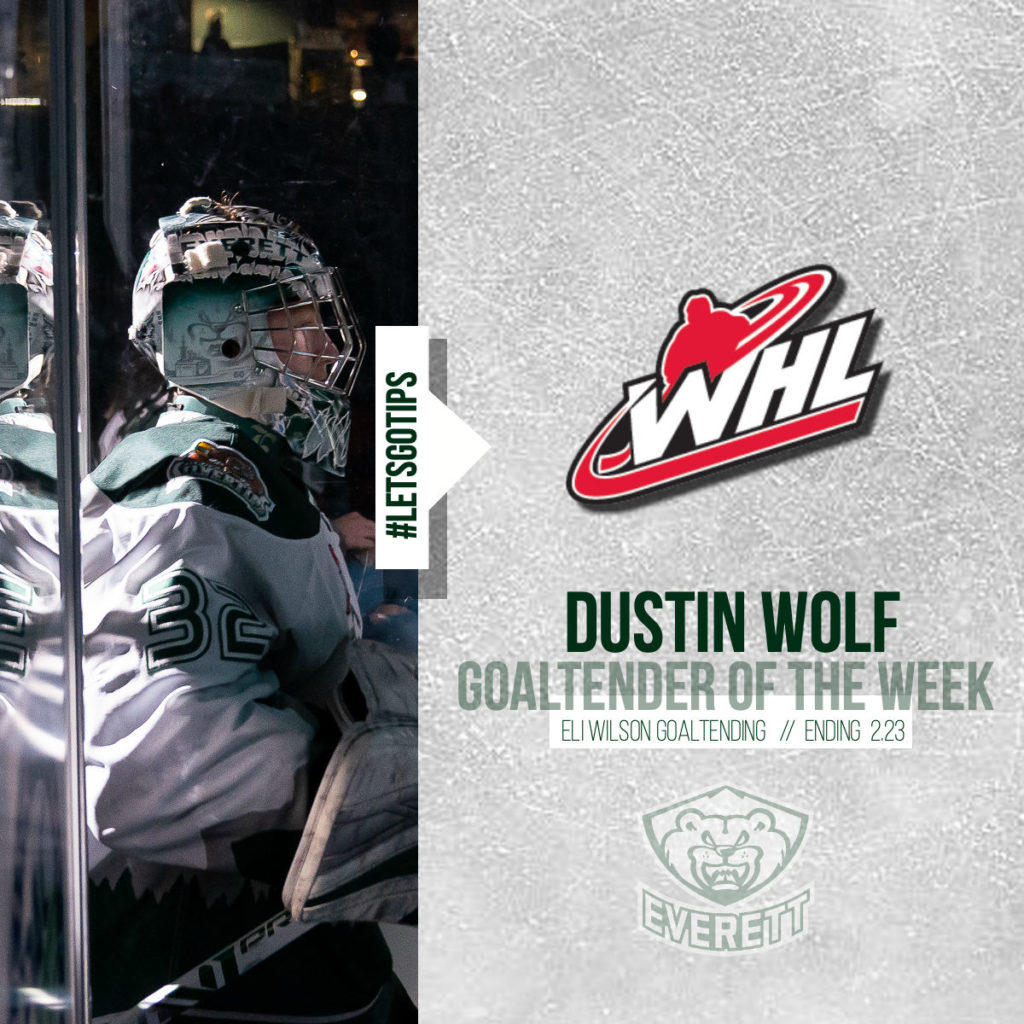 Wolf, 18, went 3-0-0 this past week with 60 saves on 63 shots, a 1.00 goals against average, a .952 save percentage and one shutout, the 20th of his WHL career. Having already secured their spot in the 2020 WHL Playoffs, the Silvertips, reaching within three points of the U.S. Division lead, have a 40-12-3-1 record through 56 games, placing them second in the WHL’s U.S. Division and Western Conference.

Wolf’s week began with a 10-save shutout on Wednesday n a 6-0 win against the Moose Jaw Warriors, his league leading ninth shutout. On Saturday, He made 15 saves on 16 shots in a 2-1 win over the Vancouver Giants, ending an 11-game winning streak by the B.C. Division club.

In a pivotal matchup Sunday, Wolf turned aside 35 of 37 shots in a 6-2 win against the Portland Winterhawks, ending Everett’s schedule of four games in five days – all with wins – and Portland’s run of 22 straight games, unbeaten in regulation at home. Wolf was named the first star of Sunday’s game as well as the second star of the night in the WHL.

The Tustin, Calif. native has appeared in 41 games this season with the Silvertips, posting a 30-9-2-0 record, 1.84 goals against average, a .938 save percentage, and nine shutouts. As of Monday, he leads the WHL in GAA, SV%, and shutouts and is tied for first in wins with divisional rival Joel Hofer from the Winterhawks. The Flames chose Wolf in the seventh round, 214th overall, at the 2019 NHL Draft.

Wolf is third in Silvertips history and tied for fifth in league history with 20 shutouts with Dustin Slade and Justin Pogge. His nine shutouts are tied for third in Silvertips single season history with Carter Hart (2016-17), two away from the franchise single season record (Leland Irving, 2006-07), and his 20 lifetime shutouts are six away from the WHL record shared by Hart and Tyson Sexsmith.

The Tustin, Calif. native was selected by the Calgary Flames in the seventh round (214th overall) of the 2019 National Hockey League Entry Draft and earned a victory in his first prospect game appearance with the Flames, an 18-save performance against the Edmonton Oilers in a 3-1 victory at Scotiabank Saddledome on Sept. 10.