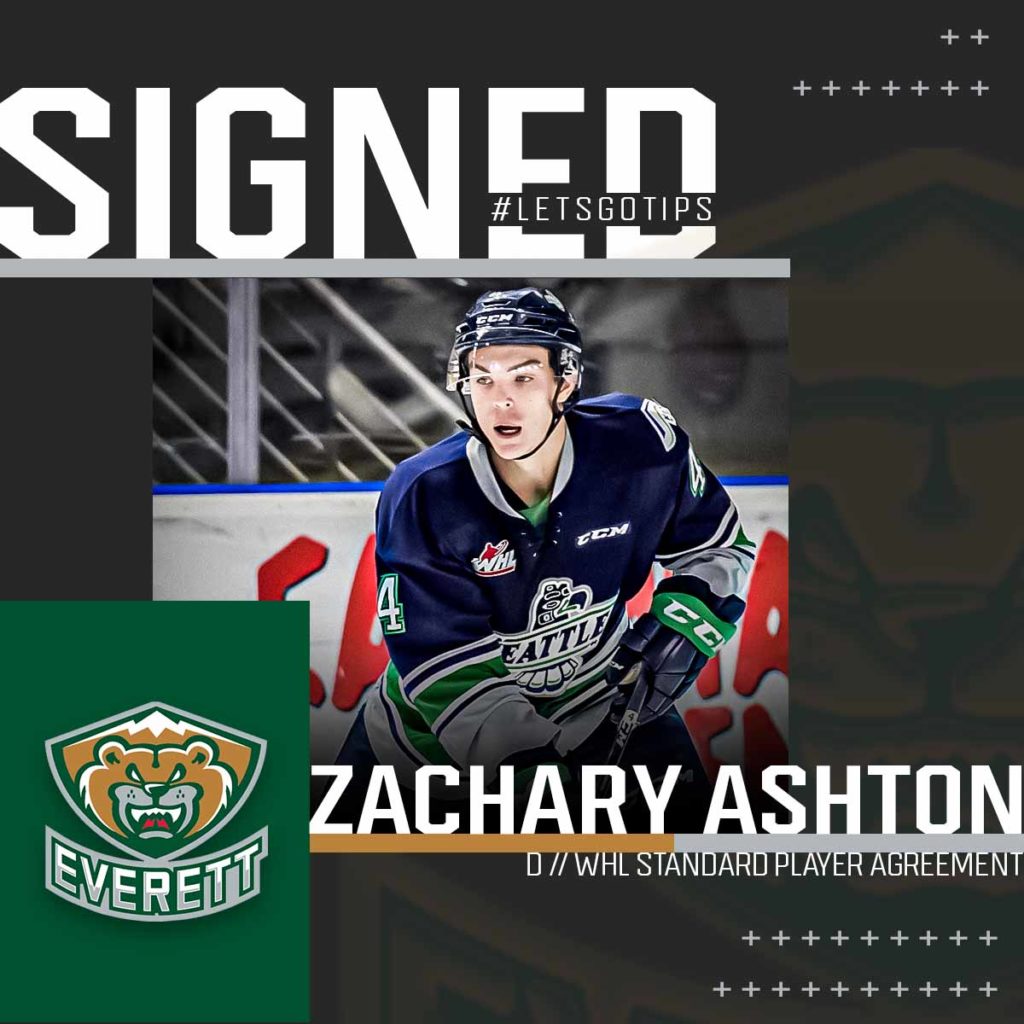 Former Alberta Cup, World U16 champion will wear #5 on the Silvertips blueline

EVERETT, WA – The Everett Silvertips, proud seven-time U.S. Division champion and two-time Western Conference champion of the Western Hockey League, has signed 2001-born defenseman Zachary Ashton to a WHL standard player agreement. Ashton continues his WHL playing career with the Silvertips, guaranteed a WHL Scholarship for every year he plays in the WHL.

“Zachary is an experienced, right-handed shot defenseman with the abilities to contribute from the outset,” said Silvertips general manager Garry Davidson. “As he enjoyed a tremendous bantam career and has demonstrated capability to carry and distribute the puck with pace, his level of familiarity with competing in the U.S. Division is a valuable element. Admittedly, we had our eye on him going back to his WHL Draft season. Depth on our blueline is a necessary need to address, and we’re confident about his capacity to become an ideal fit.”

Ashton last season spent the entire campaign with the Seattle Thunderbirds where he had seven assists in 41 games along with 27 penalty minutes. The 5-foot-11, 176-pound defenseman scored his first WHL goal with the Thunderbirds Jan. 8, 2019 at Saskatoon and has spent parts of three seasons with Seattle and Saskatoon, earning ten points in 78 career WHL games while suiting up in four WHL Playoff games with Seattle in 2018-19.

The native of Calgary, Alberta was originally acquired by Seattle from Saskatoon on Jan. 2, 2019 with a fifth round selection in the 2022 WHL Draft in exchange for defenseman Reece Harsch, and was selected by the Blades in the third round (50th overall) in the 2016 WHL Draft.

Ashton was an Alberta Cup champion and tournament All-Star selection in 2015-16 and next season was a Second Team All-Star Selection with the Calgary Buffaloes U18 AAA program (AMHL), posted five points (3g-2a) at the Macs Tournament, and earned a gold medal with Team Alberta at the 2016 Western Canada U16 Challenge Cup. He led the Buffaloes blueline with 31 points (5g-26a) in 35 games in 2017-18 and posted 59 points in 67 games in his AMHL career.

The Silvertips full roster for 2020-21 training camp and regular season schedule is expected to be announced soon.