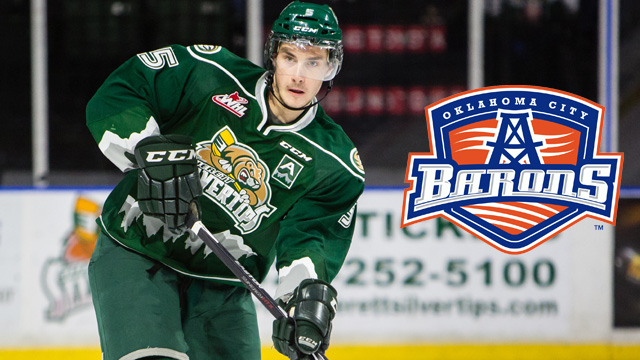 EVERETT – Everett Silvertips defenseman and Edmonton Oilers prospect Ben Betker has been assigned to Edmonton’s top affiliate, the Oklahoma City Barons of the American Hockey League, for the remainder of their season.  Betker, 20, played out his junior eligibility with the Silvertips this season.

Betker was Edmonton’s sixth-round selection (#158 overall) in the 2013 NHL Draft following his rookie season with Everett.  The 6-foot-6, 220-pound defenseman signed an entry-level NHL contract with the Oilers on March 26, just before the start of the WHL Playoffs.  The Barons finished the season as the #6 seed in the AHL’s Western Conference and face the #3 San Antonio Rampage in a first-round playoff series starting Thursday.  Betker joins fellow Silvertips alumni Jujhar Khaira and Josh Winquist on the Oklahoma City roster.

Hailing from Cranbrook, British Columbia, Betker recorded career highs 25 assists, 31 points and a +19 plus/minus rating in 64 regular season appearances with Everett this year.  Serving as an alternate captain in his final junior campaign, he played his 200th WHL game on March 20 and became the first Silvertip in over four years to record four assists in one game back on January 16 against Spokane.  In 201 career games over three seasons with the Silvertips, he compiled 58 points on 14 goals and 44 assists to go with 265 penalty minutes.

The Silvertips are currently preparing for the WHL Bantam Draft on May 7 and starting preparations for the 13th season of Silvertips hockey in 2015-16.  To keep up with all the latest Silvertips news and information throughout the offseason, visit www.everettsilvertips.com, “like” the Everett Silvertips Hockey Club on Facebook or follow @WHLSilvertips on Twitter.