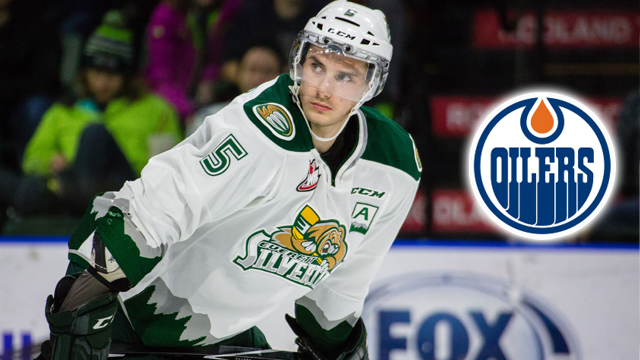 EVERETT – The NHL’s Edmonton Oilers today announced the signing of Everett Silvertips defenseman Ben Betker to a three-year entry level contract.  Betker, 20, was selected by Edmonton in the 6th round (158th overall) of the 2013 NHL Draft following his rookie season with the Silvertips.

Hailing from Cranbrook, British Columbia, Betker recorded career highs of 25 assists, 31 points and a +19 plus/minus rating in 64 regular season appearances with Everett this year.  He played his 200th career WHL game last Friday in Victoria and became the first Silvertip in over four years to record four assists in one game back on January 16 against Spokane.

The 6-foot-6, 220-pound blueliner has played 201 regular season games with the Silvertips over the past three seasons, compiling 58 points on 14 goals and 44 assists to go with 265 penalty minutes.  He also has two assists in 11 career playoff games.  Originally acquired from Portland in a May 2012 trade, Betker also has served as an alternate captain throughout his overage season with Everett.

The Silvertips face the Spokane Chiefs in a best-of-seven first-round WHL Playoff series starting Friday night with Game 1 at 7:35 at XFINITY arena.  Game 2 follows Saturday night at 7:05 before the series shifts to Spokane for Games 3 and 4.  Playoff packages and single-game tickets for both of Everett’s first two home games are on sale now.