Blazers storm ahead to drop Silvertips 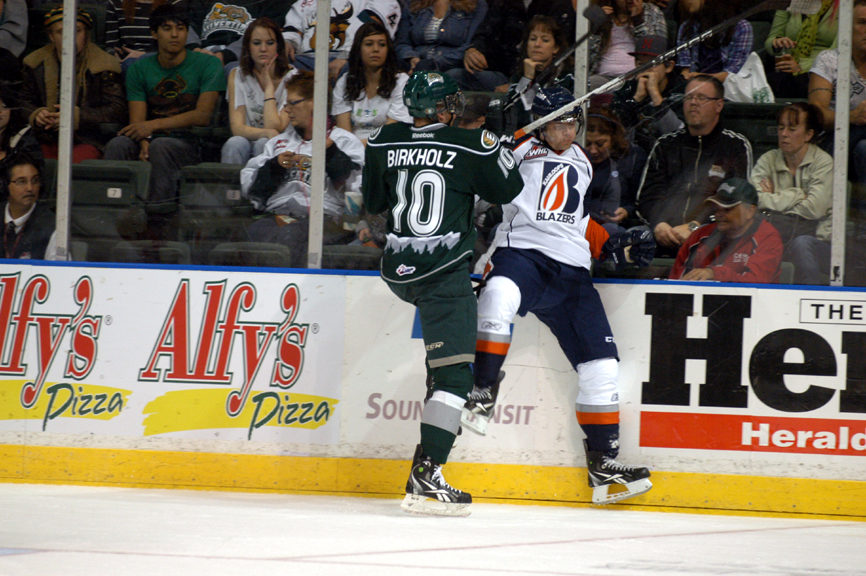 EVERETT, WA – The Kamloops Blazers scored three unanswered goals before adding a late empty-netter on their way to a 5-2 defeat of the Everett Silvertips Saturday night at Comcast Arena.  The loss puts the Silvertips at 1-2-0-2 for the season going into another home game Tuesday night against the Prince Albert Raiders.

Josh Birkholz continued to shine offensively for the ‘Tips, scoring a goal and assisting on the other by Jesse Mychan as Everett actually led 2-1 late in the second period.  A pair of Matt Needham powerplay goals in the final minutes of the second then put Kamloops ahead to stay.  The Blazers outshot the Silvertips 38-19 for the night.

The Blazers were first to get on the board when Dylan Willick capitalized on a loose puck in front of the net to make it 1-0.  Josh Birkholz helped the Silvertips tie the game at one just four minutes later, dancing through the Kamloops defense and ripping a shot off the post before Jesse Mychan banged home the rebound at 8:49.  The first 20 minutes would end in a tie as neither team could find the back of the net for the remainder of the period.

Birkholz scored a power play goal off a cross-ice feed from Tyler Maxwell to give the ‘Tips a 2-1 lead midway the second period.  Needham’s first powerplay tally tied it at two with 2:58 to go in the second, but he would add another with less than eight seconds remaining in the period to put the Blazers on top going into the third.

Everett couldn’t manage to knot the score in the third and then Kamloops would go ahead by two on Willick’s second goal of the night, which made it 4-2 with less than four minutes remaining.  Jordan DePape added an empty net goal in the closing seconds to give the Blazers the 5-2 victory.

Kent Simpson (1-2-0-1) took the loss despite making 33 saves in goal for the ‘Tips.  Cole Cheveldave (2-0-0-0) stayed unbeaten in two starts for the Blazers with 17 stops.  Everett had only two powerplays in the game and scored on one, while Kamloops finished 2 for 6 with the man-advantage.

The Silvertips are home again at 7:05 pm Tuesday night hosting the Price Albert Raiders.  The Saskatoon Blades will then visit Comcast Arena Friday night as the ‘Tips close a four-game homestand before traveling to Spokane to face the Chiefs next Saturday.