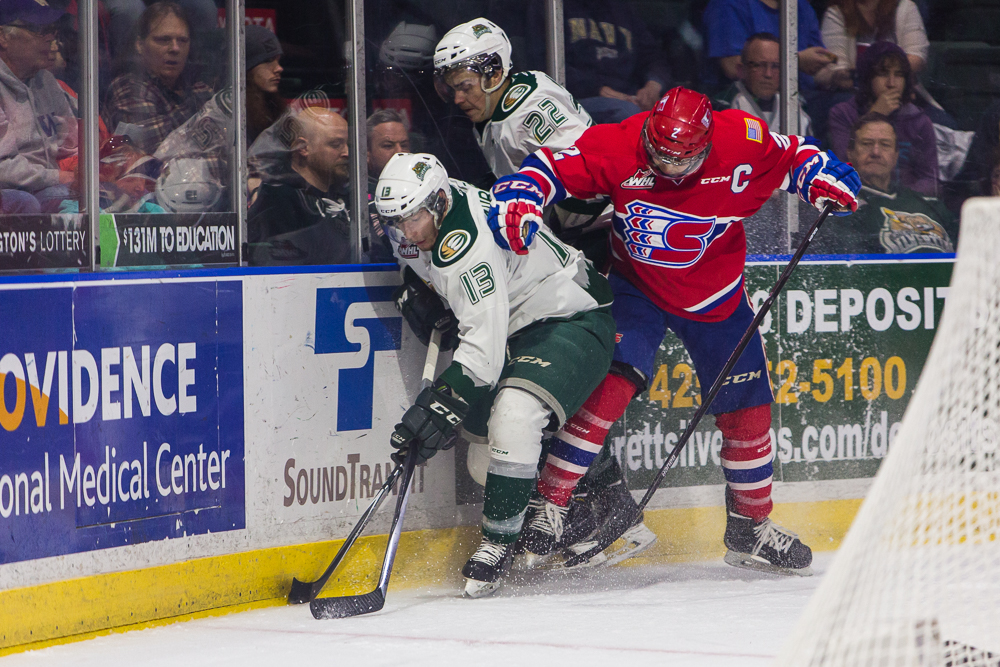 EVERETT – The Everett Silvertips scored three second-period goals to hold the lead, but the Spokane Chiefs kept their season alive with a goal late in regulation and another in overtime to take a 4-3 victory in Game 5 of their first-round playoff series Saturday night at XFINITY Arena.  The ‘Tips still lead the series 3-2 and will have another opportunity to clinch the series victory in Game 6 Tuesday in Spokane.

With a goal and assist on the night, Carson Stadnyk took over the series scoring lead with seven points (4g/3a).  Kohl Bauml also recorded a goal and an assist, while Brayden Low rounded out the goal scoring with his third in as many games.  The Silvertips powerplay went 1-for-5, while the penalty killing unit denied Spokane a goal on their only attempt.

The first period was evenly matched as both teams searched for the first goal of the game.  On the Silvertips second powerplay of the game, Ivan Nikolishin narrowly missed the net on a golden opportunity to open the scoring and Brayden Low was also stopped by Garret Hughson on a prime chance.  Everett held a 7-3 advantage on the shot clock midway through the period before Spokane found the back of the net on a backhand shot by Markson Bechtold in front gave the Chiefs a 1-0 lead after 20 minutes.

Everett headed to the powerplay early in the second after Spokane’s Evan Fiala was given a major penalty for kneeing.  Carson Stadnyk redirected a shot from Noah Juulsen 30 seconds into the major to tie the game at one.  The Silvertips couldn’t capitalize on the remaining powerplay time to get their first lead of the game, but eventually did as Brayden Low jammed in his own rebound after a Logan Aasman centering pass to give Everett a 2-1 lead.  Liam Stewart slipped a shot between the legs of goaltender Carter Hart from a tight angle to tie the game a minute later, only to see the ‘Tips re-take the lead when Jake Mykitiuk’s wraparound try found Kohl Bauml for the finish in front to restore the Silvertips lead at 3-2.

Action was tense as the Silvertips carried the one-goal lead into the middle of the third.  Spokane picked up their play and eventually tied the game at three with just 2:18 left in regulation on a Nick Charif shot through traffic.  The late goal forced overtime play with the Spokane holding a 35-31 advantage on the shot clock through regulation.

Overtime action featured great scoring chances for both sides that could have ended the game at any time.  The Silvertips had quality chances as the line of Low, Remi Laurencelle and Nikita Scherbak nearly created multiple close calls, but the puck eluded the back of the Spokane net.  Less than five minutes remained in the first OT when Riley Whittingham tipped a centering pass just past the skate of Carter Hart and in to win it for Spokane.

The series moves back to Spokane Arena for Game 6 on Tuesday, where the ‘Tips will again look to clinch the series and Spokane will attempt to force a Game 7 Wednesday night in Everett.  Puck drop is set for 7:05 pm, with pregame radio broadcast coverage starting at 6:30 on Fox Sports 1380 AM.