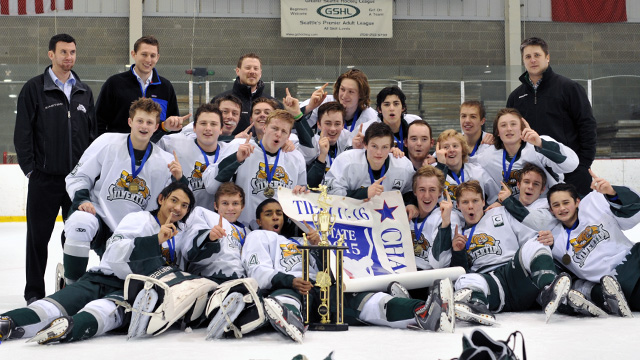 EVERETT – The Everett Junior Silvertips 16U AAA team won the Washington State Tier 1 Championship Sunday afternoon, going undefeated during the tournament over the weekend at Kent Valley Ice Centre.  The victory propels the Jr. Silvertips to the Pacific District Championship in San Jose, California, where they will compete against the top teams from Alaska and California March 5-8 for the right to compete in the U.S. National Championships.

The Jr. ‘Tips faced Sno-King and Kent Valley twice each in pool play over the weekend, beating both teams twice to advance to Sunday’s Championship game.  Facing Kent Valley once again for the title, the Jr. Silvertips outshot the Rainiers 50-19 to cap off their State Championship run with a 4-0 victory.  The Jr. ‘Tips outscored their opponents by a combined 23-5 margin on their way to a 5-0 weekend.