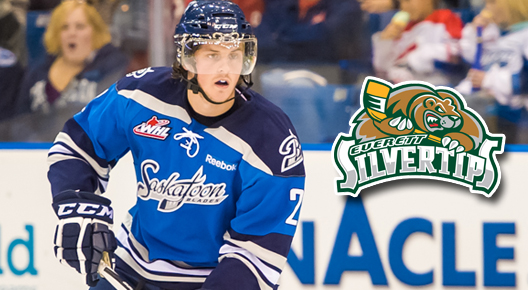 EVERETT – The Everett Silvertips today announced the acquisition of overage defenseman Matthew Pufahl and a fifth-round pick in the 2015 WHL Bantam Draft from the Saskatoon Blades in exchange for defenseman Ayrton Nikkel.  Pufahl becomes the fourth 1993-born player on Everett’s roster ahead of next season, joining forwards Manraj Hayer, Reid Petryk and Josh Winquist.

Pufahl, who turns 20 next month, shattered previous career highs in every statistical category last year with the Blades.  He produced 43 points on six goals and 37 assists in 69 regular season games, good enough for second among Saskatoon defensemen and seventh overall on the club.  He also finished second on the team with 25 powerplay points (5g/20a) in addition to a +11 plus/minus rating and 21 penalty minutes.

A native of Saskatoon, Saskatchewan, Pufahl was originally a fourth-round pick (68th overall) of the Red Deer Rebels in the 2008 WHL Bantam Draft.  The 6-foot-2, 200-pound blueliner broke into the league with the Rebels as a 17-year-old and played 30 games in Red Deer the following season before being traded to Saskatoon in December 2011.  In 144 career WHL games, Pufahl has produced 58 points on eight goals and 50 assists.  He boasts a +23 career plus/minus rating, 53 penalty minutes and has also scored one goal in nine WHL playoff appearances.

“We’re very happy to add a 20-year-old defenseman who had a great experience on a Memorial Cup team last season,” said General Manager Garry Davidson.  “We were lacking some experience on the back end for next year, and that’s exactly what Matt brings us.  He is coming off a good season statistically, but understands the rebuild that is happening now in Saskatoon.  I think he’s excited about coming here and becoming a key part of a team that is looking to make big strides next year.”

“Of course you have to give something up to get something, and we had to give up a good defenseman in Ayrton Nikkel.  He was originally drafted by Saskatoon and enjoyed his short time there, so he’s going back to a place where I know he feels comfortable.”

Nikkel, 17, was a second-round choice of the Blades (#42 overall) in the 2010 bantam draft.  He appeared in only one game with Saskatoon however before heading to Brandon in the blockbuster trade involving star forward Brayden Schenn.  After 102 games with the Wheat Kings, the Kelowna, British Columbia, product came to Everett at the WHL’s trade deadline in January.  He played only seven regular season games for the Silvertips last year due to injury, totaling 30 penalty minutes and no points.  Nikkel returned to play three postseason games for the ‘Tips, notching one assist and 11 penalty minutes.