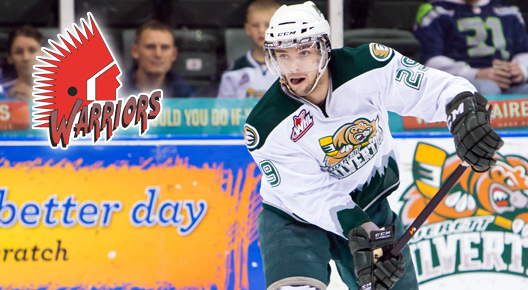 EVERETT – The Everett Silvertips today announced a trade that finds 1995-born defenseman Austin Adam heading to the Moose Jaw Warriors in exchange for a conditional selection in the 2015 WHL Bantam Draft.  As many as seven defensemen who played for the Silvertips last year could return to the club for the 2014-15 season.

Adam, 19, spent the past three years in Everett, skating in 127 Silvertips games since debuting as a 16-year-old during the 2011-12 season.  The 6-foot-6, 200-pound defender registered one goal and three assists in each of the last two regular seasons, giving him 11 points (4g/7a) and 46 penalty minutes in his WHL career.  He also played ten playoff games with the Silvertips, notching one assist and eight penalty minutes in the postseason.  Hailing from Surrey, British Columbia, Adam was Everett’s fourth-round pick (68th overall) in the 2010 WHL Bantam Draft.

“Austin is a quality young man who has contributed to our program for the past three seasons, but we felt that a change of scenery would be good for him at this point in his career,” said Silvertips General Manager Garry Davidson.  “We believe that Moose Jaw can afford him more and continued opportunities to further develop as a player.  I’d like to thank Austin for his work in Everett and wish him all the best in the future.”

The 2014-15 WHL regular season schedule will be released on Wednesday, June 25, with the preseason schedule being announced the day before.  Visit everettsilvertips.com throughout the offseason for news and updates on our summer appearances, the NHL Draft, CHL Import Draft and much more.  For more information, call the team office at 425-252-5100, “like” the Everett Silvertips Hockey Club on Facebook or follow @WHLSilvertips on Twitter.