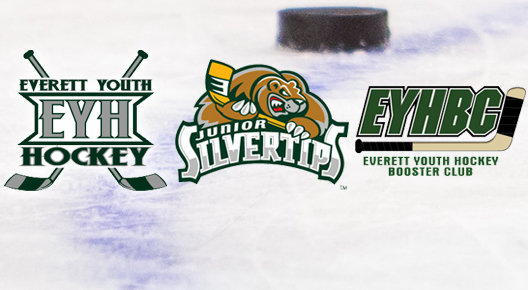 EVERETT – The Everett Silvertips and Everett Youth Hockey want to remind you that a new round of EYH Competition Camps starts next week at the Comcast Community Ice Rink.  EYH is also hosting tryouts for the new Junior Silvertips 16U Elite Tier I team and the EYH Booster Club is excited to hold another “Try Hockey Free” day this weekend!

The EYH Competition Camps are part of a series of youth hockey camps being held in Everett this summer.  “Hockey 101” camp is perfect for beginner hockey players to learn the basics of skating and puck skills, while “Skill Builders” camp helps young players further develop their skating and ability with the puck.  New sessions for both camps begin June 10 and will feature some of the leading hockey instructors in the region.

Do you have a young hockey fan who is interested in lacing up the skates for the first time?  The Everett Youth Hockey Booster Club wants to invite you to another “Try Hockey Free” day this Saturday at the Comcast Community Ice Rink.  Equipment will be provided to allow your child an opportunity to step on the ice free of charge and try playing hockey for the first time.  The session starts at 2:15 pm, so CLICK HERE for more information or to register your young athlete today!

EYH is also proud to host its first tryouts for the newly-formed Junior Silvertips 16U Elite Tier I team this weekend at Comcast Community Ice Rink.  Starting Friday afternoon and continuing through Sunday morning, eight on-ice sessions will help EYH coaches and officials select players to represent western Washington as the Junior Silvertips make their North American Prospects Hockey League debut next season.  More on the 16U Tier I tryouts is available at the Everett Youth Hockey website:  www.eteamz.com/jrsilvertips.

Visit everettsilvertips.com throughout the offseason for news and updates on team appearances, the WHL schedule release, NHL Draft and much more.  For more information, call the team office at 425-252-5100, “like” the Everett Silvertips Hockey Club on Facebook or follow @WHLSilvertips on Twitter.