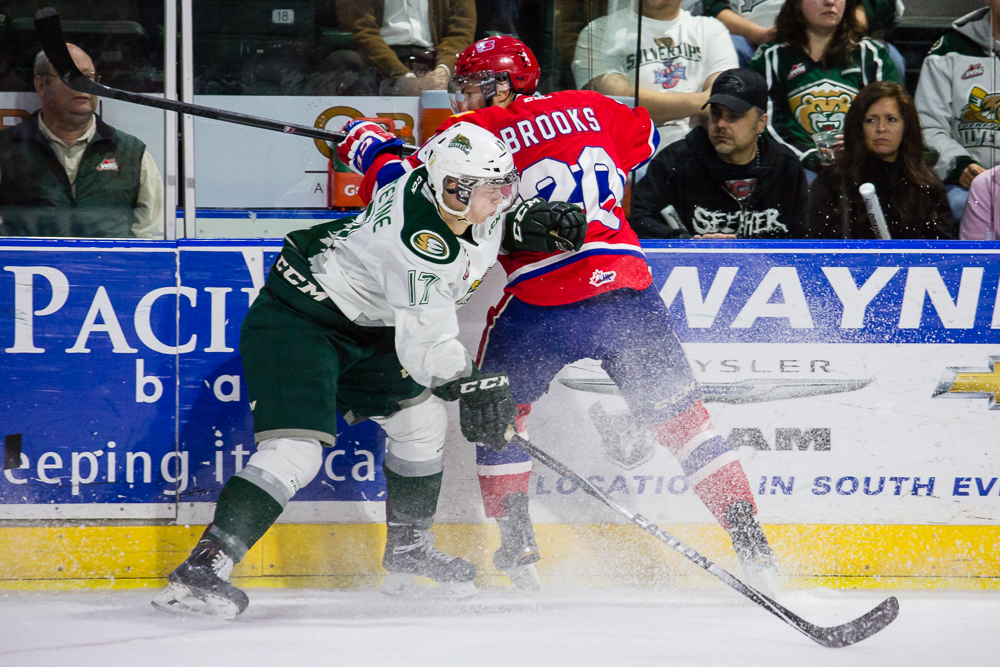 EVERETT – The Spokane Chiefs scored four goals in a six-minute span of the first period to build a lead they would not relinquish as the Everett Silvertips suffered a 6-2 loss in Game 2 of their first-round playoff series Saturday night at XFINITY Arena. The series is now tied 1-1 as the teams travel to Spokane for Game 3 Wednesday night and Game 4 on Friday.

Cole MacDonald notched the first goal for Everett and Matt Fonteyne picked up the second as the ‘Tips cut into the deficit late in the third period.  Ivan Nikolishin followed up Friday’s multi-goal game with an assist and Nikita Scherbak posted his first playoff point to join Remi Laurencelle and Kohl Bauml with helpers as well.  Another penalty-filled affair found the ‘Tips converting 1 of 7 powerplay opportunities, while the Chiefs were successful on 3 of 9.

The first period started with fast-paced playoff intensity as Everett jumped out to an early 8-4 lead on the shot clock.  Despite an edge in shots, the ‘Tips faced a deficit after Jackson Playfair’s wrist shot found the back of the net for Spokane.  Everett’s hole only continued to grow as the Chiefs got a powerplay goal from Dominic Zwerger just over two minutes later and then Adam Helewka scored twice to finish a six-minute barrage that gave the visitors a 4-0 lead after one.

Everett looked to dig out of the hole in the second as Dawson Leedahl fought back with a shorthanded chance that drew a Spokane penalty for 4-on-4 hockey.  The back of the net continued to elude the Silvertips despite a 12-10 shot edge in the period, but Everett held the Chiefs off the board to keep the deficit at four.  Shots on goal were 25-24 for Spokane through 40 minutes.

Needing a third period comeback, the frame didn’t start off well for the ‘Tips as Zwerger scored an early goal and then Jason Fram followed with another powerplay marker to make it 6-0. The Silvertips finally find the back of the net late in the third as Ivan Nikolishin found Cole MacDonald on the rush to get Everett on the board.  Back on the powerplay, Kohl Bauml worked hard along the boards to get the puck to Matt Fonteyne for the ‘Tips second goal of the night before the Chiefs finished off the 6-2 victory.

Everett goaltender Carter Hart (1-1) stopped 5 of 8 shots during 11 minutes in net, while Austin Lotz turned away 26 of 29 shots faced in the final 46 minutes.  Spokane goaltender Garret Hughson (1-1) made 29 saves to earn the win.

The series now shifts to Spokane Arena for Game 3 on Wednesday and Game 4 on Friday.  Both games start at 7:05 pm with pregame radio broadcast coverage starting at 6:30 on Fox Sports 1380 AM.  The ‘Tips and Chiefs will then return to XFINITY Arena for Game 5 on Saturday, April 4 at 7:05 pm.