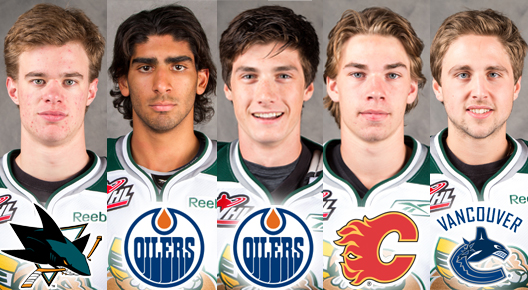 Betker and Khaira, both 19, have been in Jasper, Alberta since last week for an Oilers Orientation Camp that concludes on Monday.  Khaira was Edmonton’s third-round pick (63rd overall) in 2012 and was assigned to Everett after leaving Michigan Tech University to sign with the Oilers last summer.  Betker was chosen in the sixth-round (158th overall) of the 2013 Draft following his rookie year with the Silvertips and has yet to sign a pro contract.

Leedahl, 18, accepted a try-out agreement to attend Calgary’s Development Camp after going unselected in his first year of draft eligibility in 2014.  Flames camp began last Friday and continues through the final scrimmage on Wednesday, July 9.

Lotz, 19, joins the Canucks’ Prospects Development Camp this summer after attending training camp with the Carolina Hurricanes prior to last season.  The fourth-year Silvertips goaltender joins 35 other prospects at the University of British Columbia on Monday to start the camp, which concludes with a 4-on-4 tournament on Friday.

A few recent Silvertips alumni are also getting opportunities at NHL Development Camps.  Last year’s leading scorer and team MVP Josh Winquist, who has signed an AHL contract with the Edmonton-affiliated Oklahoma City Barons for next season, is at Oilers camp along with Betker and Khaira.  2013-14 Everett captain Matt Pufahl and former Silvertip Reid Petryk, who was traded to Edmonton early last season, are in camp with the Colorado Avalanche as well.  Both have spent time with Colorado’s AHL affiliate on amateur tryout agreements.

Visit everettsilvertips.com throughout the offseason for news and updates on our summer appearances, the upcoming Street Hockey Tournament, promotional calendar release and much more. For more information, call the team office at 425-252-5100, “like” the Everett Silvertips Hockey Club on Facebook or follow @WHLSilvertips on Twitter.