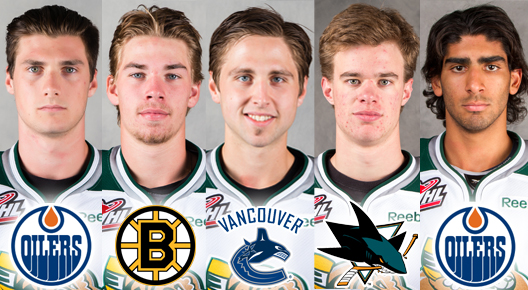 EVERETT – Three players who have been with the Everett Silvertips since training camp depart this week to attend NHL Training Camps, with Edmonton prospect Ben Betker joining the Oilers and invitees Dawson Leedahl (Boston Bruins) and Austin Lotz (Vancouver Canucks) getting tryout opportunities.  Also heading to NHL camps are signed prospects Mirco Mueller (San Jose Sharks) and Jujhar Khaira (Edmonton Oilers), both of whom are eligible to return to Everett this year but could play professionally and have not yet joined the team this season.

Betker, who turns 20 later this month, will once again don the Edmonton oil drop in the annual Young Stars Classic tournament featuring the Oilers, Calgary Flames, Vancouver Canucks and Winnipeg Jets from Sep. 12-15 in Penticton, BC.  A sixth-round pick of the Oilers (158th overall) in the 2013 NHL Draft, Betker is preparing for his overage season in the WHL while also working toward an NHL contract.  The Cranbrook, BC native totaled 21 points (7g/14a) and 102 penalty minutes in 68 appearances for the ‘Tips last season.

Leedahl, 18, accepted an invitation to Boston Bruins Rookie Camp after attending summer Development Camp with Calgary in July.  Leedahl will report to Wilmington, MA and then travel to the Nashville Predators’ practice facility in Antioch, TN, where the Bruins play rookie games against Florida, Nashville and Tampa Bay prospects through Sep. 16.  He is eligible for the 2015 NHL Draft after going unselected in his first year of eligibility this year.  From Saskatoon, SK, Leedahl compiled 32 points (8g/24a) and 66 penalty minutes in 70 games with Everett last year.

Lotz, 19, who took part in rookie camp with the Carolina Hurricanes last year, also heads to the Penticton tournament to join the Canucks after attending Prospects Development Camp with Vancouver over the summer.  The St. Adolphe, Manitoba product has been ranked by NHL Central Scouting ahead of the last two entry drafts, but remains available going into his fourth WHL season.  Lotz is coming off a career season in which he posted a 31-18-3-2 record, 2.53 goals-against average, .905 saves percentage and five shutouts for the ‘Tips.

Mueller was San Jose’s first-round selection (18th overall) in the 2013 NHL Draft.  Entering his 19-year-old season, the Swiss defenseman is eligible only to play in the NHL for the Sharks or return to Everett for a third season in the WHL.  Sharks Rookie Camp features a pair of “futures” games against Anaheim Ducks prospects over the weekend, with main training camp to follow starting on Sep. 19.  San Jose opens the NHL regular season at Los Angeles on Oct. 8.

Khaira, 20, is eligible to play in the NHL or in Edmonton’s minor-league system this season, making it less likely that he would be returned to the Silvertips.  A third-round draft pick (63rd overall) in 2012 who signed prior to last season, he will accompany the Oilers to the Penticton Young Stars tournament before likely returning to Edmonton for main training camp.  If Khaira does not make the Oilers’ NHL roster, he may be headed to their American Hockey League affiliate: the Oklahoma City Barons.

The Silvertips conclude their 2014 exhibition schedule with a home-and-home series against the Seattle Thunderbirds this weekend.  The ‘Tips host their rivals at 7:35 pm Friday at Comcast Arena and travel to the ShoWare Center in Kent on Saturday for their preseason finale.