Five Silvertips Off to NHL Camps 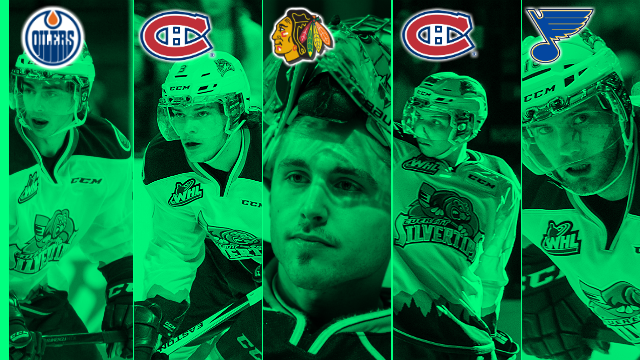 EVERETT, Wash. – The Everett Silvertips today announced five players, either currently on their preseason roster or eligible to play this season in the WHL, scheduled to attend training or rookie camps throughout the National Hockey League which begin this week.

The players skating in camps with NHL teams are as follows:

Davis, 18, has 135 games of WHL experience – all in a Silvertips uniform – while collecting 35 points (4g-31a) and a goal and two assists in 19 career postseason games. As Everett’s first round selection (11th overall) in the 2012 WHL Bantam Draft, he represented Canada (Team Pacific) in international competition, suiting up in six games at the World Under-17 Hockey Challenge during the 2013-14 season. Last year, the 6-foot, 180-pound defenseman was fourth among Silvertips blueliners in points (25) and assists (22) in 64 games while adding a goal and two assists in 11 postseason games.

Juulsen, 18, was Montreal’s first round selection (26th overall) at the 2015 NHL Entry Draft and comes off a career-high 52 points (9g-43a) in 68 games from last season, leading all Silvertips blueliners while ranking tied for eighth among the league’s defensemen in scoring. He also posted three power play goals and his +22 rating was second on the club. The 6-foot-2, 185-pound defenseman skated in last season’s CHL Top Prospects Game, was invited to Canada’s National Junior Team summer development camp in July, and signed a three-year contract with the Canadiens on July 9. He is one of 17 players in Silvertips history to be drafted by an NHL club and last season was named recipient of the team’s Most Dedicated Player award.

Lotz, 20, enters his overage year with 164 games of WHL experience – all with the Silvertips – along with a record of 73-61-15 record, goals-against-average of 3.04, save percentage of .900 and ten shutouts. He went 25-15-4 last season with a .901 save percentage and four shutouts, helping guide the Silvertips to a U.S. Division championship. Lotz will be attending an NHL training camp for his third straight year, previously skating with Vancouver (2014) and Carolina (2013).

Scherbak, 19, was Montreal’s first round selection (26th overall) in the 2014 NHL Entry Draft and followed with a career-high 82 points (27g-55a) in 65 games, his first season in Everett after being acquired from Saskatoon on Sept. 22, 2014 in exchange for goaltender Nik Amundrud, a first round selection in the 2015 WHL Bantam Draft and a second round selection in the 2016 draft. The 6-foot-2, 204-pound right winger led the Silvertips in scoring last season and is currently not listed on the club’s preseason roster but eligible to return to Everett this season.

Stadnyk, 20, enters his overage year as a free agent invitee to St. Louis’ camp, following last season’s output of a career-high 69 points (2nd, Silvertips), 27 goals and 42 assists in 71 games along with a +18 rating in 69 games. The 6-foot-2, 185 pound forward has 120 points in 215 career WHL games, including 13 points in 22 career postseason games. He was the Silvertips leading playoff scorer last season with nine points (4g-5a) in 11 contests and was co-recipient of the club’s “Iron Man” award.

The Silvertips return to play for Tri-City’s preseason tournament, beginning Thursday at Toyota Center against the Prince George Cougars at 11:00 a.m.