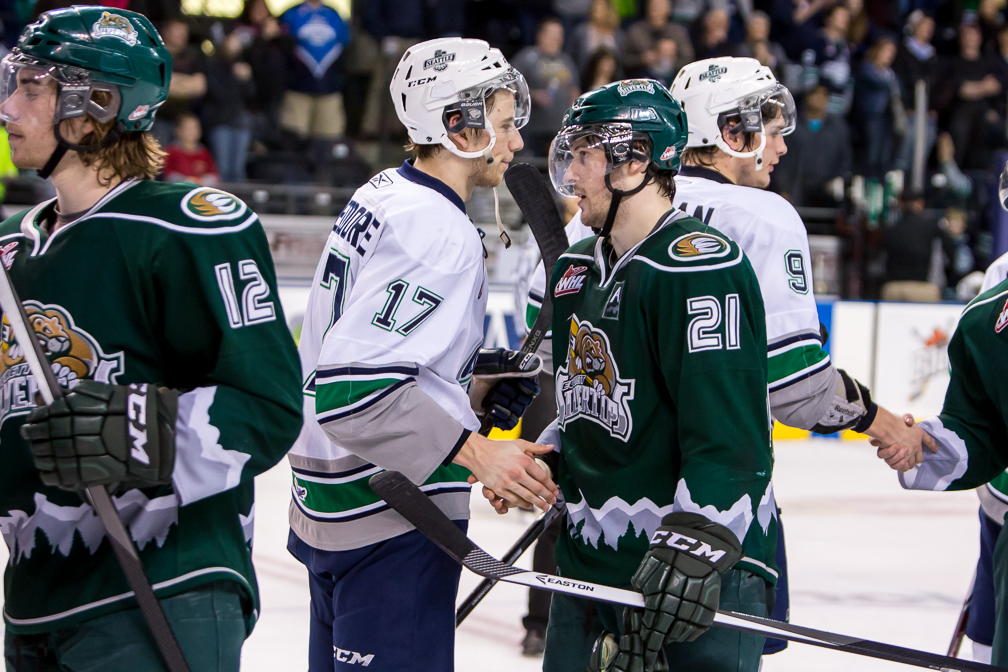 KENT – Facing elimination for the second straight night after Friday’s decisive Game 4 win, the Everett Silvertips saw their season come to an end with a 5-0 loss to the Seattle Thunderbirds in Game 5 of their first-round playoff series Saturday night at the ShoWare Center.  The Silvertips are eliminated from playoff contention after falling four games to one in the best-of-seven series, while the Thunderbirds advance to face Kelowna in the second round.

Only 24 hours after exploding for six goals in Game 4, the Silvertips were unable to light the lamp in Game 5.  Austin Lotz (1-4) kept Everett in the game until the third period however, finishing with 26 saves in a game that remained scoreless for nearly 33 minutes.  For the first time in the series, the ‘Tips were outshot 31-24 in Game 5.

Neither team registered a shot on goal until nearly four minutes into the first period, but both teams ended up generating double-digit shot totals as the period remained even.  Goaltender Austin Lotz had the best save of the period in its final minute, diving across the crease to deny a rebound chance and keep the game scoreless.  Shots were 11-10 in favor of the ‘Tips after the first 20 minutes.

Scoring chances were at a premium through most of the second period as Seattle went on to outshoot the Silvertips 9-5.  The T-Birds looked prime to take the lead when Shea Theodore snuck in to receive a weak-side pass alone in front, but Lotz made another big save on his blocker side to deflect the shot away.  Seattle did go on top 1-0 later in the period after Lotz had stopped a shot and saved the rebound only to see Scott Eansor lift a third chance into the top half of the net on his backhand to put the Thunderbirds on top.

The Silvertips then found themselves down by two only 1:15 into the third when Branden Troock slid a cross-ice pass under Lotz for a pivotal early goal.  Alexander Delnov put a low shot inside the far post from the top of the circle at 4:51 and then Troock netted his second of the period two minutes later to make it 4-0 in Seattle’s favor.  Mitch Elliot tacked on a late goal in the final minutes as the Thunderbirds advanced with the 5-0 win and five-game series victory.

Goaltender Taran Kozun (4-1) stopped all 24 shots he faced in net for Seattle.  For the only time in the series, special teams were a non-factor as Everett went 0 for 1 on the powerplay and the Thunderbirds were 0 for 2.

The Silvertips will now turn their attention to the 2014 offseason, with the WHL Bantam Draft just over one month away.  Log onto everettsilvertips.com throughout the offseason for news on community appearances, our Select-a-Seat event, the NHL Draft, 2014-15 WHL schedule release and much more.