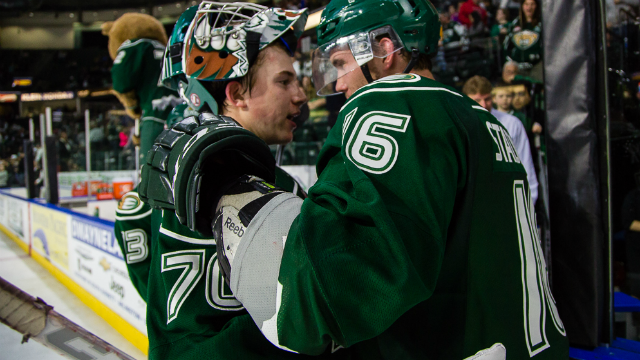 TONIGHT’S MATCHUP
The Silvertips host the Brandon Wheat Kings in the only matchup of the season between the two teams. The Silvertips are currently in the middle of a four-game homestand (1-1-0-0) and host Brandon for the first time since Nov. 1, 2013 when Brandon took the lone matchup, 6-3 at XFINITY Arena. The last time the two teams met was in Brandon on Jan. 6, 2015, a 5-0 Silvertips victory (Carson Stadnyk had the game-winning goal). The Silvertips will play in their second East Division matchup and previously defeated Prince Albert, 5-2 at XFINITY Arena on Oct. 11.

HEAD-TO-HEAD: CAPPING THE KINGS
The Brandon Wheat Kings are visiting Everett for the first time since 2013-14 and were defeated by the Seattle Thunderbirds last night, 7-2 in Kent, Wash. Brandon is second in the East Division, carrying a record of 8-3-0-2 (18 points), leading the league with a +21 goal differential and 57 goals this season. On the blueline, defenseman Ivan Provrov was selected in the first round (seventh overall) by the Philadelphia Flyers in the 2015 NHL Entry Draft while forward John Quennenville was selected in the first round (30th overall) by the New Jersey Devils in the 2014 draft.

LAST 3 GAMES:
EVT 2 – SEA 0 (10/24/15): Carter Hart made 32 saves for his sixth career shutout and Connor Dewar added a goal and an assist to lead the Everett Silvertips (5-3-0-0, 10 points) to a 2-0 victory over the Seattle Thunderbirds before a crowd of 7,311 at XFINITY Arena on Saturday. The Silvertips earned their third win in four home games, and snapped Seattle’s six-game winning streak. Lucas Skrumeda added a second period goal, while Hart’s shutout was his second of the season, following up a 25-save effort last night against Portland. He improved to 3-0 in three lifetime appearances against the Thunderbirds.

POR 2 – EVT 0 (10/23/15): Adin Hill recorded 31 saves for his second shutout of the season, lifting the Portland Winterhawks over the Everett Silvertips, 2-0 before 3,623 fans at XFINITY Arena on Friday. The Silvertips, who entered tonight with the least amount of games played in the WHL this season (and played just four times in the last 26 days), dropped their second straight loss despite a 25 save effort from Carter Hart.

POR 5 – EVT 1 (10/16/15): Evan Weinger scored twice and the Portland Winterhawks broke a tie game with four unanswered goals, skating by the Everett Silvertips, 5-1 before 4,586 fans at Veterans Memorial Coliseum on Friday night. The Silvertips (4-2-0-0) had their three game winning streak snapped, logging their only goal on the power play with a Patrick Bajkov finish in the second period. Adin Hill stopped 33 shots for Portland and counterpart Carter Hart stopped 36 shots, replaced late in the game by Mario Petit (5 saves).

STUCKY CELEBRATES A MILESTONE:
Silvertips equipment manager James Stucky is scheduled to work the 1,500th game in his career tonight. The native of Burien, Wash. has served the Silvertips in his capacity since the inception of the franchise in 2003, having previously worked in the American Hockey League with Cincinnati, in the IHL with Indianapolis and in the CHL with Memphis from 1993-2003.

LOVE CONQUERS ALL, AND WITH TEAM CANADA
Silvertips assistant coach Mitch Love, absent from the team this week, is currently serving Hockey Canada as assistant coach for the 2015 World Under-17 Hockey Challenge, Oct. 30-Nov. 7 in Dawson Creek and Fort St. John, B.C. Love is working with high-ranked players born in 1999 or later, eligible to compete for Canada with the National Men’s U-18 Team, National Junior Team and National Men’s Team.

ALUMNI UPDATE: BYRON FROESE
Byron Froese (2008-10) became the 14th player to suit up for the Everett Silvertips and play in the NHL, making his debut last Saturday with the Toronto Maple Leafs of the NHL. He skated at Bell Centre against the Montreal Canadiens, recorded a pair of shots on goal, two hits and five face-off wins in 12:50 of ice time and wore #56. With the Silvertips, Froese earned 118 points in 142 games before moving onto the Cincinnati Cyclones of the ECHL – where he had 80 points in 83 games and an Eastern Conference title. Last season, Froese collected 42 points in 46 games last season with the Marlies, and 3 goals in 4 games this season.

HART OF STONE
Silvertips goaltender Carter Hart, entering his second full season of play in the WHL, ranks among the league’s leaders in several goaltending categories since beginning his career with the Silvertips. Entering today, Hart leads the WHL in goals-against-average for the last two seasons.

WHL GOALS AGAINST AVERAGE LEADERS*, SINCE START OF 2014-15 SEASON:

PROSPECT UPDATE
BRETT KEMP (F): selected by the Silvertips in the second round (41st overall) in the 2015 WHL Bantam Draft. Kemp, 15, was selected to Team Saskatchewan for the 2015 Western Conference U16 Challenge Cup, beginning tonight in Calgary. Kemp was selected among the highest-rated players in the Under-16 category representing the four Western Canadian provinces of Alberta, British Columbia, Manitoba and Saskatchewan. Kemp was third in his league’s scoring last season with the Yorkton Terriers (Saskatchewan Bantam AA Hockey League) with 79 points (37g-42a) in 30 games.