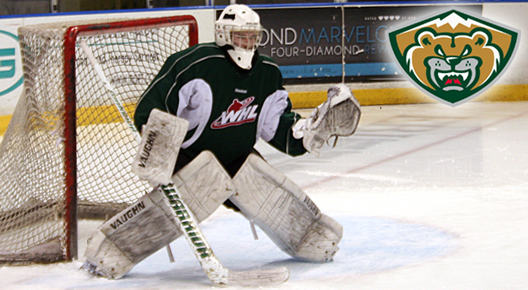 EVERETT – The Everett Silvertips today announced the signing of 1998-born goaltender Carter Hart to a Western Hockey League Educational Contract.  Hart is in Everett this week practicing with the Silvertips and will serve as the club’s backup goaltender through a set of three games in three days this weekend.

“We really believe that Carter has a bright future with us going forward and are happy to have him signed,” said Silvertips General Manager Garry Davidson.  “I saw quite a bit of him during his bantam year, and since then our Head Scout Bil La Forge and Edmonton-area scout Matt Beck have kept a close eye on him.  He’s having a great year in the Alberta Minor Midget League and we’ve been impressed not only by his play on the ice, but also the commitment he’s shown off the ice as well.”

Hart, 15, was Everett’s eighth round selection (158th overall) in the 2013 WHL Bantam Draft.  A native of Sherwood Park, Alberta, he is spending this season with the Sherwood Park Squires of the Alberta Minor Midget AAA Hockey League.  Hart is currently the top goaltender in the AMMHL, leading the league with a 1.92 goals-against average and four shutouts.  He ranks second with a .937 saves percentage on his way to compiling a 13-3-3 record with the Squires this season.

“I’ve been very impressed in the short amount of time I’ve worked with Carter so far,” said Silvertips Goaltending Coach Shane Clifford.  “Technically he’s very good and his mobility is off the charts.  He’s also a great kid who is always smiling and fun to be around.  He has a great attitude about life and hockey.”

The Silvertips play a pair of home games this weekend at Comcast Arena, hosting the Vancouver Giants Friday night at 7:35 and the Seattle Thunderbirds Saturday at 7:05 pm.  The ‘Tips then travel to Spokane to complete a three-in-three weekend against the Chiefs at 5:05 pm Sunday afternoon at Spokane Arena.

Silvertips flex tickets and Now & Later packs for the 2013-14 WHL season are available now at the team office. Visit our website or call 425-252-5100 for more information.  To keep up with all the latest team news, “like” the Everett Silvertips Hockey Club on Facebook or follow @WHLSilvertips on Twitter.