Hart: WHL Goalie of the Week 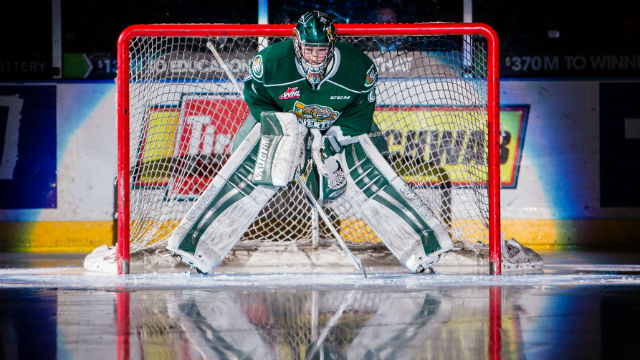 Hart, a 1998-born netminder from Sherwood Park, Alberta posted two wins to go with a 1.33 goals against average, a .944 save percentage, and one shutout. It is the second WHL weekly honor of his career.

Last Wednesday, Hart stopped 29 shots against the Spokane Chiefs in a 3-0 defeat and was named the game’s third star for his efforts. Two nights later in a rematch against the Chiefs, he turned aside 15 shots at XFINITY Arena to earn third star honors in the Silvertips’ 5-2 victory, holding the Chiefs without a goal on even strength situations for both games.

The following night, Hart stopped all 23 shots he faced to claim third star honors and guide the Silvertips to a 4-0 shutout win over the Swift Current Broncos and Jon Martin, who entered the game leading the WHL with 21 goals. For the Silvertips netminder, the shutout victory marked his third of the season.

Currently in his second full season with the Silvertips, Hart has posted a 28-11-2-5 record with seven shutouts in 48 career WHL regular season appearances. He is eligible for the 2016 NHL Entry Draft and was recently named to the NHL Central Scouting Service’s “Players to Watch” list in September.

The Silvertips start a four-game road trip tomorrow, visiting the Kootenay Ice at 6:00 p.m. (FOX Sports 1380/WHL Live). The game will be available via radio, WHL Live, TuneIn app and at the Silvertips Official Watch Party, hosted by Sporty’s Beef and Brew.