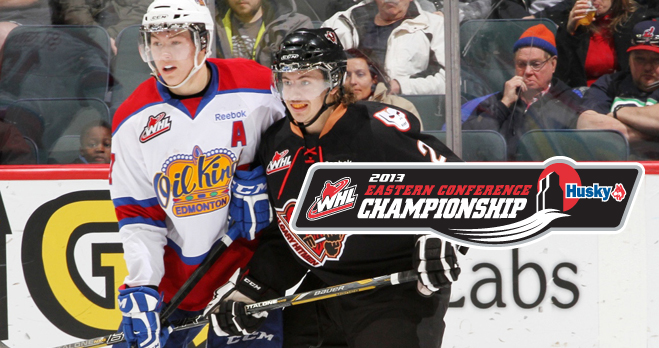 CALGARY, AB – The quest for the Ed Chynoweth Cup and a spot in the 2013 MasterCard Memorial Cup tournament in Saskatoon, SK, is now down to the final four teams as the 2013 WHL Conference Championship series’ get underway on Thursday, April 18th.

The Calgary Hitmen are back in the WHL Eastern Conference final for a fifth time over the last seven seasons, having eliminated the Swift Current Broncos and Red Deer Rebels in the first and second rounds.

Can the Oil Kings repeat as Husky WHL Eastern Conference champs and battle for the Ed Chynoweth Cup for a second straight season?  Or, will the Hitmen win the Battle of Alberta and dethrone the defending champions?

The Edmonton Oil Kings meet the Calgary Hitmen in the post-season for the second time since the modern-day Oil Kings came into the WHL in 2007-08.  Brandon Kozun and the Hitmen swept Brent Raedeke and the Oil Kings 4-0 in the first round of the 2009 WHL playoffs.

The Oil Kings advanced to the 2013 Husky WHL Eastern Conference Championship series after defeating Kootenay in five games in the opening round then sweeping Medicine Hat in four games in the second round, and have now won six consecutive playoff series’.  The Oil Kings have taken their play up a level in the post-season, dominating their previous two opponents both offensively and defensively.  Edmonton’s attack has produced 44 goals in nine games while converting 27% of their power play chances.  Top guns Michael St. Croix and Henrik Samuelsson are among five Oil Kings forwards averaging at least a point per game in the playoffs.  Yet, it is their offensive depth that has also stood out as all but one forward has found the net over their nine playoff contests.  Defensively, the Oil Kings have been near impenetrable, allowing only nine goals in nine games.  A huge reason for their defensive success has been a penalty killing unit that has allowed only two goals on 47 opposition power plays.  Griffin Reinhart, Keegan Lowe, and the rest of the Oil Kings’s defence corps will face a tougher test versus a Hitmen lineup that boasts great depth and talent.  Goaltender Laurent Brossoit has been outstanding through the first two rounds, posting a 0.97 GAA and a stellar .963 save percentage in nine games to go with three shutouts.  He appeared in all six regular-season meetings versus Calgary, but struggled to a 3.26 GAA and a .885 save percentage in those games.

The Hitmen are making their fifth appearance in the Husky WHL Eastern Conference Championship series over the last seven seasons, having eliminated the Swift Current Broncos in five games in the first round and the Red Deer Rebels in five games in Round 2.  Calgary’s offense found a way to get past two strong defensive Clubs in the Broncos and the Rebels in the first and second rounds.  Led by Victor Rask, the Hitmen got clutch scoring at key times from their veterans who helped them win four overtime games through the first two rounds.  While they can count on Rask and veterans Cody Sylvester, Brooks Macek and Brady Brassart for offense, they will need contributions from the likes of Jake Virtanen, Zane Jones, Greg Chase and others if they are to break down Edmonton’s rock-solid defense and goaltending.  The Hitmen proved equally strong defensively through the first two rounds, giving up just 18 goals in 10 games.  Veterans Alex Roach and Spencer Humphries now face the challenge of a far deeper Oil Kings’ attack that is averaging nearly five goals per game in the playoffs.  Chris Driedger has stepped up his play in the post-season, posting a 1.73 goals-against average and a .946 save percentage through 10 games to rank second behind Edmonton’s Brossoit in those categories.  Driedger will need to keep his run of excellent play going to give Calgary a chance at ousting the defending champs.