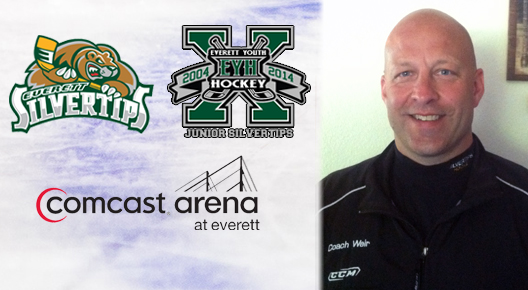 EVERETT – The Everett Silvertips, in conjunction with Global Spectrum and Everett Youth Hockey, today announced the hiring of longtime youth hockey coach and advocate Jerry Weir as the new General Manager of the Everett Youth Hockey (EYH) program.  Weir takes over day-to-day operations of EYH as part of the new strategic alliance announced earlier this week involving the Silvertips in management of the local youth hockey program.

“The appointment of Jerry Weir is the first of many steps we’ve got planned for the re-structuring of Everett Youth Hockey,” said Everett Silvertips General Manager Garry Davidson.  “We needed someone with the ability to be devoted 24/7 to the needs of EYH players and parents.  Jerry comes highly recommended to me and brings with him a great reputation for building beginner hockey programs.  His extensive background in both hockey and marketing give him the knowledge to help local youth hockey reach new heights in the coming years.”

Weir, 46, is an Everett native who attended Everett High School and the University of Washington.  He played his youth hockey in the region, skating at the junior level with the Seattle-based Northwest Americans of the Pacific Junior Hockey League.  Following a career in sales and marketing with Baden Sports and Radio Disney, he has spent the past 12 years becoming one of the top private instructors and youth coaches in the greater Seattle area.

“This is an exciting opportunity to grow the game of hockey in Everett and the Northwest,” said Weir.  “The Everett Silvertips are one of the top Major Junior franchises in North America and play in a premier facility.  EYH has a strong relationship with the City of Everett, our partners at Global Spectrum and Comcast Arena are first-rate, and we are supported by a volunteer booster club that is second-to-none.  All these elements will help move EYH forward as we plan on becoming a model youth hockey program with a focus on development for all ages and skill levels.”

Jerry has coached Major and Minor joint AAA PeeWee teams for the Seattle Junior Hockey Association (SJHA) and Sno-King Amateur Hockey Association (SKAHA), along with SJHA Representative Squirt Minor and Major teams.  He has served as Beginner Director, Player Development Director and Camp Director for SJHA and lead instructor for all Combo Skill Clinics and High Performance Rep Camps.  Weir has also excelled as a private instructor for players of all ages and skill levels, including local Silvertips bantam draft selections Daniel Woolfenden of Mill Creek and Connor Nobach of Stanwood.

Weir and the Silvertips have already begun the process of securing coaches, installing a Board of Directors and structuring new programs for the upcoming season.  EYH Co-Founder Christopher Raub will continue to work within the program in a redefined role relating to EYH operations.  CLICK HERE for information on an opportunity to meet Jerry at the 2013 EYH Kickoff & Cookout, presented by the Everett Youth Hockey Booster Club on Saturday, August 3.