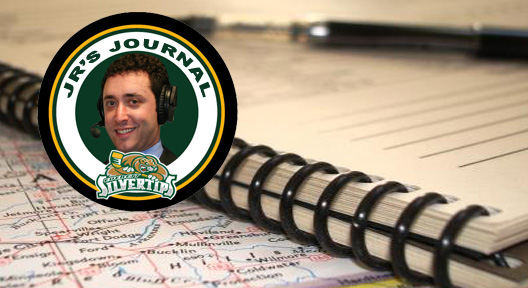 Well, that wasn’t too bad of a weekend to kick off hockey season, was it?

The ‘Tips followed up a gritty, come-from-behind, character-building win over the T-Birds on Friday with an aggressive forecheck and pressure game that led to a 5-2 win over Vancouver on Saturday.   That second period Saturday night in which the Silvertips outscored the Giants 4-1 was for the most part a strong example of the type of speed and pressure hockey that we hope will become a consistent hallmark of the way the Silvertips execute this season.  It should also be noted that the team found ways to put the puck in the back of the net – by scoring five goals on 26 shots, the team was able to bury the puck when given the opportunity, and we all hope that type of killer instinct continues as we head into the second week of the WHL season.

Several things that I noticed this past weekend:

Markus McCrea picked up exactly where he left off last year.  Markus’ development was evident in the second half of last season as he became more comfortable in his role as a physical power forward and heavy hitter.   The type of energy he brings to each shift was more than visible this weekend – it was tangible.  The boards shook and the building erupted with his hits along the glass, and his hard work led to a well-executed 2-on-1 with Tyler Giebel that finished with Giebel’s first career WHL goal  off a crisp feed from McCrea.

Campbell Elynuik had a strong weekend.  Aside from his goal and assist, he was also reliable on the forecheck all weekend long, which led to several scoring opportunities both for himself and his teammates.  Campbell was able to keep things simple and had success because of his hard work; he was hard on the puck all weekend long and showed off his potent spot and ability to cover large portions of the ice quickly.  Campbell’s goal – his first since a 7-3 win over Portland on February 18th, 2009 – was the exclamation point from a Ryan Murray effort in which he made a hit behind the Seattle net to win a loose puck before wrapping a pass around the near post, where it was buried by the third-year winger.

Nick Walters performed well in his first two games as a Silvertip.  Selected eighth overall in the 2009 WHL Bantam Draft, Walters is a player who looks to develop into a well rounded, two-way defenseman.  He came to the Silvertips with the reputation as someone capable of making big hits, which made his standout play on the power play back at the Holiday Inn Preseason Classic – in which he had three assists in three games – all the more remarkable.  He’s 16 years old, and there might be a few “welcome to the WHL” moments for the rookie, but after this weekend, there’s a lot of optimism in the career

of this solid blueliner.  He seemed cool under pressure, working well with his defensive partners in clearing out danger from behind his own net and making smart reads and good decisions.

The team will face two stern tests this coming weekend when the Kamloops Blazers and Lethbridge Hurricanes visit Comcast Arena.  Kamloops should be improved from a season ago, when they fared well in the second half of the season and tightened up their defense under Head Coach Guy Charron.  And the Lethbridge squad that squares off against Everett on Saturday is a young team that made a huge splash in their opening weekend, winning games on the road against always tough divisional foes Calgary and Medicine Hat.  I’ll continue to post my thoughts on the team’s performances after each weekend, and hope you continue to check out JR’s Journal throughout the season!